Morris doubles up to lock both X30 and KA100 Senior titles 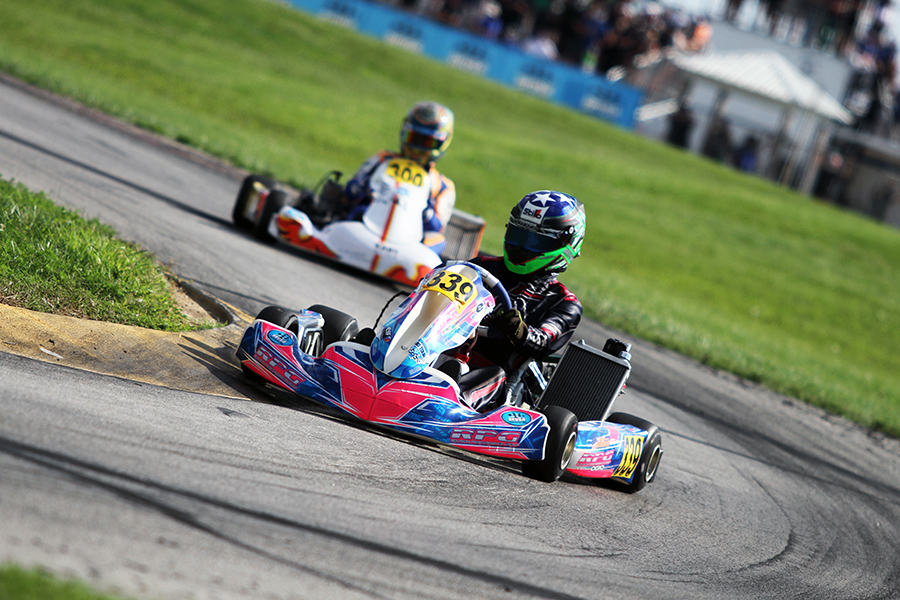 Bryson Morris locked up both the KA100 and X30 Senior championships with victories in Round Five (Photo: EKN)

The 2020 Superkarts! USA Pro Tour Summer Festival reached the penultimate round of the unique triple header, double-weekend format at the New Castle Motorsports Park. Round Five was contested around the ‘Reverse National’ course of the New Castle, Indiana facility on ‘Situation Saturday’ as the championship chases were either more defined, and for some, already locked up before heading into the series finale. Wet weather stayed away all day, providing perfect racing conditions for the 12 categories and eight race groups. 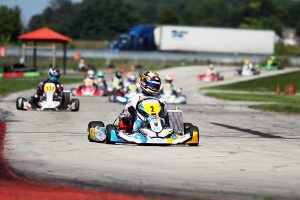 Coming off four wins in the opening weekend, Bryson Morris (RPG / Kosmic) was shut out of the podium in both X30 Senior and KA100 Senior on Friday for Round Four. Top-five finishes helped to keep the championship chases in good position heading into Saturday. Morris started the day with a stellar drive in the KA100 class. A pushback bumper penalty put him seventh on the grid for the main event. He fought his way up to third and was trailing the lead duo of Arias Deukmedjian (KSNA / WPK) and Luca Mars (SCR / Redspeed) by 1.5 seconds. Morris was able to reel them in with two laps remaining. Mars and Morris worked past Deukmedjian heading to the white flag and then Morris took the lead on the final circuit at the I-70 corner. Fighting for second behind him allowed Morris to drive away to the checkered flag for his third victory in five rounds, clinching the championship with one round remaining. Deukmedjian crossed the line in second but was penalized three seconds for jumping the start. That put Mars up to second, and Brandon Lemke (Franklin / Merlin) to third on the podium. Terrin Odom (MDR / Kosmic) was promoted to fourth and Hayden Jones (Nitro / Tony Kart) finishing fifth as Deukmedjian fell to sixth.

Morris grabbed his third victory in the X30 class at the end of the day, securing the championship as well. Starting fifth, Morris quickly put himself at the point, moving up to the lead by lap six. From there, he was able to pull away slowly from Prefinal winner Arias Deukmedjian (KSNA / Kart Republic) to a 1.2-second advantage. Four-time defending champion Ryan Norberg (RPG / Kosmic) muscled his way up from 12th to finish on the podium in third. Christian Brooks (Nash / WPK) ended up fourth with Luca Mars (SCR / Redspeed) up to fifth. 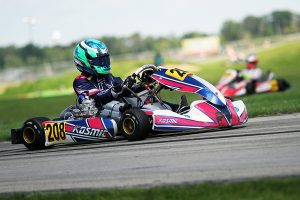 Pro Shifter welcomed a first two-time winner of the event with 2017 champion AJ Myers sweeping the action. Myers (Magik) was able to secure fast time in qualifying and lead every lap of the Prefinal and Final. Danny Formal (ANSA / Charles Leclerc) was able to escape in the second position with defending champion Kyle Wick (RPG / Tony Kart) winning the fight for third over Rory van der Steur (Magik). Round Four winner Jake French (PSL / Birel ART) improved to fifth. Josh Pierson (RPG / Kosmic) was able to record his second victory of the program with a sweep of Round Five in Pro Shifter 2. Pierson drove away to a 2.5-second advantage in the Final over Round Four winner Vicente Salas (Factory Kart). Anthony Freese (PSL / Birel ART) rebounded from a DNF in the Prefinal to a podium spot in third. Gavin Bayliff (Trinity / Birel ART) and Jason Henrique (Rivera / GFC) completed the top-five.

Scott Barnes (HMG / Intrepid) grabbed his third victory of the series in G1 to jump ahead in the championship chase. The Bermuda driver went unchallenged as two-time winner Joe Ruch (Race Factory) spun a rear gear, forcing him to the sidelines. Anthony Stiffler (HMG / CompKart) finished runner-up. The perfect score for Nathan Stewart (PSL / Birel ART) was broken up on the day by Justin Peck (RPG / Tony Kart). The SKUSA Winter Series champion edge out Stewart for fast time in qualifying. Stewart rebounded to win the Prefinal but an engine issue in the main event gave Peck the victory. Ken Schilling (Aluminos) finished runner-up. 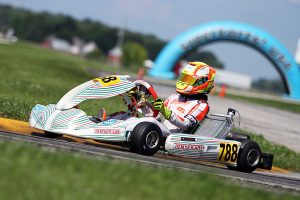 Scott Roberts earned his fourth victory in the X30 Master class. Miguel Mier (Crosslink / Exprit) set fast time in qualifying and won the Prefinal to lead the way early. Roberts (SCR / Redspeed) jumped up to the lead and led all 18 laps ahead of Mier for the win. Adam Pettit (Solo Kart) drove to third over teammate Salvo Sparacio with Ariel Castro (Birel ART) retiring at the start of the race. Nick Tucker (Nitro / Tony Kart) also won a fourth of the series in KA100 Master. Ron Jenkins (Nash / EOS) posted fast lap in qualifying but Tucker won the Prefinal. He along with Round Three winner Jonathan Silva (RPM / Tony Kart) fought for the top spot, with Tucker holding on to the checkered flag.

X30 Junior came down to a three-driver fight for the victory. Top qualifier and Prefinal winner Max Opalski (RPM / Tony Kart), Alex Stanfield (Crosslink / Exprit) and Carson Morgan (Tony Kart) got away from the rest of the field as Stanfield led the majority of the race. Morgan assumed the lead at the white flag and was able to hold on at the checkered flag for his first victory in the category. Stanfield finished second with Opalski crossing the line in third, only to be removed for a technical infraction. That move Brent Crews (KSNA / Kart Republic) to the third step of the podium. Frankie Mossman (Nash / Tony Kart) and Jack Jeffers (SCR / Redspeed) completed the top-five. 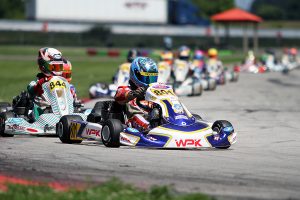 Brent Crews became the third different winner in the KA100 Junior class. Crews (KSNA / WPK) set fast time in qualifying but was put back to eighth in the Prefinal with a pushback bumper penalty. Two-time winner John Burke (Supertune / Tony Kart) took the race win. Both were among five drivers in the lead group with Crews jumping up to the point. Contact in the cell tower corner on the final lap between Westin Workman (TimmyTech / CompKart) and Carson Morgan (Tony Kart) took them out of contention. Crews led the final 13 laps, holding off Burke and Max Opalski (RPM / Tony Kart) for the victory. Logan Adams (Comet / Kosmic) improved five spots to fourth with Noah Baker (Supertune / Tony Kart) up five to fifth.

It was a championship performance by Parker DeLong (Nitro Kart) in the Mini Swift class for his third victory of the program. DeLong found himself back in 12th after qualifying but fought his way forward to the Prefinal win over top qualifier Caleb Gafrarar (PSL / Birel ART). DeLong, Salim Hanna (Montoya / Tony Kart) and Round Three winner Max Garcia (KSNA / WPK) were able to get away with Garcia leading the first 15 laps of the 16-lap Final. Garcia ran a defensive line throughout the final circuit with DeLong diving inside at turn 13. That created a three-wide run to the final corner with Garcia dropping off into the grass. DeLong came out of the corner with the lead, earning the victory by 73 thousandths of a second ahead of Hanna. The win secured enough points for the provisional championship heading into the finale. Garcia crossed the line in third with Gafrarar in fourth and Sebastian Wheldon (JC / Kosmic) in fifth. 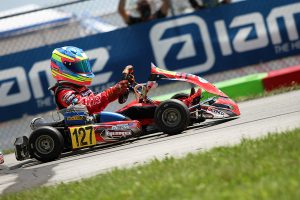 The Micro Swift category went down to the wire. Two-time winner Jack Iliffe (IRM / Tony Kart) won the Prefinal and led the majority of the Final. With two laps remaining, the top drivers began shuffling for the top spot. Vivek Kanthan (MDR / Kosmic) took over the point at the white flag, and jostling for position took part at the Scoreboard corner. Contact occurred with drivers going over-under, with Iliffe getting the worst of it. He climbed up the back of Round Two winner Kanthan and flipped. Top qualifier and Round One winner Asher Ochstein (Benik) slipped past for the top spot, earning his second victory. Kanthan continued on to finish second with Isaac Malcuit (Comet / Kart Republic) in third. Tristan Murphy (CompKart) and Caleb Tarter (Nitro Kart) completed the top-five.

Situation Saturday is complete and now sets the stage for Championship Sunday for the 2020 SKUSA Pro Tour Summer Festival. The 12 categories and eight race groups will complete the marathon that began on August 6 and will end on August 16 with one final round.