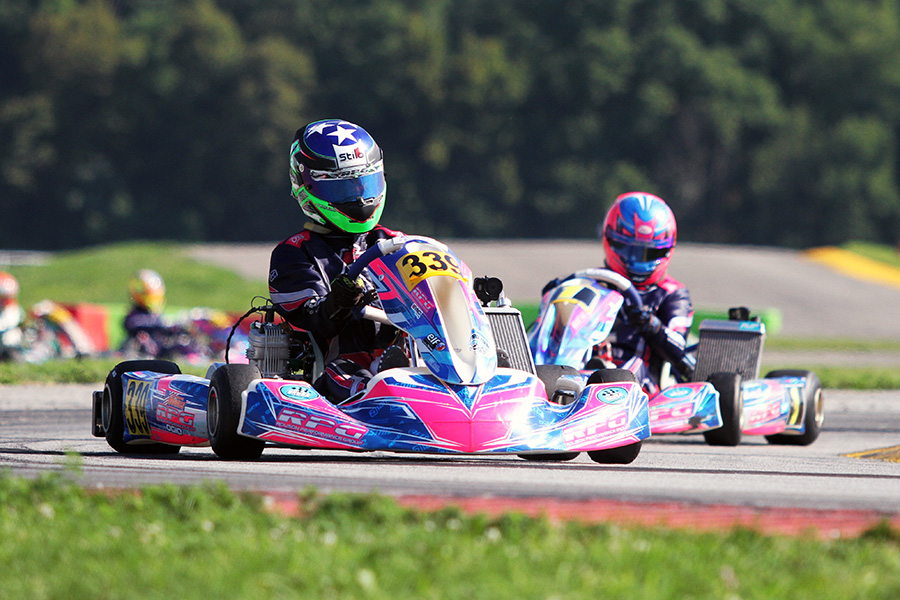 The third and final day of action to open the Superkarts! USA Pro Tour Summer Festival was conducted on Sunday at the New Castle Motorsports Park. Weather at the New Castle, Indiana facility was the warmest it had been all weekend long, with a rise in humidity but clear skies throughout the day to contest Round Three of this year’s championship program Eight race groups and 12 categories battle throughout the day for a unique third round of racing in the same weekend. For the quicker categories, it was about survival and hoping to end the weekend on a high note. For the classes on the harder Evinco tires, it was hoping tire strategy played out to end the weekend with success. In the end, Rolison Performance Group driver Bryson Morris won four of the six main events on the weekend in X30 Senior and KA100 Senior while Magik kart swept the victories with all three drivers earning a victory, today finding AJ Myers at the top of the podium. 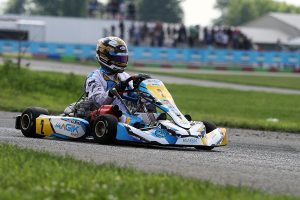 Over the opening two days, Bryson Morris (RPG / Kosmic) won in X30 Senior and KA100 Senior in separate days. Morris was near the front all weekend but found himself behind early in X30 Senior with a P6 in qualifying. That was quickly erased with a drive to the front in the Prefinal. Starting on pole, Morris along with teammate and four-time defending champion Ryan Norberg (RPG / Kosmic) and Luca Mars (SCR / Redspeed) were able to escape an opening corner incident involving a number of front runners. The trio pulled away with Morris at the point in the first half and Norberg taking over in the second. Norberg led them around for the final circuit with Morris never leaving his bumper. He waited until the drive out of I-70 to pull around and drag raced Norberg to the line. Mars slotted in behind Morris and helped to push him past for the victory, and Mars into second by nine thousandths of a second ahead of Norberg. Ashley Rogero (Nitro / Kosmic) beat Phil Arscott (KSNA / WPK) to the line for fourth.

The KA100 Senior fight was just that, a 16-round battle including at least the top-nine drivers at one point. Garrett Adams (Comet / Kosmic) was quickest in qualifying and won the Prefinal, but could not shake off the group that chased him. Arias Deukmedjian (KSNA / Kart Republic) led on the white flag lap but Morris used the draft out of I-70 to edge him out at the line for the victory by 47 thousandths. Luca Mars (SCR / Redspeed) was right there in third, but was penalized five seconds for pushback bumper. Because of the large lead group, it dropped him to 14th in the final order. That moved Connor Ferris (TFR / Kart Republic) up to third for his first SKUSA Pro Tour podium in the category. Adams ended up fourth with Nate Cicero (RPG / Kosmic) in fifth. 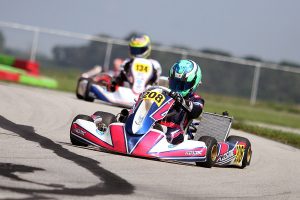 Sunday in Pro Shifter belonged to AJ Myers (Magik). The 2018 champion controlled the field all day, earning a sweep on the action. After setting fast time in qualifying, Myers led all 10 laps in the Prefinal and 16 laps of the Final for his first victory since the 2019 WinterNationals. Saturday winner and Magik teammate Rory van der Steur was a solid second with Danny Formal (ANSA / Charles Leclerc) able to finish on the podium in third. Kyle Wick (Tony Kart) and Race Liberante (Race Factory) ran uncontested to round out the top-five with Jake French (PSL / Birel ART) and Billy Musgrave (Factory Kart) having mechanical issues early.

Pro Shifter 2 welcomed its third different winner on the weekend as Josh Pierson (RPG / Kosmic) completed his shifterkart debut with a victory. The rookie showed speed all weekend and took advantage of contact between top qualifier Baylor Griffin (Orsolon / CRG) and Vicente Salas (Factory Kart) to win the Prefinal. Pierson kept up with the Pro 1 drivers in the Final, driving away to a four-second advantage. Griffin bounced back in the Final to drive back up to second with Anthony Freese (PSL / Birel ART) in third. Gavin Bayliff (PSL / Birel ART) and Annie Rhule (Magik) rounded out the top-five.

Joe Ruch and Nathan Stewart completed their own sweeps on the day in G1 and G2. Ruch (Race Factory) outran Scott Barnes (HMG / Intrepid) and Anthony Stiffler (HMG / CompKart). Stewart (PSL / Birel ART) completed the hattrick on the weekend as the only driver to win all three main events on the weekend in his respective category. Justin Peck (RPG / Kosmic) and Ken Schilling (Aluminos) completed the podium. 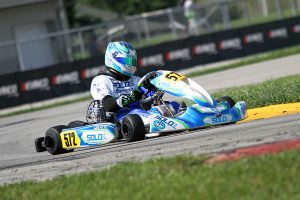 Attrition helped to decide the winners and podium finishers in the X30 Master and KA100 Master divisions. Adam Pettit (Solo Kart) had control of the top spot all day long, but was challenged early in the main event by two-time winner Scott Roberts (SCR / Redspeed). Roberts lost a chain six laps in the race, and had to watch from the sidelines. Pettit drove away to the victory with Salvatore Sparacio giving them a 1-2 Solo Kart finish. John Crow (KSNA / WPK) completed the podium. The fight in KA went down to the wire, with only two drivers as two-time winner Nick Tucker (Nitro / Tony Kart) retired after six laps with a flat right front tire. That left Ron Jenkins (Nash / EOS) and Jonathan Silva (RPM / CompKart) to fight for the victory. It went down to the penultimate corner as the two fought for the same piece of track and made contact. Jenkins went off and Silva was able to continue, reaching the checkered flag first for the victory.

Patience and tire strategy played out in the X30 Junior division to give Jace Park his first victory in the category. Park (SCR / Redspeed) was ninth after qualifying with Thomas Annunziata (TFR / Kart Republic) at the top of the order and was leading in the Prefinal when a red flag came out for a flip with seven laps completed. The race was called and put Annunziata and Carson Morgan (Tony Kart) on the front row with Park sitting there in third. Park jumped out to the lead on the opening circuit of the 16-lap Final and never looked back. Continued fighting behind him and never putting a wheel wrong allowed for a five-second advantage at the checkered flag. The fight for second went down to the wire with Mateo Rubio-Luengo (Supertune / Tony Kart) earning the spot over a spinning Paul Bocuse (SCR / Redspeed) as the reached the line. Annunziata finished fourth with Alex Stanfield (Crosslink / Exprit) in fifth. 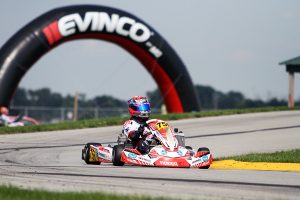 Two drivers were able to get away from the field in KA100 Junior to decide the winner for Round Three. Prefinal winner John Burke (Supertune / Tony Kart) and Carson Morgan (Tony Kart) locked up to drive away from the field. Burke led a majority of the race and in the final few laps, was able to gap Morgan to run unchallenged to the checkered flag. Morgan settled for second with Brent Crews (KSNA / WPK) joining them on the podium in third. Mateo Rubio-Luengo (Tony Kart) was fourth with top qualifier Aiden Levy (Tony Kart) in fifth.

Three different winners in three different rounds for the Mini Swift as Max Garcia (KSNA / WPK) was able to come away with the victory on Sunday. Round One winner Parker Delong (Nitro Kart) showed the confidence to be the driver to beat all day with fast time in qualifying and winning the Prefinal. DeLong put himself into the lead on the final circuit and held it going into the I-70 corner. With the top-five all right there, the other four locked up a pushed past DeLong in the run to the checkered flag. Leading the way was Garcia, who got to the line first ahead of Matias Orjuela (PPM / Parolin) by 65 thousandths of a second. Round Two winner John Antonino (Race Factory) record his third podium of the weekend in third, getting pushed by Caleb Gafrarar (PSL / Birel ART) to drop DeLong to fifth at the line. 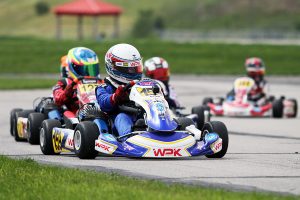 The Micro Swift category also saw three different winners on the weekend. Defending series champion Jack Iliffe (IRM / Tony Kart) was able to secure the top spot in one of the closest finishes of the weekend. Iliffe won the Prefinal and led the majority of the Final with Round Two winner Vivek Kanthan (MDR / Kosmic) and Carson Weinberg (Nitro Kart) right there. It ended with a drag race to the line, and Iliffe holding off Kanthan by two thousandths of a second with Weinberg back by 43 thousandths in third. Round One winner Asher Ochstein (Benik) was fourth while Caleb Tarter (Nitro Kart) completed the top-five.

Team and competitors now have two days to recharge as the three final rounds of the SKUSA Pro Tour are set to be contested on August 14-16 at New Castle Motorsports Park. The dynamics will change for these three rounds as the layout will be the ‘Reverse National’ course, a circuit SKUSA or any major organizations to visit the facility compete on. With the forecast calling for rain all week, including the weekend days, weather may play a big role in who is able to complete the double-header events and be crowned a 2020 SKUSA Pro Tour champion.