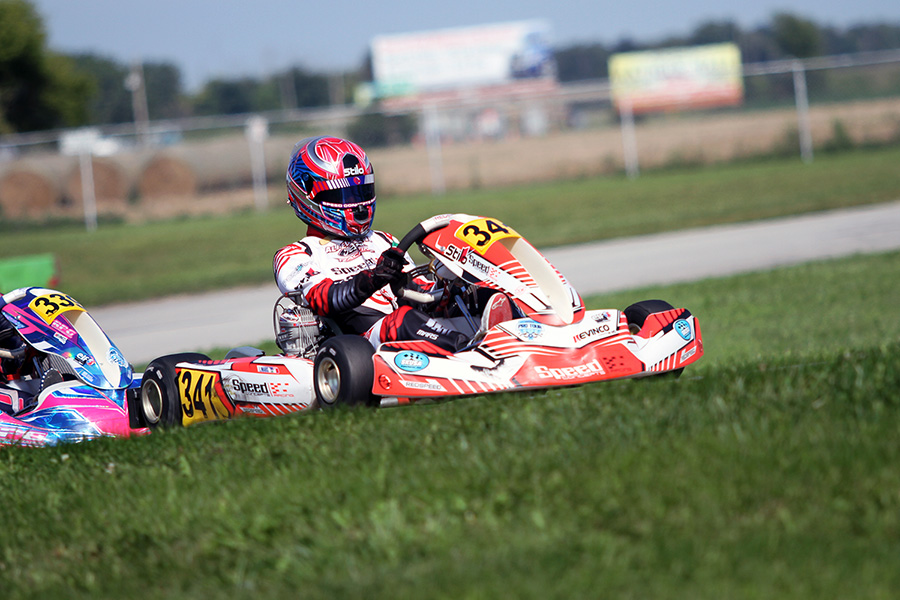 The opening weekend of the 2020 Superkarts! USA Pro Tour is at the halfway point with the completion of Saturday’s Round Two action at the New Castle Motorsports Park. Perfect weather conditions greeted the competitors at the New Castle, Indiana facility and the eight race groups including 12 categories. 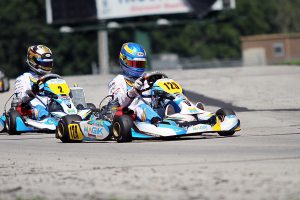 The X30 Senior field put on another great show in what looked to be the first time a female driver won on the SKUSA Pro Tour. Ashley Rogero (Nitro / Kosmic) and Hannah Greenemeier (RPG / Kosmic) fought at the front of the Prefinal with Rogero making a slight mistake on the final circuit and Greenemeier earning the win. Issues on the opening circuit of the main event dropped Hannah back in the pack, allowing Will Power Kart drivers Braden Eves, Arias Deukmedjian and Phillip Arscott to control the top spot. Senior rookies Bryson Morris (RPG / Kosmic) and Luca Mars (SCR / Redspeed) joined the fight at the front in addition to four-time champion Ryan Norberg (RPG / Kosmic). Mars came away with the top spot at the end, leading on the final circuit. Eves put himself into second to pressure Mars. Heading into I-70 corner, Mars ran defensive and Eves took the high line. He held it all the way around the entire turn to beat Mars to the exit point. Eves held on at the checkered flag for the provisional victory. A pushback bumper penalty took the win away, dropping him to sixth. That promoted Mars to the top of the podium for his first victory. Deukmedjian was classified second with Norberg in third. Morris was fourth with Canadian Thomas Nepveu (PSL / Birel ART) classified fifth after Brandon Jarsocrak (MDR / Kosmic) suffered a pushback bumper penalty, dropping him to ninth. 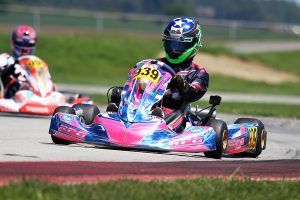 Bryson Morris prevailed in KA100 Senior for his first triumph in the category, second win on the weekend (Photo: EKN)

Bryson Morris (RPG / Kosmic) won X30 on Friday and came up just short in KA100 Senior. Saturday, Morris came out on top for his first victory in the category. Starting fourth, Morris jumped to the front early and led the majority of the race, holding on at the end for the victory. Matthew Mockabee (MDR / Kosmic) crossed the line second, up from 12th, but was given a 5-second penalty for a pushback bumper. That promoted Nathaniel Cicero (RPG / Kosmic) to second and Luca Mars (SCR / Redspeed) to third. Prefinal winner Garrett Adams (Comet / Kosmic) ended up fourth with Saturday winner Brandon Lemke (Franklin / Merlin) in fifth.

Magik kart earned a second victory on the weekend, this time at the hands of Rory van der Steur. 2016 champion Danny Formal (ANSA / Charles Leclerc) jumped out to the lead in the main event. 2018 title winner AJ Myers (Magik) moved up to second and challenge Formal for the top spot. The two made contact on lap 12, shuffling up the lead group. Top qualifier and Prefinal winner van der Steur took over the point and was able to lead the remainder of the 16-lap race for his first SKUSA Pro Tour victory. Saturday winner Andrew Bujdoso (Magik) ended up second with 2017 champion Jake French (PSL / Birel ART) in third. Formal ended up fourth with defending champ Kyle Wick (RPG / Tony Kart) fifth. 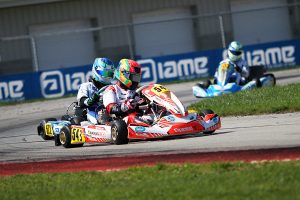 Scott Roberts held off the pressure for a second straight in X30 Master (Photo: EKN)

Baylor Griffin (Orsolon / CRG) earned his first SKUSA Pro Tour win in the Pro Shifter 2 division. Griffin jumped out to the lead in the Final, and held off Vicente Salas (Factory Kart) for the victory. Josh Pierson (RGP / Kosmic) was able to work past Friday winner Jordon Musser (PSL / Birel ART) for the third step of the podium. Joe Ruch (Race Factory) bounced back from a DQ for weight on Friday to dominate the G1 class Saturday. Ruch drove away to a 20-second advantage with Friday winner Scott Barnes (HMG / Intrepid) fighting back from early troubles to end up second. Anthony Stiffler (HMG / CompKart) completed the podium. Nathan Stewart (PSL / Birel ART) kept his score perfect in G2, leading all day over Justin Peck (RPG / Tony Kart) and Ken Schilling (Aluminos).

The victory in X30 Master went down to the wire. After a wild Prefinal, Friday winner Scott Roberts (SCR / Redspeed) established himself as the leader with Adam Pettit (Solo Kart) as the top challenger. The two drag raced to the line after 16 laps, separated by 23 thousandths with Roberts earning his second victory. Salvatore Sparacio (Solo Kart) was unable to challenge on the last lap, finishing third with John Crow (KSNA / WPK) a close fourth and Kim Carapellatti (CompKart) fifth. Nick Tucker (Nitro / Tony Kart) ran away with the main event victory in KA100 Master. The gap was eight seconds over Prefinal winner Jonathan Silva (CompKart) with Ron Jenkins (Nash / EOS) third. 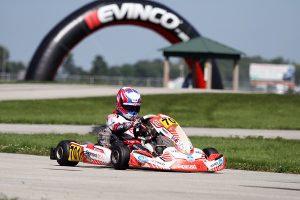 A great performance by Paul Bocuse to earn his first victory in X30 Junior (Photo: EKN)

X30 Junior ended up becoming a two-driver show with Paul Bocuse (SCR / Redspeed) escaping the field early. Carson Morgan (Tony Kart) eventually ran him down when he left the wild excitement that became the fight for third. The two diced it out on the final circuit, with Bocuse able to edge Morgan out at the line by 87 thousandths. Jack Jeffers (SCR / Redspeed) won the battle for third to earn his first SKUSA podium. Prefinal winner Alex Stanfield (Crosslink / Exprit) was fourth with John Burke (Supertune / Tony Kart) in fifth.

KA100 Junior was a three-wide finish at the line. Friday’s top two of John Burke (Supertune / Tony Kart) and Carson Morgan (Tony Kart) were joined by Westin Workman. Burke, who won the Prefinal, led the opening 13 laps. On the final circuit, the trio swapped positions and the race to the line was a three wide drag race. Morgan was third and slipped to the outside of both to reach the line first, as the two-time SKUSA Pro Tour Cadet champion earned his first victory in KA100 Junior. Workman ended up second with Burke in third. Noah Baker (Supertune / Tony Kart) and Logan Adams (Comet / Kosmic) completed the top-five. 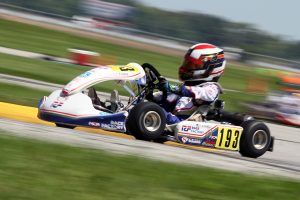 The Mini Swift category saw at least seven different drivers in the lead pack, all putting on a great show of race craft. The better of them all was John Antonino in the Race Factory machine. Antonino started fourth and was shuffled back early. He would fight his way forward with no help of anyone, eventually reaching the point with three laps to go. Antonino never put a wheel wrong and drove to his first SKUSA Pro Tour victory. Friday winner Parker DeLong (Nitro Kart) was second with Max Garcia (KSNA / WPK) earning another podium in third. Cameron Brinkman (Franklin / Merlin) and Matias Orjuela (Parolin) rounded out the top-five.

Micro Swift welcomed another first time winner in Vivek Kanthan (MDR / Kosmic). A five-driver fight for the victory took place in the Final with defending champion Jack Iliffe (IRM / Tony Kart), Cameron Weinberg (Nitro Kart) and Kanthan the top contender. All three led at one point with Weinberg leading at the white flag. Kanthan was third and followed Iliffe by Weinberg and then was able to get a great run out of I-70 to nip the Prefinal winner at the line by 13 thousandths of a second. Weinberg was a close third, finishing with 66 thousandths. Top qualifier Sarah Bradley (Nitro Kart) was fourth with Caleb Tarter putting three Nitro Kart drivers in the top-five.

Two rounds are in the books at the New Castle Motorsports Park for the SKUSA Pro Tour Summer Festival, with a unique third round on the same weekend schedule for Sunday. The day will be about tire strategy for those utilizing the harder Evinco tires while the other categories look to manage their equipment in hopes of ending the weekend on top of the podium at the halfway mark of the event.