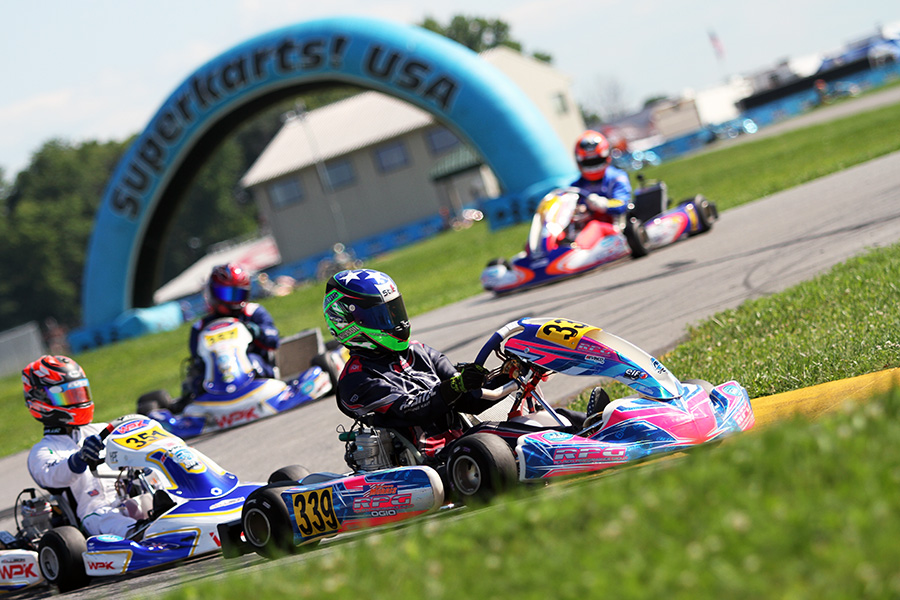 The Superkarts! USA waited roughly five months before the 2020 season could officially begin. The COVID-19 pandemic struck as the WinterNationals were set to begin in New Orleans, cancelling the event the day it began. The unusual situation has put the all-in format for the championship with all six rounds to be contested at the New Castle Motorsports Park in 10 days. Friday was the opening round on the ‘Super Mile’ course at the New Castle, Indiana facility. Qualifying, Prefinal and Final conducted for the eight race groups and 12 categories on Friday, setting the stage for the championship chase ahead. 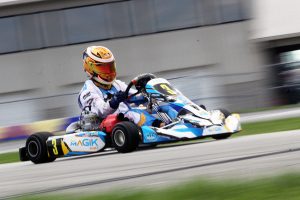 X30 Senior closed out the opening day as the last class in the order featuring 43 drivers. Senior rookie Bryson Morris (RPG / Kosmic) came into the weekend looking to defend his home track and did so. Morris laid down a monster lap in qualifying as the lone driver in the 1:15’s, clearing the field by over half a second. The Prefinal however belonged to Braden Eves, making his debut aboard the KartSport North America / Will Power Kart. Eves edged out Morris for the win, setting up the front row for the 16-lap main event. Morris and Eves led the lead group that included a number of veterans – Phil Arscott (KSNA / WPK), Brandon Jarsocrak (MDR / Kosmic) and four-time defending champion Ryan Norberg (RPG / Kosmic). The group broke away from the rest of the field with the victory decided on the final circuit. Morris and Eves exchanged the top spot a few times, including the final circuit with Morris taking over the point at the green corner. Eves attempted the over-under at I-70, but pressure from the rest of the lead group halted his attempt. At the line, Morris took the victory, his first in X30 Senior. Eves settled for second with Arscott third. Norberg slipped past Jarsocrak at the line for fourth.

Pro Shifter had drama throughout the day, and to the final circuit. Defending champion Kyle Wick (RPG / Tony Kart) set fast time in qualifying before Magik pair of AJ Myers and Andrew Bujdoso worked past in the Prefinal. Myers led the opening 10 laps of the Final before a broken chain put him on the sidelines. That put Bujdoso to the point with pressure from Wick and 2016 champ Danny Formal (ANSA / Charles Leclerc). On the final circuit, Wick dove to the inside of Bujdoso at turn three. The two made contact on the exit, with Formal trying to slip past both. More contact continued down the straight, spinning Wick completely around and Formal into the wall. Bujdoso escaped and drove to the checkered flag for the victory. Race Liberante (Race Factory) crossed the line in second but was removed for being too wide in tech. That promoted 2017 title winner Jake French (PSL / Birel ART) to second and Brickyard winner Devon Smith-Harden (HMG / CompKart) third. Billy Musgrave (Factory Kart) and Kyle Kennedy (HMG / CompKart) completed the top-five. 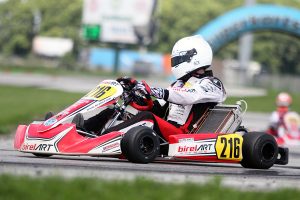 Four-time SKUSA Pro Tour champion Jordon Musser (PSL / Birel ART) opened up his return to the Pro Shifter 2 class with a victory. Musser set fast time in qualifying but was shuffled back at the start of the Prefinal with contact, allowing rookie Josh Pierson (RPG / Kosmic) to drive to the race win. Pierson made it three laps before his engine expired. Musser took over as the class leader but was pressured late by a charging Vicante Salas (Factory Kart). Salas ran quickest lap overall in the Final, coming up just short at the line for the victory. Baylor Griffin (Orsolon / CRG) completed the podium with Gavin Bayliff (PSL / Birel ART) fourth and Anthony Freese (PSL / Birel ART) fifth.

Joe Ruch (Race Factory), who missed Thursday practice, was the quickest driver in G1 all day. A cut tire in the Prefinal kept him from the race win, but bounced back to show the way in the Final. Ruch came across the scales underweight, thus handing the victory to Scott Barnes (HMG / Intrepid). Anthony Stiffler (HMG / CompKart) and Amr Sinada (Magik) joined him on the podium. Nathan Stewart (PSL / Birel ART) swept the G2 division over Justin Peck (RPG / Kosmic) and Ken Schilling (Aluminos). 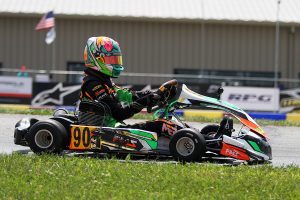 Thirty-four drivers filled up the KA100 Senior field for Round One. The day looked to belong to Matthew Mockabee (MDR / Kosmic), who set fast time in qualifying and won the Prefinal. That was until Brandon Lemke (Franklin / Merlin) charged forward. Starting eighth, Lemke was up to the by lap seven and held the point until the checkered flag for the victory. Behind him, the show was Garrett Adams (Comet / Tony Kart). Adams was second in the Prefinal but removed for a spark plug issue in tech. In 16 laps, Adams knifed his way forward to third, up 31 positions with fast laps of the race. Bryson Morris (RPG / Kosmic) finished second, but was penalized five seconds for contact, moving him to fifth in the results. That promoted Adams to second, Mockabee to third with Connor Ferris (TFR / Kart Republic) fourth.

The X30 Junior race was decided after the checkered flag. It was a great race to the checkered flag with Jace Park (SCR / Redspeed) edging out the field for the provisional victory. Officials laid down a three-second penalty for blocking, moving him down to sixth in the order. That promoted the chase for second to the top of the podium with Brent Crews (KSNA / WPK) earning the position. Prefinal winner Max Opalski (RPM / Tony Kart) led portions of the race and ended up second. Alessandro De Tullio (Parolin) finished third, up nine spots from 12th. Top qualifier Alex Stanfield (Crosslink / Exprit) was fourth with Paul Bocuse (SCR / Redspeed) in fifth. 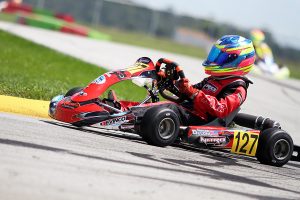 Parker Delong edge out the competition in Mini Swift for the victory in Round One (Photo: EKN)

Parker DeLong opened up the championship chase with victory in Mini Swift. DeLong set fast time in qualifying but finished fourth in the Prefinal as Max Garcia (KSNA / WPK) took the win. Four drivers were able to break away late in the Final with Caleb Gafrarar (PSL / Birel ART) leading early. Garcia took over with DeLong taking the position with two laps remaining. DeLong held off Garcia at the line for the victory by two hundredths of a second. John Antonino (Race Factory) earned his first SKUSA Pro Tour podium in third with Gafrarar in fourth. Cooper Shipman (IRM / Tony Kart) completed the top-five.

The Micro Swift class welcomed a first-time winner in Asher Ochstein (Benik). The main event was a three driver battle between him, defending champion Jack Iliffe (Tony Kart) and Vivek Kanthan (Kosmic). Ochstein led 13 of the 14 laps, holding a late charge by Iliffe at the line by 62 thousandths for the victory. Kanthan earned his first podium with a third place finish. Caleb Tarter (Nitro Kart) and Sarah Bradley (Nitro Kart) finished fourth and fifth.

Round Two of the SKUSA Pro Tour Summer Festival will be contested on Saturday at the New Castle Motorsports Park. Weather is expected to be perfect, rising up to the possible 80s.