Antonelli and Taponen Become the First Winners of the Season 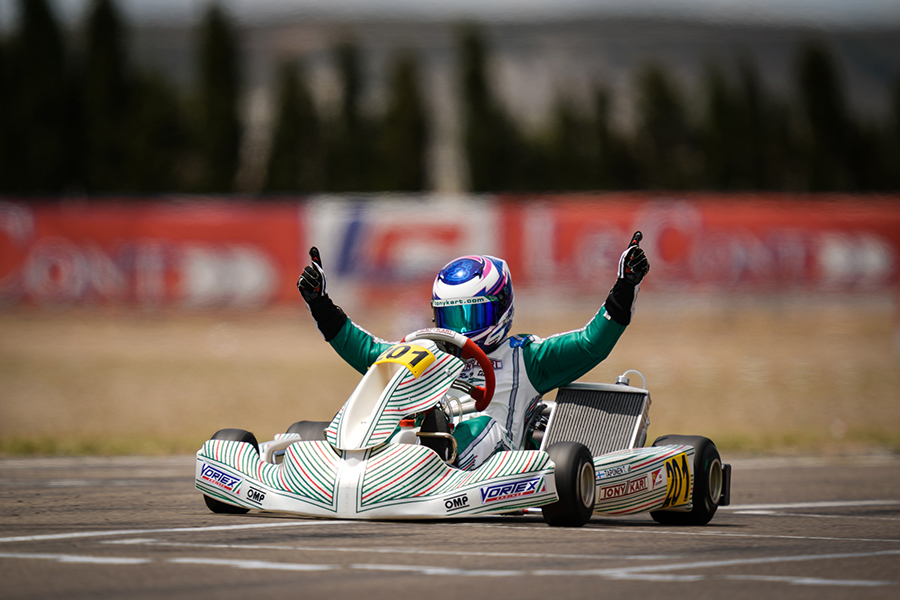 The first Competition of the FIA Karting European Championship – OK & Junior was an exciting race under the sun and heat of northern Spain. The fast Zuera circuit was a major contributor to the intensity of the spectacle thanks to its overtaking-friendly layout. Tuukka Taponen (FIN) in Junior and Kimi Antonelli (ITA) in OK only started 9th and 4th respectively in the Final, but they were able to step up the pace to cross the finish line as winners.

“This Competition took place in a particular infection-control context, but we succeeded to manage the situation so that the 2020 FIA Karting European Championship could start in the optimum conditions,” rejoiced promoter James Geidel. “I would like to thank Drivers, Teams, Officials and Organisers for their cooperation and respect of the rules put in place. The standard of the Competition was incredibly high and I think it promises to be a very interesting 2020 season, even though the current circumstances are difficult for everyone.”

Antonelli wins his duel with Barnard in OK.

Unbeaten during the Qualifying Practice and throughout his four Qualifying Heats, Taylor Barnard (GBR – KR/IAME) was hoping to continue his dominance in the Final. But from the very first lap, the Driver in the colours of the Rosberg Racing Academy Team was surprised by the young and determined Nikita Bedrin (RUS – Tony Kart/Vortex). The overtaking was then to continue with great intensity, finally to the advantage of Kimi Antonelli (ITA – KR/IAME), who managed to pass Barnard then Bedrin in the space of two laps. “Even though I didn’t win as many Qualifying Heats as my rivals, I wasn’t worried about my chances of winning,” said one of the most promising Drivers of his generation. “My technical team and I worked hard to be fast throughout the Final and it worked out as we wanted it to. I also set the fastest lap in the race, which confirmed our level of performance.” Once past Bedrin, Barnard continued to attack until the end, without being able to reduce the small gap of four tenths taken by his rival.

The duel for 4th place was the subject of an intense battle between several Drivers, who finished wheel to wheel under the chequered flag. Joe Turney (GBR – Tony Kart/Vortex/LeCont) completed his eight-place progression in this position, ahead of Laurens Van Hoepen (NLD / Birel Art/TM Racing/LeCont) and his British team-mate Oliver Gray. European Champion in the category in 2018, Hannes Janker (DEU – KR/IAME/LeCont) returned to his highest level. He started on the front row but fell back during the Final to finish 7th ahead of Enzo Trulli (ITA – KR/IAME). The Spanish Driver Maya Weug (Birel Art/TM Racing/LeCont) had her best performance at this level and finished 9th, with the best comeback of the Final (+24 places) going to Rafael Chaves Camara (BRA – Exprit/TM Racing/LeCont).

In Spain, Tuukka Taponen (FIN – Tony Kart/Vortex/LeCont) started his European Championship as he started the previous one in 2019: with a victory! The young Finn won with panache, as he started only 9th on the grid for the Final, after a slight disappointment in his first heat on Saturday morning. “I managed to gain two places on the first lap,” commented Tuukka, “Then the fight was relentless in the pack. I was confident because we never stopped improving the equipment over the weekend. I was getting quicker and quicker as the laps went by and that allowed me to gain places regularly to get to the front under the chequered flag. I hope to confirm this at the next Competition in Sarno.”

The suspense for the podium remained intact right up to the end. Ugo Ugochukwu (USA – KR/IAME/LeCont) never gave up and was rewarded for his efforts with a 2nd place on the starting grid. With two laps to go, the American took the lead over Brando Badoer (ITA – KR/IAME/LeCont). “Victory was not far away, but it is still satisfying to be on the podium of an FIA Karting European Championship for the first time,” said the Italian, son of the former Formula 1 driver.

Arvid Lindblad (GBR – KR/IAME/LeCont), the leader at the end of the Heats, was not able to maintain his position and had to settle for 5th place behind his team-mate Alex Powell (JAM – KR/IAME/LeCont), who has been making a great comeback since the Free Practice sessions. Ranked 6th just ahead of Tymoteusz Kucharczyk (POL – RK/TM Racing/LeCont), Valerio Rinicella (ITA – Parolin/TM Racing/LeCont) will remain the revelation of the Spanish Competition. At home, Bruno Del Pino (ESP – Tony Kart/Vortex/LeCont) was hoping to keep his place in the top ten, before having to settle for 13th place.

The complete results of the Zuera Competition can be found on the official FIA Karting Championship app for iOS and Android mobile devices and on the website www.fiakarting.com