With the entire karting season postponed until mid-summer due to COVID lockdowns, the Comet Racing Engines team was excited for the first national event since February! With a great crowd on hand for the USPKS season opener at New Castle Motorsports Park it was the perfect showcase for our drivers and teams to compete against some of the best karters in the sport. With 4 wins, 4 poles and over a dozen drivers on the podium, it was an extraordinarily successful weekend for a number of Comet Racing Engines drivers. 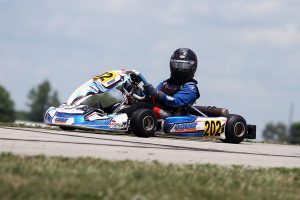 KA100 Junior was a strong class for Comet Racing Engines all weekend. On Saturday Logan Adams picked up the Pre-Final win. In the Final it was all Mateo Rubio Luengo crossing the line with a 3 second final victory as Logan Adams ran second. Unfortunately, Luengo would incur a front bumper penalty which put him back to fifth. Adams was promoted to the win with John Burke earning the hard charger award up 13 spots to fourth and Christian Miles seventh.

Sunday Mateo would get his revenge taking another final victory in KA100 Junior without a bumper penalty. Christian Miles was on the podium in third with Logan Adams in seventh after winning the Prefinal.

The other KA class, Senior, was another strong showing for Comet Racing Engines with Bryson Morris winning the Final on Sunday! Matt Mockabee was fourth and Garrett Adams in seventh after earning fast time in qualifying earlier in the day. On Saturday, Garrett was once again the recipient of the pole with Bryson Morris second in qualifying, making it an all-Comet front row for the Prefinal! Adams and Morris would finish the Saturday prefinal like they qualified, finishing 1-2. In the final Morris was fourth across the line with Matt Mockabee in seventh and Garrett Adams eighth. 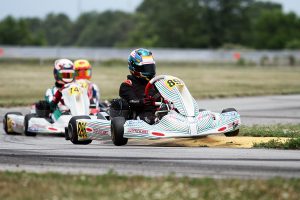 Redemption for Mateo Rubio Luengo and a sweep for Comet Racing Engines as the KA100 Junior winner on Sunday (Photo: EKN)

Matias Orjuela started out Saturday on a solid note with the pole in Mini Swift and a runner-up in the Prefinal. In the Final Matias would mix it up with the top 4 for the top spot on the last lap and taking the win! Christian Quijano started the day off well with a fourth in qualifying and Cameron Myers had a strong prefinal with a fifth. Unfortunately, both drivers had contact on the first lap of the Saturday Final ending both of their days early. Aryton Grim in his first season of Mini Swift had a 10th on Saturday, Kai Johnson was up 14 spots from the start to finish 17th, Levi Copass was 20th and Corbin Collins 26th.

On Sunday Matias put on a show, starting on the front row for the final, contact early in the race put him back to 13th and some 6 seconds back from the leaders. Matias would make up the deficit setting fast lap after fast lap to catch the leaders on the last lap. A couple great passes put Matias in contention for the win ending up runner-up and with fastest race lap. Aryton Grim improved on his Saturday result with a seventh place in the Final, Christian Quijano was 12th after passing 19 karts and Cameron Myers was running 8th before he had to go off track to miss a spinning kart, putting him back to 19th. Corbin Collins was 24th with Levi Copass in 25th. 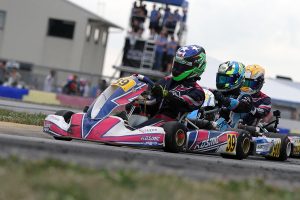 On Saturday in Micro Swift, Asher Ochstein crossed the line in the final to finish 4th with Isaac Malcuit 5th, Jase Petty 8th and Caleb Tarter was 9th. Kolin Keifer was up 4 spots to finish 11th with Alessandro Truchot 16th. Sunday saw two Comet Racing Engines drivers on the podium in the final with Caleb Tarter in 2nd joined by Jase Petty in 3rd while Asher Ochstein put three Comet Racing Engines drivers into the top 4.

Defending X30 Masters champion David Galownia was 5th on Saturday in the Final but after some overnight changes he was flying on Sunday starting the day with a Pole then taking the Prefinal victory by 4 seconds. Things were lining up well for David in the Final pulling out a 10-kart gap to second early in the race only to have the heavens open up and the race halted for the switch to rain tires. David was still fast in the rain but would have to settle for second after looking strong enough in the dry to sweep the day in X30 Masters. 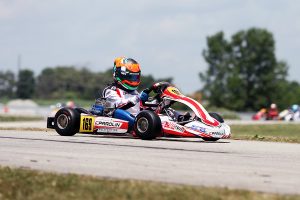 Matias Orjuela put Comet Racing Engines on the top of the podium in Mini Swift on Saturday (Photo: EKN)

After a great weekend with top finishes multiple classes, Mark Dismore Jr. with Comet Racing Engines commented, “It’s exciting to see our engine program do well in all of the engine categories. We took the time during the shutdown to work on engine R&D and explore some things we really wanted to focus on. Its great to see it pay off on track with multiple wins and several our drivers up front in all the classes. I’m proud of all of our drivers and teams we work with and everyone is working hard together, which is what it takes.”

The USPKS opener starts a busy 5 weeks for the team with Battle at the Brickyard on July 30-August 2 and back-to-back Superkarts! USA Pro Tour events at New Castle Motorsports Park. Comet Racing Engines will also be attending the final two rounds of the 2020 USPKS season at Road America on September 3-6 and GoPro Motorplex on October 15-18.