Back to Back Weekends for Leading Edge Motorsports 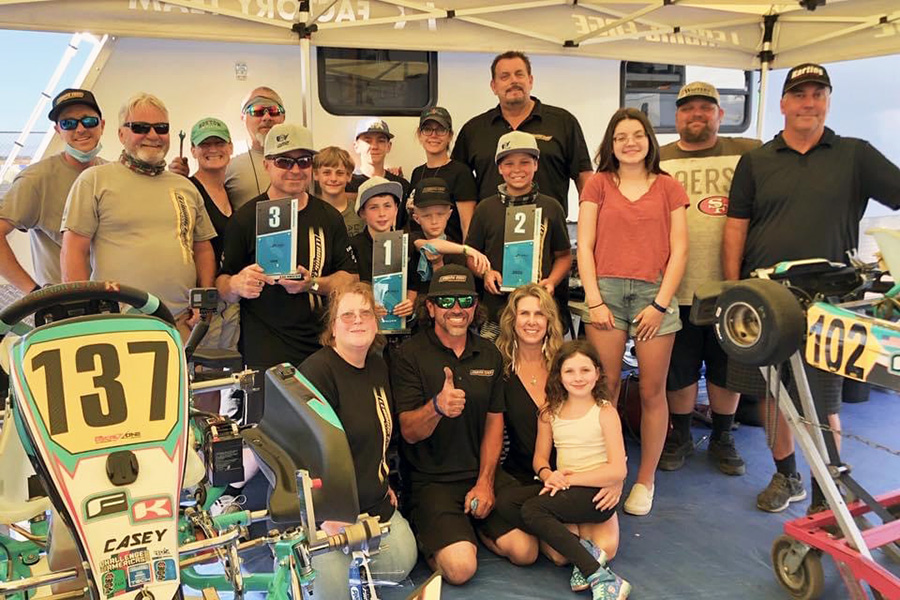 The racing schedule is full for the Leading Edge Motorsports operation this summer, coming off two weekends of competing at two different programs. Greg Bell’s LEM operation visited the Santa Maria Karting Association facility on July 10-12 for the Superkarts! USA California ProKart Challenge. The following weekend on July 17-19, the team traveled to Sonoma Raceway for the second event of the California ROK Championship program, running in conjunction with the ROK Sonoma program. Victory and podium finishes highlight the back to back weekends.

Cypress Andruss was able to secure a third straight victory in the Micro Swift category on Saturday. Andruss swept the action, capped off by an eight-second margin of victory in the Final. Sunday was a tough round as issues kept Cypress from recording a lap in qualifying. Andruss suffered a bent kart and axle. The entire team worked together to get the kart ready for the Prefinal where he stated from last. Cypress worked his way up to the fourth position in 12 laps with the quickest lap of the Prefinal, however, was removed for a clutch slip issue in tech. Starting last in the Final, Andruss was making great moves through the opening lap until contact on lap two put him on the sidelines early. It was an up and down weekend for fellow Micro driver Brody Budelli, placing eighth on Saturday and improving to sixth on Sunday.

Stephen Eisert was able to give Leading Edge Motorsports a runner-up finish in his KA100 Junior debut at the California ProKart Challenge. It was due to his hard charger performance in the main event. After a DNF in the Prefinal, Eisert drove his Praga up to the second position in the 24-lap race. Sunday was another advancement day after qualifying seventh, moving up to sixth in the Prefinal, and then one spot short of another podium finish in fourth for the Final.

Jeff Rice gave Leading Edge Motorsports its third podium result of the weekend, running top-four all weekend in X30 Master. After qualifying fourth, Rice drove up to second in the Prefinal but fell one step lower on the podium for the Final, ending up third. Sunday was a straight day of fourth place finishes to put himself in third position for the championship chase.

It was a challenging weekend for Casey Moyer in Mini Swift, recording a DNF both days in the Final, but made great strides in speed. Valiantino Gaberino also showed great speed throughout the weekend in Mini Swift, posting a weekend best fifth place in qualifying on Sunday. Contact in the Prefinal dropped him down the order but fought back to finish eighth.

“It was a fun weekend with the entire crew and families in Santa Maria,” stated LEM’s Greg Bell. “We all battled through some difficult situations but I was very proud how everyone jumped in to assist where needed. Andruss has put himself in the hunt for the title in Micro and we continue to improve each weekend with everyone under the tent.”

It was a quick turnaround at the Lodi, California shop to get prepared for the California ROK Championship / ROK Sonoma event at Sonoma Raceway on July 17-19. Four drivers took part in the combined event in Sonoma, California for a three day, one round weekend.

The event was a great rebound for Brody Budelli after the Santa Maria weekend. Budelli was in contention all weekend long in the Micro Swift category. Brody qualified first and won both heat races. The main event was a great battle for the top spot, with Budelli coming up just short at the line by 78 thousandths of a second. Overall, the weekend is providing great momentum for the rest of the summer.

Coming off his podium in Santa Maria, Stephen Eisert nearly earned another trip to the steps in Sonoma. Eisert was among the top contenders in the Junior 100cc category, battling for a podium position throughout the event. Eisert was fourth in qualifying and the opening heat race before dropping one spot in Heat #2. Stephen worked his way into the third spot in the Final briefly before he settled into the fourth spot at the checkered flag.

Mike Guasch and Chuck Hastings completed the LEM lineup in Sonoma, contesting the Shifter ROK Masters and 125cc Limited categories. Guasch was fifth after qualifying but issues in the heat races and main event resulted in DNFs. Hastings was up to fourth in Heat #1 before getting shuffled back in Heat #2 and unfortunately recording a DNF in the main event.

“Our young drivers continue to learn each and every weekend, on and off the track,” add Bell. “Each weekend they were put in different situations and learned from these experiences. Our shifter drivers had some bad luck and that happens, but we have to put it behind us and move forward as we have some tough competition coming in our next events on the calendar.”

The Leading Edge Motorsports race team is set to head east for another set of back to back weekends at the New Castle Motorsports Park. Superkarts! USA Pro Tour will host six rounds of racing over the August 6-9 and August 13-16 at the New Castle, Indiana facility. New Formula K and Praga chassis are currently being assembled in the shop and karts are being prepped for the event. Contact them by calling 866-585-5278 or visit leadingedgemotorsports.com, and be sure to follow them on Facebook.

For the last 25 years, Greg Bell and Leading Edge Motorsports have been at the forefront of the karting industry, supporting his local scene from his Lodi, California shop while also winning national races and championships with his traveling race and driver support team. In November of 2019, Leading Edge Motorsports won two of the biggest shifter kart races of the year at the ROK the Rio and SKUSA SuperNationals events in Las Vegas. As the official factory racing team for Formula K and Praga karts in the United States, Leading Edge Motorsports will compete in the Challenge of the Americas, KPX Championships and ROK Sonoma series in addition to assorted ROK Cup USA and Superkarts! USA events.