Good Finals in Sarno at the Opener of WSK Euro Series 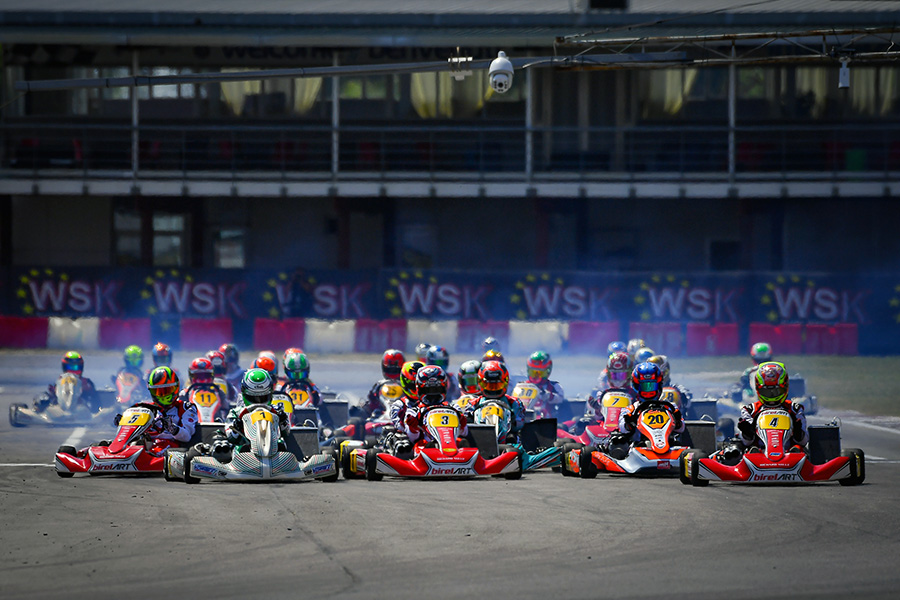 The weekend of the opener of WSK Euro Series in Sarno at the International Circuit Napoli ended with an excellent spectacle on track after the Covid emergency. Despite the hot weather, competitiveness has been very high in all the categories KZ2, OK, OK-Junior and MINI with around 180 drivers on track from 32 different countries including those that won the WSK Super Master Series one week ago in Adria.

After the exciting qualifying heats, Prefinals and Finals in Sarno rewarded the strongest drivers of this opening race of WSK Euro Series, that will reach its conclusion on September 20th at the South Garda Karting circuit in Lonato.

The MINI drivers kicked off Prefinals of the closing day in Sarno to define the starting grid of the finals. The Japanese Kean Nakamura Berta (Team Driver Racing Kart/KR-Iame-Vega) confirmed his speed winning Prefinal-A, while Prefinal-B was won by the young Spaniard Christian Cotoya Sanabria (CRG-TM Racing-Vega), who was fourth at the end of heats.

Prefinal-A of OKJ was won by the Czech Igor Cepil (KR Motorsport/KR-Iame-Vega), while his teammate Brando Badoer slipped down to P5 after leading the pack in the heats and leading also the race in the initial laps.  The Finn Tuuka Taponen (Tony Kart Racing Team/Tony Kart-Vortex-Vega) won Prefinal-B.

In KZ2, the victory of the Prefinal went to the Italian Riccardo Longhi (BirelArt Racing/BirelArt-TM Racing-Vega), who led the winner of Adria Simo Puhakka (Tony Kart racing Team/Tony Kart-Vortex-Vega) and the other BirelArt driver  Giuseppe Palomba. In OK, the Prefinal-A went to the Brit Oliver Gray (Leclerc by Lennox/BirelArt-TM Racing-LeCont), while the Finn Juho Michael Valtanen (Pantano Team/KR-Iame-LeCont) won Prefinal-B as the other protagonist, the Brit Joe Turney (Tony Kart Racing Team/Tony Kart-Vortex-LeCont), was forced to an early retirement due to a contact with Valtanen.

Riccardo Longhi (BirelArt Racing/BirelArt-TM Racing-Vega) won the KZ2 Final after doing the same in Prefinal. This was a nice win as the Italian led from lights to flag, when he crossed the finish line ahead of the French Adrien Renaudin (Sodikart/Sodikart-TM Racing-Vega), who installed himself in P2 in the initial laps. The other Italian of BirelArt, Giuseppe Palomba, rounded off the podium in P3. He was second at the start and then kept the third place all the way to the flag. The Finn Simo Puhakka (Tony Kart Racing Team/Tony Kart-Vortex-Vega) started from the front row, but lost several positions at the start and then recovered up to P4 ahead of the French Jeremy Iglesias (Formula K Racing Team/Fomula K-TM Racing-Vega) and the other BirelArt driver Alex Irlando.

SPINA RECOVERS TO THE WIN IN OKJ

The Italian Alfio Andrea Spina (KR Motorsport/KR-Iame-Vega) managed to install himself on top at the beginning of the Final, after several comeback heats and also a retirement due to a contact. Once on top, Spina led a strong race and crossed the finish line ahead of his teammate from Czech Republic Igor Cepil and the Finn Tuuka Taponen (Tony Kart Racing Team/Tony Kart-Vortex-Vega). Brando Badoer (KR Motorsport/KR-Iame-Vega) managed to recover several positions and secured P4 in the closing stages from the Brit Freddie Slater (Ricky Flynn Motorsport/Kosmic-Vortex-Vega).

The MINI Final lived on the duel between the Japanese Kean Nakamura Berta (Team Driver Racing Kart/KR-Iame-Vega) and the Russian Dmitry Matveev (Energy Corse/Energy-TM Racing-Vega), as the latter managed to take the lead early on, recovering several places over the weekend since he did not run qualifying practice. Nakamura managed to take the lead at the last lap though and won the race from Metveev. The third place went to the Pole Jan Przyrowsky (AV Racing/Parolin-TM Racing-Vega), who has held P2 for a long time. The French Guillaume Bouzar (Parolin Racing/Parolin-TM Racing-Vega) was among the front runners and closed the race in P4 leading the Dutch Thijs Keeren (Pantano Team/KR-Iame-Vega). The Spanish driver Christian Cotoya Sanabria (CRG-TM Racing-Vega) went off early on after starting from the front row.

The next round is due on September 14-20th at the South Garda Karting in Lonato. The second and third round of WSK Euro Series will award the titles in the four categories. The OK and OKJ races will be valid for the Italian Championship title.