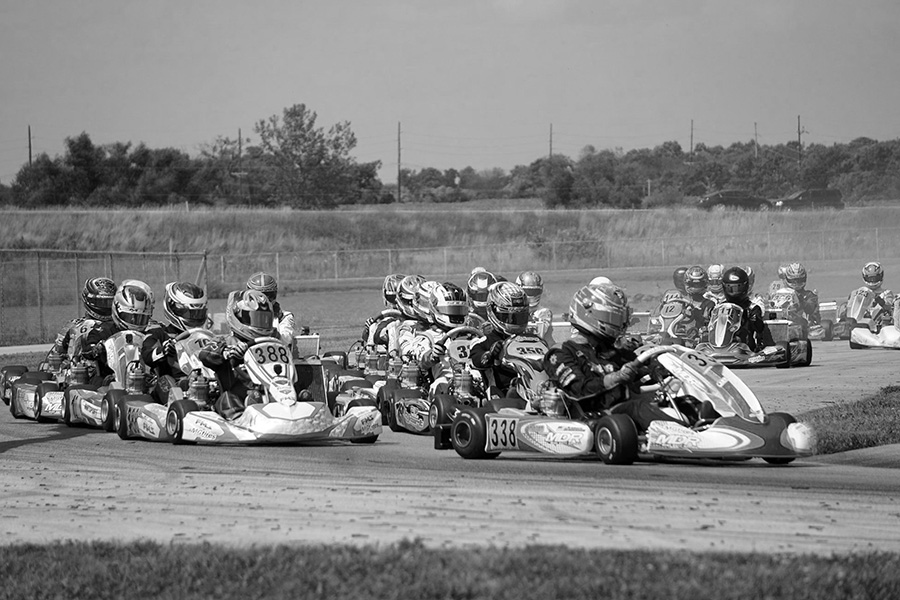 The eighth season for the United States Pro Kart Series presented by MG Tires and IAME USA East has been delayed by four months. The COVID-19 pandemic forced the cancellation for the opening event in Ocala, Florida and postponed the second event on the 2020 schedule in North Carolina. What was originally scheduled to be the season finale has become the 2020 opener with the Hoosier State Grand Prix at the New Castle Motorsports Park. The series is set to welcome a record turnout on July 17-19. The bar is set at 223 pre-entries scheduled to compete at the New Castle, Indiana facility in the seven IAME categories, eclipsing the previous record high of 181 at last year’s finale.

An unofficial practice is scheduled for Thursday, July 16 around the 1-mile ‘national’ layout. The event official begins on-track Friday with five rounds of practice to set the stage for two separate rounds of racing on Saturday and Sunday. Each round features a warm-up, qualifying, a Prefinal and Final. USPKS just announced a $15,000 cash purse for the X30 Pro and X30 Junior categories, along with a slew of free MG Tires for podium finishes and series championship contenders. The USPKS Winner’s Circle program package for series champions returns in addition to tickets to the 2021 edition of the IAME International Final.

eKartingNews.com is back for the eighth year with United States Pro Kart Series to provide industry-leading coverage from each of the three events for the 2020 season. Those karting enthusiasts not in attendance can listen from home or on the road to the EKN Live broadcast page at www.ekartingnews.com/live with Tim Koyen providing the play-by-play call. This weekend’s broadcast partners are A-Maxx Racing, Alan Rudolph Racing Academy and Kart Republic. Daily reports and updates on the EKN Social Media network will fill up your timeline throughout the weekend.

We begin our 2020 United States Pro Kart Series coverage with a two-part preview of the weekend, including entry lists of all seven categories. Yesterday, we previewed the Junior and Cadet categories that will compete around the New Castle Motorsports Park facility for the Hoosier State Grand Prix. Today, we review the Senior and Master divisions. 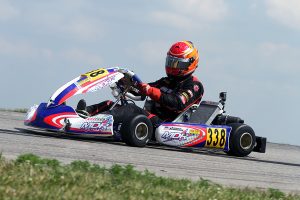 What is the definition of a stacked field? How about a three-time defending series champion, two former series champs, the current EKN TaG Driver Rankings #1 driver, multiple former national champions, nearly all the top contenders from last year’s title chase and a number of drivers looking to make their mark that fill up the 44-driver roster.

The Champion: The 2020 season will be the third time Brandon Jarsocrak enters the year as the defending champion. Jarsocrak won 2017 and 2018 with KartSport North America and after a rough start in 2019, moved over to Mike Doty Racing where he finished the season strong. A rare DNF in the sixth and final main event nearly cost him the championship, holding onto his third straight title by only eight points. Back with MDR aboard a Kosmic, Jarsocrak is still the driver to beat at the USPKS going for a fourth straight crown.

Former Champs: Brandon Lemke and Alex Bertagnoli know what it takes to win at USPKS and earn a championship. Lemke was the last driver since Jarsocrak to win a title in 2016 and finished the 2019 campaign rejoining the Franklin Motorsports / Merlin camp to win the series finale at New Castle. Bertagnoli was the 2016 Junior champ and the inaugural KA100 title winner in 2017. Since then, on a limited schedule, has gone winless at USPKS over the last two years. The Illinois driver finished strong with a podium finish at the series finale and returns back with KartSport North America aboard the Kart Republic.

#1: Over the last four years, one name has been at the top of the national rankings in TaG competition – Ryan Norberg. The three-time EKN Driver of the Year is a four-time defending SKUSA champion and the current #1 in the EKN TaG Driver Rankings standings. The combination of Rolison Performance Group and Norberg have been a dominant mix and started 2020 with a title in the SKUSA Winter Series. This is Norberg’s first time at USPKS since a one-off start in the 2017 season.

National Champs: You have to go back to 2009, but Phillip Arscott was a national champion after he earned victory at the US Rotax Grand Nationals in Oklahoma. The elder in the category remains a quick driver on the track every time and joins the KSNA operation aboard the new Will Power Kart. Norberg is not the only SKUSA champion in the field. Lemke and Bertagnoli each have a Junior title to their credit, as does Arias Deukmedjian in 2018. After some brief Senior starts in 2019, the Florida driver is among the top contenders entering the weekend running alongside Bertagnoli and Arscott at KSNA, also aboard the Will Power Kart.

Back for More: Seven of the top-10 in the standings last year are in the field this weekend. Zach Hollingshead won the KA100 Senior title in 2018 and came 8 points short of the X30 Pro crown in 2019. The Florida driver is moving away from TB Kart and joining Speed Concepts Racing aboard the new Redspeed chassis. Jake Venberg (Franklin / Kosmic) had a breakout season in 2019, winning at New Castle one year ago and finished the title chase in third. Pauly Massimino (MDR / Kosmic), series veteran Armin Cavkusic (Comet / EOS), and Matthew Duncovich (MDR / Kosmic) are all returning as top contenders.

East vs. West: We typically see a great battle between the drivers of the east against those in the west at New Castle. This weekend will be no exception with the following team joining the party; Rolison Performance Group, Crosslink Competition, J3 Competition and Ryan Perry Motorsport. RPG is stacked as they have been over the last decade with talent, including Jacob Gulick, Branyon Tiner, Edward and Jonathan Portz. Crosslink has young guns Ryan Shehan and Riley Cann while California stars Jake Drew (J3 / CompKart) and Colby Dubato (RPM / Tony Kart) will make their USPKS debuts.

Road To Indy: Part of the HMG arm is Howden’s involvement with the Road To Indy program. Over the last decade, several karters have made their way up from karts and through the RTI up into the NTT INDYCAR Series. A number of those in the Road To Indy were part of the USPKS program. Returning to his roots is current Indy Pro 2000 driver Brayden Eves. A multiple winner at USPKS, Eves has his own karting operation and will be among the drivers competing on the weekend, coming off two top-five finishes at Road America. 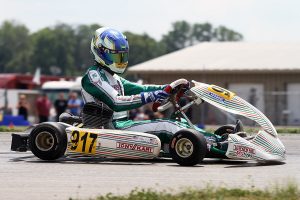 The sold-out KA100 Senior category is a sign that 100cc karting is what the USA is all about. USPKS was the first program in the country to showcase the category and entries have grown each year since that 2017 season. This weekend, a record turnout overall is due to the sold-out 53 drivers set to battle in the class. The top-11 along with all five different winners in 2019 are all returning in addition to a number of new faces and old contenders helping to fill up the largest field of KA100 karts ever!

Five podiums to close out 2019 helped guide Blake Hunt (SSC / Tony Kart) to the top of the championship podium in KA100 Senior. Hunt won and finished third at New Castle to help pad a 173-point advantage in the title chase. The North Carolina driver got the 2020 summer season off to a solid start with two runner-up results at the Route 66 Sprint Series. One driver who came away with victory at that weekend was 2019 vice-champion Josh Hotz (Franklin / Merlin). Hotz won the 2019 USPKS opener in Ocala and was top-five at New Castle last year. Matthew Mockabee (Comet / Kart Republic) earned a best finish of runner-up at GoPro to finish third in the standings, looking to defend his home track better this time around.

Emory Lyda (Nitro Kart), Arie Venberg (Franklin / Kosmic), PJ Lyda (SWR / Exprit), Sebastian Rivest (KSNA / Kart Republic), Julia Boos (LAK / OTK), Adam Crepin (Franklin / Exprit) and Garrett Adams (Comet / finished inside the top-10 last year in the standings, all set to battle in the record-setting field on the weekend. Three drivers aside Hunt and Hotz that won in 2019 are in the field; Colton Ramsey (Franklin / Exprit), Brooke Nachtmann (SSC / Tony Kart) and Stephen Dial (Milrock / Kosmic). Ramsey won at the opening weekend in Ocala and missed the rest of the season but is back to compete for the top spot once again. Nachtmann earned her first series victory at her home track of GoPro and went on to finish 11th in the season standings. Dial made one weekend in 2019, coming out with the series finale victory for his first triumph at USPKS.

The field is filled with former USPKS and national champions. Alex Bertganoli (KSNA / Kart Republic) is set to return back to the category after winning the inaugural series championship in 2017. The 2016 IAME Pro champ Brandon Lemke (Franklin / Merlin) is prepared to run double duty as well along with former SKUSA champion Arias Deukmedjian (KSNA / Kart Republic). 2018 USPKS X30 Junior champion Nicholas Terlecki (Franklin / Merlin) won at the Route 66 Sprint Series in his Senior debut, set for his USPKS coming out at the Senior level. Defending SKUSA Pro Tour champion Austin Osborne (IRM / Tony Kart) is making the trek up from Texas, hoping to improve on his USPKS debut performance at GoPro last year. Other former SKUSA champions include Luke Selliken (RPG / Kosmic) and Arizona’s Phil DeLaO (J3 / CompKart), who has been away from the national karting scene for several years. 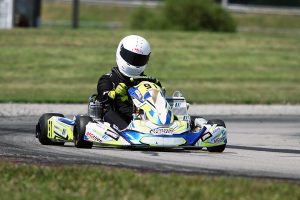 The field of the X30 Masters is currently at 17 entering the weekend, and the only class not at or above the total from the 2019 series finale at New Castle. Down only three from 2019, it could surpass the 20 count once the action begins Friday. Carrying the #1 plate in 2020 is defending champion David Galownia (CompKart). The Kentucky driver won the title in his series debut season riding off two victories in the six rounds. Florida’s Scott Roberts (SCR / Redspeed) was able to match the win total, coming up 63 points short in the title chase. Scott Kopp (Franklin / Exprit) won his first series main event at GoPro, finishing a close third in the standings. All three are back to rekindle their fight for the title.