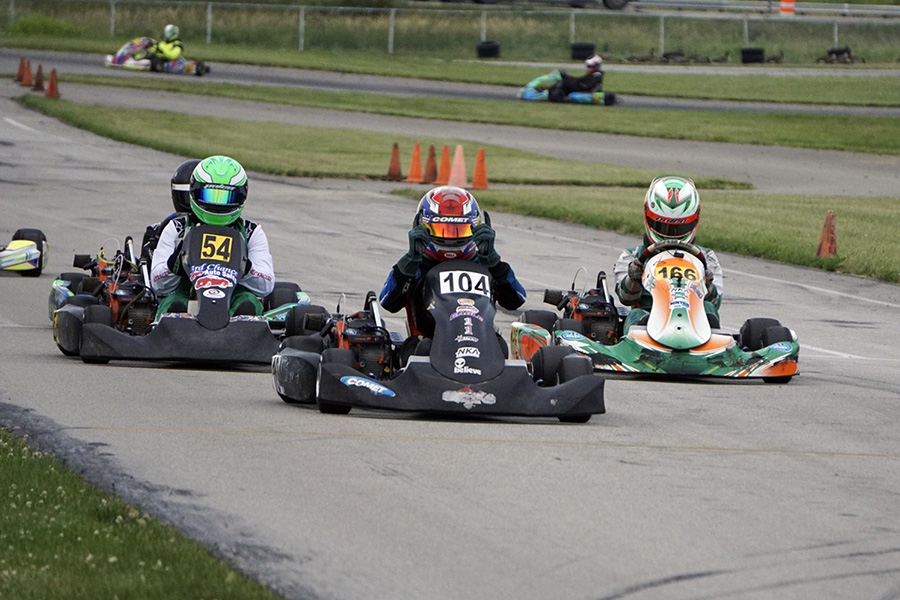 The second event of 2020 for the Cup Karts North America Champions Cup series took competitors to the New Castle Motorsports Park over the Independence Day weekend. Round Three and Four of the year were contested at NCMP after the opening event was held in June at 61 Kartway in Delmar, Iowa. A total of 129 entries for each round contested a new, extended circuit at the New Castle, Indiana facility for the first time to rave reviews and exciting racing all weekend long.

Before karts hit the track, the New Castle Motorsports Park brought in a traveling carnival featuring rides for all ages to experience Thursday through Saturday. A special barbeque was hosted by the track and series – presented by KartLift. And to cap things off, Saturday evening on Independence Day, one of the biggest fireworks shows in the state of Indiana greeted all the racers who stay at the track until dusk. On and off the track, the weekend was non-stop full of great memories. 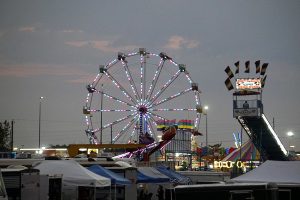 The largest category of the weekend was the CIK Senior Medium class with 32 entries and the last class on the schedule each day. Local drivers took control of the top spot throughout the weekend. NCMP’s own Garrett Adams set quick lap in qualifying with a 1:17.559 to edge out Mick Gabriel by only nine thousandths of a second. Gabriel got the better in Heat #1 was Adams was shuffled back to fourth. Gabriel crossed the line first in Heat #2, only to come across the scales underweight. That handed the win and Final pole position to Adams with Eli Fox on the outside of the front row. Adams was able to prevail in the 10-lap Final, winning by two tenths of a second as Clay Settles and Matthew Mockabee fought for second across the line. Settles won the drag race by 12 thousandths while Mockabee had fast lap of the race. Gabriel returned the following day with more speed, posting a 1:16.894-lap for fast time in qualifying, edging out series regular Vince Scatena. Adams was fourth in the session, but came out of the opening heat with the win and Gabriel second. The two flipped positions for the second heat with Eli Fox in third. Fox was able to save the best for last, posting the quick lap of the Final en route to the victory. Gabriel crossed the line second with Adams in third. 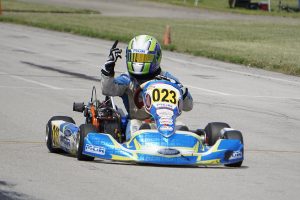 While Gabriel came up short in the Medium class, he dominated the weekend in the CIK Senior Lite division, featuring 17 drivers. Gabriel started the weekend off with a sweep of Saturday, finishing first in every on-track session. The day was capped off with a 1.9-second victory in the 10-lap Final over Jack Dorsey and CKNA Grand Nationals winner Eric Fagan. The perfect performance on the weekend for Gabriel was broken up by Evan Stamer, who came out of Sunday’s qualifying session with fast lap, edging Mick by 65 thousandths. Gabriel struck back by winning both heat races and driving away to 4-second advantage in the Final. Dorsey repeated as runner-up, beating Matthew Mockabee to the line for the second step of the podium. 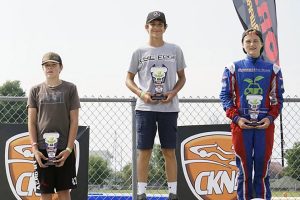 As competitive as the 28-driver Junior category is and has been, the same two drivers who won at 61 Kartway came away with victories at New Castle. The Saturday main event ended with issues coming to and after the checkered flag. It took the entire day for Cale Zimmermann, last year’s series Sportsman champion to finish at the top of the order, sitting sixth after qualifying as Kyle Sheard set fast time. Round One winner Carter Pryor came out with the win in Heat #1 while Logan Adams took Heat #2. Zimmerman worked his way up to fourth and second to put himself in contention for the main event. Adams and Pryor fought for the top spot the entire main event, including contact coming to the checkered flag. Adams and Pryor crossed the line 1-2, however, both were removed from the results for unsportsmanlike conduct. That awarded Zimmermann the victory ahead of Sheard and Jayelynn Kerr. Defending series champion James Overbeck found speed overnight to begin Sunday’s action on top in qualifying ahead of Violet Townsend and Pryor. Adams found himself back in eighth but worked himself up to the win in both heat races, edging out Pryor in Heat #1 and Sheard in Heat #2. Pryor was able to come out of the 10-lap main event battle with the checkered flag, crossing the line 1.4 seconds ahead of Overbeck and Josh Fiene. 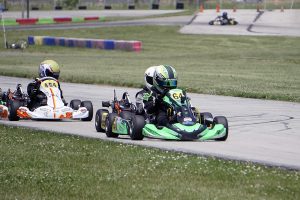 Double 61 Kartway winner Cade Jaeger set the tone in the 24-driver Sportsman division, starting out Saturday with fast time in qualifying. Kasey Williams and Aryton Grim followed him in the order, but each were able to take a heat race win with Grim in Heat #1 and Williams in Heat #2. Grim and Williams pulled away from the rest of the field in the 10-lap Final. Grim secured the victory by three tenths over Williams at the checkered flag. Caleb Tarter won the battle for third with Jaeger back in fifth. Nash Gierke joined the party up front on Sunday, setting fast time in qualifying and winning the opening heat race. Williams came back to win Heat #2 for the pole position in the Final. Gierke and Jaeger were able to get away in the Final to decide the victory, with Jaeger edging out by 13 thousandths for his third victory of the season. Williams beat out Grim, who had fast lap of the race, for the third step on the podium. 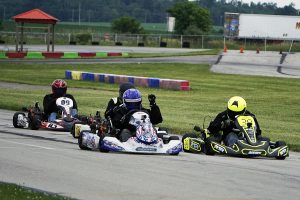 The Masters class saw another driver earn his third victory of the season, not before another earned his first on the year. Two-time 61 Kartway winner Jeff Scott was the driver to beat when racing began on Saturday, winning the two heat races. Scott led in the main event until contact took him out of the race with three laps remaining. That opened the door for Jerry Miller to take over and score his first victory of the season. Top qualifier Jason Rowe was second with Mike Stephenson a close third. While the racing was close, the same name finished first every session on Sunday with Scott taking control. After edging out the 15-driver field for fast time in qualifying, Jeff won both heat races. The main event went down to the wire with Scott crossing the line 79 thousandths ahead of Miller for the victory. Jeff Hill, who posted fast time in Saturday’s main event, drove to third with Stephenson recording the fast time in Sunday’s main event, placing eighth. 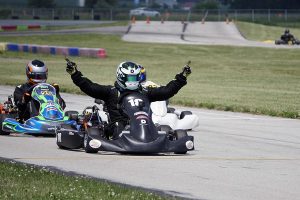 The CIK Senior Heavy division now has four different winners in the four rounds of racing. Ethan Dietrich and Drake Ostrom added their name to the list with wins at New Castle. Dietrich was able to sweep the action on Saturday, setting fast time, winning both heat races and the main event. Ostrom was a close runner-up, posting fast lap of the Final, with Eric Maitlen in third. Ostrom nearly had a sweep of his own with P1 in qualifying and Heat #1. Dietrich was able to nip Ostrom at the line for the win in Heat #2. Ostrom responded with a victory in the Final for his first at the series. Dietrich was runner-up with Maitlen in third, posting fast lap of the main event. 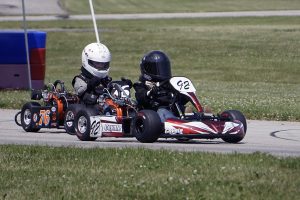 Jay Boon was able to double up in the Kid Kart division, beating out 61 Kartway double winner Alex Haese. It was Haese leading throughout the day on Saturday until the Final when Boon took over and scored the victory. Haese was second with Summit Rossiter in third, recording the quick lap of the Final. Haese set fast time in Sunday’s qualifying session but it was Boon to close out the day on top. After winning the two heat races, Boon drove to victory in the Final. Haese set fast time in the race, placing runner-up with Jaxson Stone in third.

The Cup Karts North America Champions Cup program returns to action on July 24-26, heading to the Michiana Raceway Park in New Liberty, Indiana. Registration and reserved parking is available online – along with all information regarding the CKNA – at www.cupkarts.com.