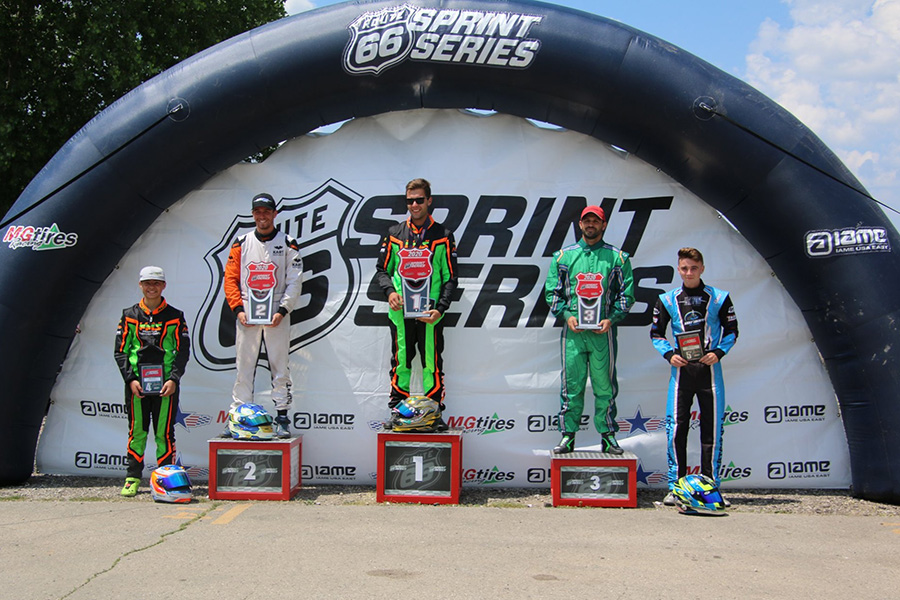 The chase for the Route 66 Sprint Series championships – presented by MG Tires and Franklin Motorsports – began over the Independence Day weekend at the historic Road America facility. The start to the 2020 season was delayed due to the COVID-19 pandemic, and a reschedule of the season opener was put on July 3-5 at the CTECH Manufacturing Motorplex in Elkhart Lake, Wisconsin – presented by A-Maxx Racing and BBS Race Engine Development. Nearly 100 entries each day competed in two rounds of racing to begin the 2020 program.

The recently repaved circuit at Road America welcomed competitors from all over the Midwest and eastern half of the United States. Briggs & Stratton Racing, a new partner to the series, provided their first round of prizes on the year. The top-three finishers in Briggs 206 Sportsman on Saturday and Briggs 206 Senior Medium on Sunday were awarded a $125 gift card. A raffle for a new Briggs 4500 watt generator went to Austin Olds. More prizes will be awarded at the other Route 66 events on the year. A Fourth of July firework display ended the day on Saturday, following a full day of racing with practice day taking part on Friday. Sunday was the second round of racing for all nine categories. 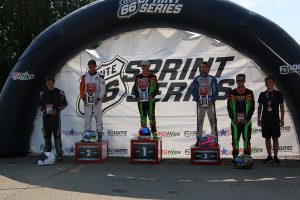 The largest class of the weekend was the Woltjer Racing Engines KA100 Senior division with 35 drivers competing for the checkered flag each round. Former ‘Throwdown’ winner and defending series champion Josh Hotz kicked off the season with a maximum point day. It was a close situation in qualifying with the top-three separated by only nine hundredths of a second led by Hotz. Lucas Smalec and Zach Della put on the pressure in the short three lap session. The top challenger transferred over to former series champion Alex Bertagnoli, finishing second to Hotz in the Prefinal. Hotz made sure nothing was close at the checkered flag in the Final, driving away to 2.4-second victory over North Carolina’s Blake Hunt. Series veteran Adam Crepin placed third with Nicholas Terlecki fourth in his Senior debut at the series. Bertagnoli had fast time in the race, ending up fifth. Sunday put an end to Hotz attempt at a perfect weekend with Smalec finding that extra speed to claim the top spot in qualifying with Terlecki a close second and Hotz in third. Hotz leaped past both in the Prefinal to a 3.3-second advantage in the Prefinal after 12 laps. Smalec was a DNF after 10 laps while Terlecki was classified seventh. Terlecki found speed no one could match in the Final, however, advancing up from seventh to first en route to a 1.6-second advantage with fast lap of the race. Hunt settled in for another runner-up finish after a race long battle as Alexander Kardashian and Charlie Mohr put themselves on the podium in third and fourth. Hotz ended up placing fifth, leaving the event with the championship lead. 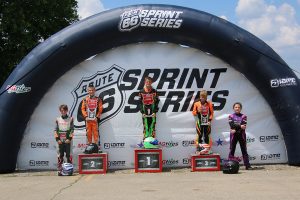 Two drivers were able to leave Road America with a weekend sweep, both coming in the Cadet divisions. Cameron Brinkman kept his name at the top of the Mills Pallet Inc. Mini Swift category all weekend. The defending champion cleared the field in qualifying by eight tenths of a second. He then drove to wins of 11 seconds and 16 seconds in the Prefinal and Final for a perfect day. Levi Copass won the battle for second over Brayden Zirves with Indy Ragan and Ava Hanssen completing the top-five for Saturday. Sunday was a similar story as Brinkman dominated the day. After posting a lap time over a half-second clear of the field, he won the Prefinal by over six seconds. The margin of victory in the Final was nearly eight seconds to cap off a perfect weekend for Brinkman. Ragan advanced to second in Round Two with Zirves holding third. Austin Olds finished fourth with Hanssen repeating in fifth. 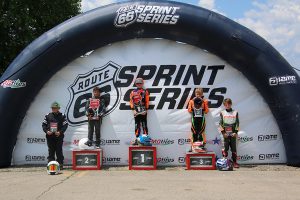 Running double duty, Austin Olds used the extra track time to his advantage in the DNJ Intermodal Services Briggs 206 Sportsman category. Olds led the category all day Saturday, including a quick time of more than a half-second in qualifying. Brayden Zirves, who qualified second, kept things close throughout the Prefinal and Final. Olds was able to win both races to claim a perfect day on Saturday. Zirves crossed the line in the main event as the provisional runner-up but was penalized one position for a bumper penalty. That moved Jase Petty to second in the final standings for the day. Mason Rick and Indy Ragan rounded out the top-five. Olds picked up the pace on Sunday for Round Two, driving away to wins of four seconds in both the Prefinal and Final for a complete sweep of the weekend. Zirves had fast time in the main event, earning a solid runner-up finish. Ragan improved to third with Rick holding fourth as Petty fell to fifth. 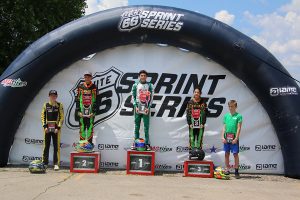 Aiden Levy was able to double up in the win column for the Allison Racing Engines KA100 Junior class. The Charlotte, NC driver swept the action for Round One, beginning with a solid lap in qualifying to clear the field by six tenths. Fast laps of the race in the Prefinal put him out front comfortably and once again in the main event, finishing with a 7.1-second advantage after 16 laps. Bryce Mersberger won the battle for second over Ava Dobson with Matthew Novak and Austin Jurs completing the top-five. It was Mersberger that broke up the perfect score for Levy, as he edged out the Saturday winner by 78 thousandths for fast time in qualifying. Levy came back to win the Prefinal but Mersberger had a bit more in the Final. Mersberger was able to reach the checkered flag first after 16 laps, however, was moved back one position for a bumper penalty. That gave Levy the victory with Dobson making it the same top-three. Cameron Christ ended up fourth with Novak in fifth. 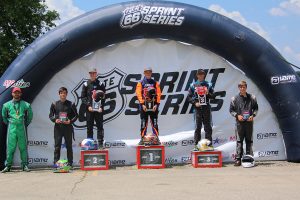 The largest of the new Briggs & Stratton categories at the Route 66 Sprint Series was the B&B Electric Briggs 206 Senior Medium division. The 13-driver class was among the more competitive categories of the event with the top position changing every session. Series veteran Adam Crepin become the inaugural top qualifier, edging out Hunter Peri by 44 thousandths. It would be Peri in the record books as the driver to win the first wheel-to-wheel session, holding off Nick Ksobiech for the Prefinal win. In the Final, 2019 X30 Junior series champion Adam Maxwell came from the fifth starting spot to claim the first series win in the category. Peri ended up second with Ben Lyda posting the fast lap of the race to a third place result. Ksobiech was fourth with Charlie Mohr fifth. Sunday was Ksobiech’s turn at the top of the podium. After qualifying first, the Wisconsin driver fell to fifth in a competitive Prefinal that saw Lyda earn the race win. In another great battle for 16 laps, Ksobiech emerged as the winner in the Final ahead of Peri, Crepin and Lyda. Senior rookie Maxwell had fast lap of the race, placing fifth. 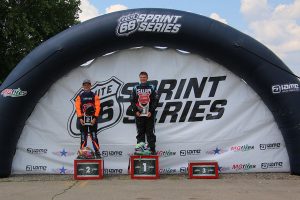 Maxwell added a second victory on his Senior debut weekend at the Route 66 Sprint Series in the Mills Pallet, Inc. Briggs 206 Senior Heavy class. He and Matt Lyda each took home a win in the new category. Lyda struck first, winning the Saturday main event after Maxwell retired on lap two. Maxwell came back to sweep Sunday. Lyda kept it close, finishing only three tenths back of Maxwell in the Final. 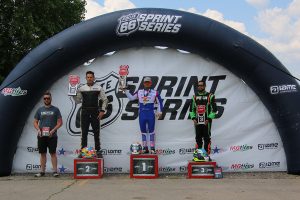 Laurentiu Mardan and Scott Kopp each scored a victory in the new BBS Race Engine Development KA100 Senior Heavy division. Mardan was able to sweep the action on Saturday to become the inaugural class winner. The main event saw Mardan take the checkered flag eight tenths ahead of Cristian Vomir. TJ Nevels finished third ahead of Scott Kopp and Kevin Kullman. Mardan began Sunday in similar fashion, setting fast time in qualifying and winning the Prefinal. Kopp found extra speed on the day, and drove to the victory after 16 laps. Vomir was runner-up once again with Mardan back to third. Kullman and Nevels completed the top-five. 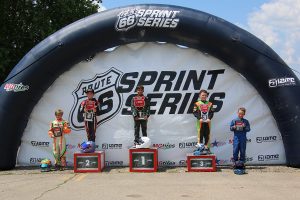 The One Powersports Micro Swift class welcomed two new winners on the weekend. Jase Petty secured the victory for Round One. After qualifying fourth, Petty drove to the win in the Prefinal. He was challenged by top qualifier Sarah Bradley throughout the main event, coming away with the victory. Bradley recorded fast lap of the race in second with Benym Abernethy, Ethan Tovo and Landon Buher rounding out the top-five. Bradley took that speed into Sunday to sweep the action for her first win at Route 66 Sprint Series. Bradley capped off a stellar day with victory in the main event by two tenths over Abernethy. Petty set fast time in the Final, placing a close third with Buher fourth and Tovo fifth. 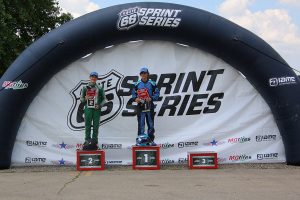 Two different drivers won in the new Advance Design Studio Briggs 206 Junior class. Tyler Trapp and Brian Vacek were the only two drivers in the field, each taking a victory. Saturday was Trapp on top of the podium for the inaugural class victory. Vacek was quickest in qualifying and won the Prefinal but came up short in the main event. He recorded fast time in the Round One main event and took that speed into Round Two for victory. Vacek set fast time during qualifying with Trapp winning the Prefinal. The two were close throughout the Final, with Vacek edging out Trapp for the victory.

The Route 66 Sprint Series returns to the state of Wisconsin on August 29-30 for Round Three and Four of the 2020 championship series. The Badger Kart Club will host competitors to the Wolf Paving Raceway in Dousman, Wisconsin – with the event presented by A-Maxx Racing. Registration for the weekend will open soon. More information regarding the Route 66 Sprint Series can be found online at www.route66kartracing.com or on the Facebook page.