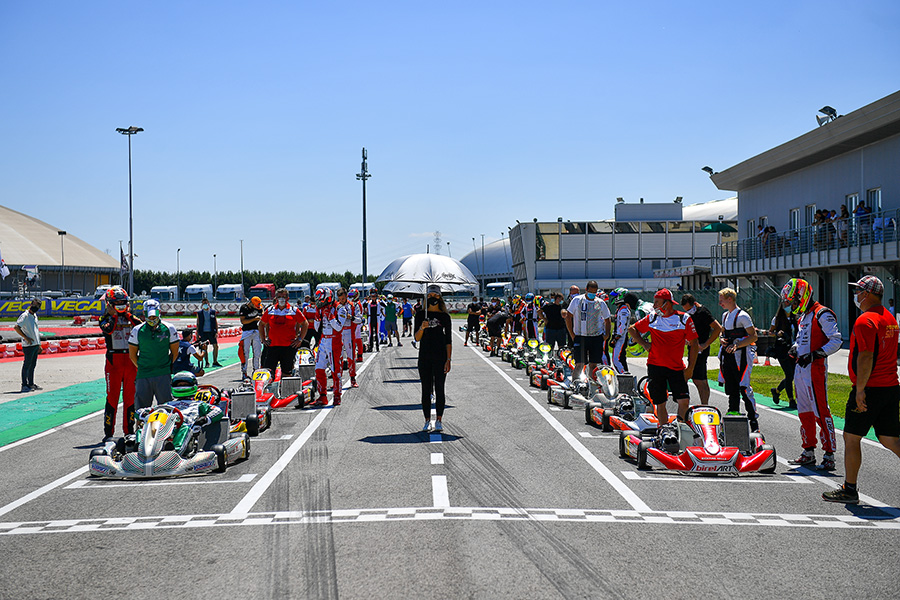 The WSK Super Master Series ended at the Adria Karting Raceway with the closing two rounds one after the other. The third and fourth round of the series inaugurated an innovative format with a whole week dedicated to International Karting.

WSK karting post Covid-19 started off well, as teams and drivers from 34 Countries honoured once again this International competition that crowned this year the Finn Simo Puhakka in KZ2, the Russian Nikita Bedrin in OK, the Brit Arvid Lindblad in OKJ and the Russian Dmitry Matveev in MINI.

In KZ2 the Finn Simo Puhakka (Tony Kart Racing Team/Tony Kart-Vortex-Vega) completed a perfect weekend. He recovered well from qualifying of Round 3 winning the Prefinal and Final and then replicated this success in the Prefinal and Final of Round 4. Giuseppe Palomba (Birel Art Racing/Birel Art-TM Racing-Vega) was his main rival. He has been leading the classification until Round 3, but the Italian could not stop Puhakka’s raise and had to settle for the second place in the championship. This is the first title of WSK Super Master Series for Puhakka after the second place he secured in KZ2 back in 2015.

The Russian Nikita Bedrin (Ward Racing/Tony Kart-Vortex-Bridgestone) had the upper hand in the double exit in Adria and claimed the full haul in Round 3 and 4. The points collected in the Prefinals and Finals in Adria launched him to the top of the classification recovering from a season opening mean with satisfaction. In Adria, he had to face the competition of strong rivals like the Italian Andrea Kimi Antonelli (KR Motorsport/KR-Iame-Bridgestone), who was leading the classification in the Round 3 and the Spanish driver Pedro Hiltbrand (Tony Kart Racing Team/Tony Kart-Vortex-Bridgestone), but the two drivers went off in the closing final, Antonelli due to a contact and Hiltbrand due to a strong rib pain. Bedrin claimed therefore his maiden WSK Super Master Series title after being second in MINI in 2017. 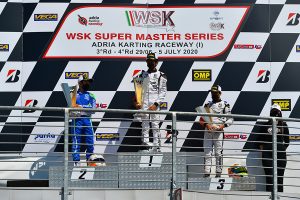 USA driver Ugo Ugochukwu on top of the OKJ podium for Round 4 of the WSK Super Master Series event.

The pace of the British driver Arvid Lindblad (KR Motorsport/KR-Iame-Vega) in OKJ has always been high and he managed to claim two wins in Prefinal and Final in Lonato as well as in Adria’s Round 3. He also won the Prefinal of Round 4 in Adria. He settled for P3 behind his two teammates Ugo Ugochukwu and Alfio Andrea Spina in the closing Final. The Pole Karol Pasiewicz (Tony Kart Racing Team/Tony Kart-Vortex-Vega) and the Italian Brando Badoer (KR Motorsport/KR-Iame-Vega) were among the quickest drivers and claimed P2 and P3 in the final classification of the championship. This is Lindblad’s first tile if WSK Super Master Series. Last year he came second in OKJ at the WSK Champions Cup.

The Russian Dmitry Matveev (Energy Corse/Energy-TM Racing-Vega) kept his momentum in Adria’s MINI and confirmed himself among the strongest racers winning the title thanks to the results scored in Adria and Lonato. He won the third round in Adria and came fourth behind the Japanese Kean Nakamura Berta (Team Driver Racing Kart/KR-Iame-Vega) in the fourth round, as the latter ended the championship classification in second place. The level of the competitiveness has been very high despite some drivers that had been shining early into the season could not be present in Adria like the Russian Gerasim Skulanov (Formula K Serafini/IPK-TM Racing) and the two Parolin Racing Kart’s drivers Anatholy Khavalkin and Rashid Al Dhaeri. Matveev had previously won the WSK Final Cup and came second in WSK Open Cup in 2019.

IN SARNO FOR THE WSK EURO SERIES. The WSK racing calendar continues now relentless with the first of the three races of WSK Euro Series that will take place from July 8th to 12th in Sarno at the International Circuit Napoli. The WSK Euro Series will then continue in Lonato from September 14th to 20th with Round 2 and 3.

Complete results are available at www.wskarting.it.