Winners for Third Round of WSK Super Master Series in Adria 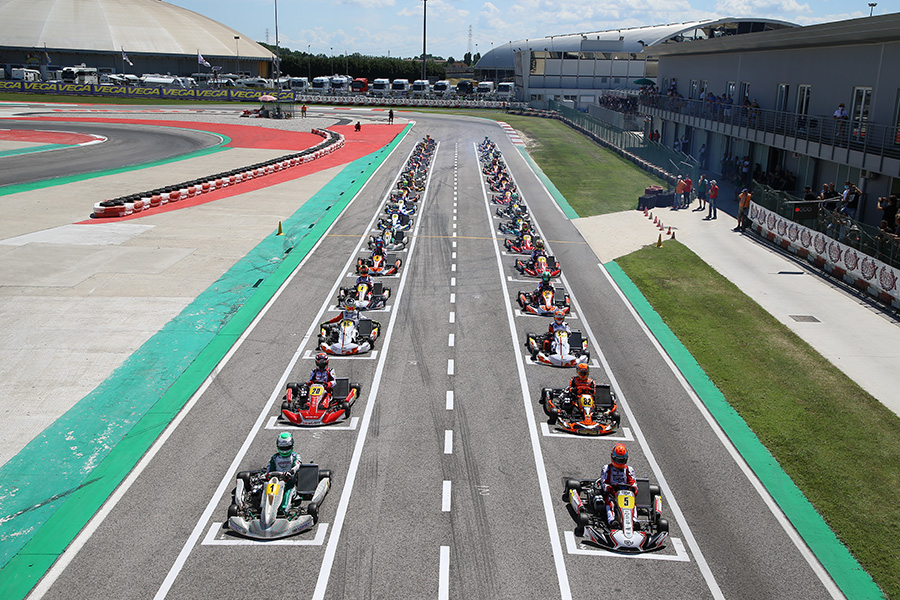 The Final stages of this exciting WSK Super Master Series has started after the restart post Covid-19 emergency at the Adria Karting Raceway. This event spanned a whole week dedicated to the third and fourth round that will end this WSK Promotion’s championship.

Prefinals and Finals for the third round of the series of KZ2, OK, OKJ and MINI took place on Saturday, July 4th. These finals awarded big points valid for the classification ahead of the final act of the 2020 WSK Super Master Series on Sunday.

PUHAKKA WINS ROUND 3 IN KZ2 AND ATTACKS PALOMBA

ANTONELLI IS THE NEW LEADER OF OK

In OK, the Russian Nikita Bedrin (Ward Racing/Tony Kart-Vortex-Bridgestone) confirmed to be the strongest driver of the category and won the final after winning Prefinal-A. A good  step forward in the classification was made by the Italian Andrea Kimi Antonelli (KR Motorsport/KR-Iame-Bridgestone), the other brilliant protagonist of this category that, after winning Prefinal-B, claimed up to a great P2 in the Final taking the second place of the championship’s classification. The Brit Taylor Barnard (Rosberg Racing Academy/KR-Iame-Bridgestone) was also among the best and confirmed his speed taking the third step of the podium. The Spaniard Pedro Hiltbrand (Tony Kart Racing Team/Tony Kart-Vortex-Bridgestone) had to settle for the fourth place despite a good comeback in qualifying, but this results confirmed him as the runner-up in the championship campaign, as he stands 8 points short of Antonelli. The Brit Joe Turney (Tony Kart Racing Team/Tony Kart-Vortex-Bridgestone) had an unlucky final as a contact relegated him to P29 and made him lose the lead of the classification. He is now third at 27 points.

STRONG LEAD FOR LINDBLAD IN OKJ

In OK-Junior the British driver Arvid Lindblad (KR Motorsport/KR-Iame-Vega) confirmed himself on top of the classification thanks to a strong win from an as quick teammate Brando Badoer, who has always kept himself in the slipstream of the leader and ended second. The podium was rounded off by Karol Pasiewicz (Tony Kart Racing Team/Tony Kart-Vortex-Vega), while the other Pole Tymoteusz Kucharczyk (BirelArt Racing/RK-TM Racing-Vega) was fourth. Alfio Andrea Spina was hit by bad luck and could not improve his classification, as he had to retire early from the race after shining in Prefinal with P4.

MATVEEV HEADING TO THE TITLE IN MINI

The podium of this final of MINI was decided at the last lap in a three-way sprint to the line. The Russian  Dmitry Matveev (Energy Corse/Energy-TM Racing-Vega) kept the lead early on, but the Pole Jan Przyrowsky (AV Racing/Parolin-TM Racing-Vega) found his way past him later on. Matveev managed to get back on top in the closing lap and the quick Japanese Kean Nakamura Berta (Team Driver Racing Kart/KR-Iame-Vega) made the most of the closing battle overtaking Przyrowsky for P2. Przrowsky ended in fact third leading Antonio Apicella (Apicella/Energy-Iame-Vega) and the Pole Maciej Gladysz (Parolin/Parolin-TM Racing-Vega). Matveev kept the lead of the classification thanks to this win.

The program will reach its conclusion on Sunday, July 5th with Prefinals and Finals of Round 4, available through the Live Streaming feed from www.wskarting.it.