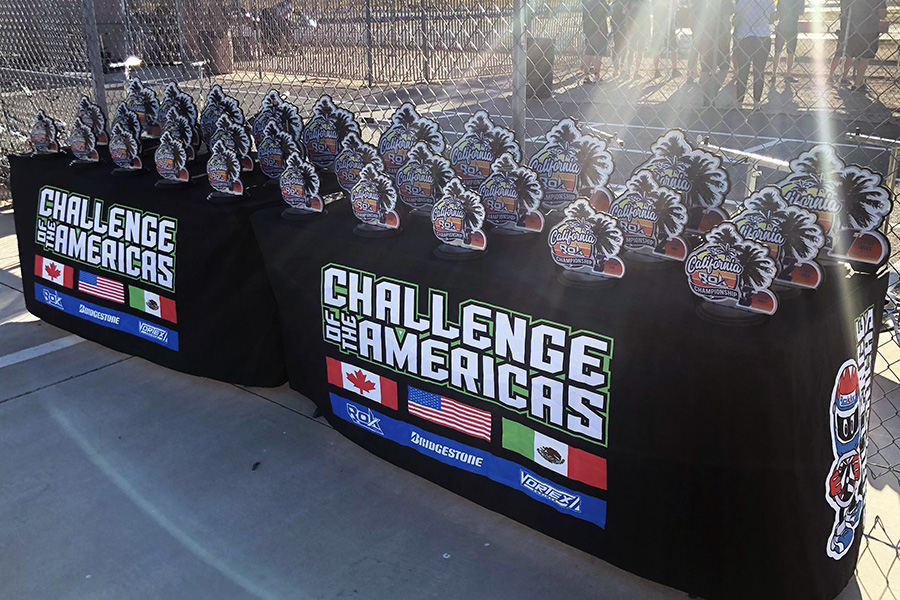 The 2020 season for the California ROK Championship opened up in the state of Arizona. Due to the ever-changing mandates and guidelines surrounding the state of California, the second season for the ROK Cup USA regional program moved its first event of the summer season to the Phoenix Kart Racing Association for two days of afternoon and evening action on June 19-20. Series officials had a month of planning and working with local authorities to build a plan to ensure proper safety protocols in terms of the Coronavirus disease.

Race teams and competitors, anxious and excited for a return to the kart track, helped to build a record total of 105 entries in 10 categories for the season opener of the California ROK Championship. Temperatures were in the triple digits at its peak over the two days of racing, with action beginning each day at 2:30pm local time. Four rounds of official practice took place Friday afternoon before qualifying under the lights shaped the grids for the two heat races Saturday afternoon. Results from those heat races formed the main event lineups with the Final beginning just as the sun set below the surrounding mountains of the Glendale, Arizona facility.

Local contingent took a handful of victories at the event, including one in the competitive SwedeTech Racing Engines Shifter ROK category. The class include a number of the top drivers from the western half of the United States, including those who battled during the Challenge of the Americas season this winter. Kyle Wick, the #5-ranked pilot in the eKartingNews.com Driver Rankings, set the pace in qualifying with a 42.235-lap, edging out top-10 ranked driver Kol Bailey and COTA vice-champion Cole Shade. Contact on the opening lap of Heat #1 took Wick out of the race after just three corners. This allowed Shade to go on to win the race ahead of PKRA regular Micah Hendricks. Things worked out much smoother to begin the second heat race as Bailey was able to edge out Wick for the race win. The grid for the main event put Shade and Bailey on the front row with Hendricks and 2020 COTA champion Hunter Pickett in row two. Hendricks slipped back to fourth but took his time, using the home track knowledge under the lights to work past the top-three and take the victory after 15 laps. Shade led the majority of the race and finished second with Bailey completing the podium in third. Pickett ended up fourth with Jace Denmark-Geessl in fifth.

The largest category of the weekend was the Forward Direction Motorsports Senior 100cc division, welcoming 30 drivers. It was a near sweep for Colorado driver Hannah Greenemeier. Local stars Toby Longenecker and former COTA champion Phil DeLaO set the fast two times in qualifying as Greenemeier found herself in third after the session. Greenemeier was the quickest driver for the remainder of the event, earning fast time in both heat races and the main event. That translated into two heat wins and a 1.4-second advantage after 15 laps in the main event. Jake Drew established himself into the second position with Michael Michoff placing third. Joey Brienza and DeLaO completed the top-five.

The Junior victories on the weekend were swept by PKRA native Parker DeLong. In his Junior debut, DeLong won both the Apollo Motorsports Junior ROK division and VemmeKart Junior 100cc class. DeLong was not the top contender until the final laps in each main event. Two-time COTA winner Frankie Mossman set the pace in qualifying for Junior ROK and won the opening heat race, but was removed in tech. This provisionally put Logan Toke to P1 but a two-position penalty for contact dropped him to third and moved Casey Blatz to the win. Mossman came back to win Heat #2 with DeLong in second. DeLong then took over in the Final, driving away to 1.5-second advantage after 12 laps. Toke and Blatz joined him on the podium with Mossman retiring after two laps. David Williams and Deanna Hoffman capped off the top-five.

Jacob Hoover was the top driver early in the Junior 100cc class. He edged out DeLong for fast time in qualifying as only 14 thousandths separated the two, with a close finish in Heat #1 between the top-two. Trammell was the quickest driver in the race, placing third, and used that same speed to score the win in Heat #2. The top-three fought strong all 15 laps in the Final, with DeLong coming away as the victor. Trammell, who recorded fast time, crossed the line in second but was handed a two-second penalty for a starting lane violation. That promoted Hoover to second and Logan Toke to third. Cooper O’Clair was classified fifth behind Trammell.

eKartingNews.com TaG Driver Rankings #1 Ryan Norberg made his mark in what was his California ROK Championship debut, sweeping the Ruthless Karting Senior ROK division. Norberg and Hannah Greenemeier went 1-2 in every session on the weekend. The Final saw Norberg take the checkered flag by just under one-second ahead of Greenemeier. Jace Denmark-Gessel joined them on the podium in third with Liam Letzsch and Jenson Altzman completing the top-five.

Another near sweep came in the Ron White Racing Shifter ROK Masters class with Jason Campbell at the helm. Only 26 thousandths separated the top two in qualifying with Campbell posting the fast lap and Nick Firestone in second. Campbell was able to lay down the quick lap of the race in Heat #1, but Firestone scored the win. Campbell came back to win Heat #2 and held off Vivek Tandon, who recorded fast lap of the race, to win the Final. Firestone completed the podium. Michael Guasch was fourth and Lonnie Hochstetler ended up fifth. Chris Carel went unchallenged in the Odenthal Racing Products Masters ROK division.

The top spot in the Acceleration Kart Racing Masters 100cc class was up for grabs all weekend long. Ron Jenkins was able to secure fast time in qualifying before Brett Harrelson and Jonathan Silva each won a heat race. Placing third in both was veteran driver and former COTA champion Billy Cleavelin. In the 15-lap Final, Cleavelin was able to emerge as the top driver and score the victory. Jenkins finished second with Harrelson in third. Pat Beckley and Robert Perez rounded out the top-five.

Tristan Young secured the Challenge of the Americas title this winter and began the California ROK Championship at the top of the standings thanks to a victory at PKRA in the GFC Karting Mini ROK class. Young nearly recorded a sweep on the weekend. After Young set fast time in qualifying, Rocky Moran was able to beat him to the checkered flag in Heat #1. Young fought back to win Heat #2 before driving to a 1.9-second advantage in the Final for the victory. Moran drove to second as Alex Rantala, who recorded the fast lap of the race, won the fight for third ahead of Wyatt Vidovich and Alexander Gonzalez.

A total of seven drivers contested the Empire Karts Micro ROK class on the weekend with Jaxon Porter earning his first series victory. Ashton Woon was the driver with the quickest lap in qualifying and was awarded the win in Heat #1 after provisional winner Tristan Murphy was penalized for a starting lane infraction. Murphy was able to come back with a win in Heat #2 with Porter in third, recording fast lap of the race. Porter took that speed and drove to the checkered flag first in the 15-lap final, holding off Braylon Underwood and Woon. Murphy was fourth with fast lap of the race with Charlie Smith in fifth.

During the Micro main event, which was the first Final in the order, saw the track lights go out due to a blown fuse. The race continued as the sun was still setting and the young drivers handled the conditions well. The final few laps saw some great racing and an exciting finish. Repairs forced an hour-long delay, forcing the laps to be cut for the remainder Finals. Special thanks to Kris Hendricks and the other PKRA members on-site for fixing the issue to get the event back on track.

The California ROK Championship returns to action on July 18-19 at the Sonoma Raceway facility in northern California. Over the last week, the facility confirmed its return to welcome racers with the ROK Sonoma program set to host its first race on July 4. The California ROK Championship event is in conjunction with the ROK Sonoma program. Their staff will run the event, with CRC using the event for points. Those who missed the PKRA event still have a chance to put themselves into the championship chase with the best 3 of 4 rounds counted in the championship. CRC’s Andy Seesemann along with his Full Throttle Karting operation will be on-site in a supporting role, selling Bridgestone tires and ROK parts for all customers and dealers.

Details surrounding the second round of the California ROK Championship, including pre-registration and possible COVID-19 guidelines, will be posted in the coming days. Bookmark www.challengekarting.com for now.