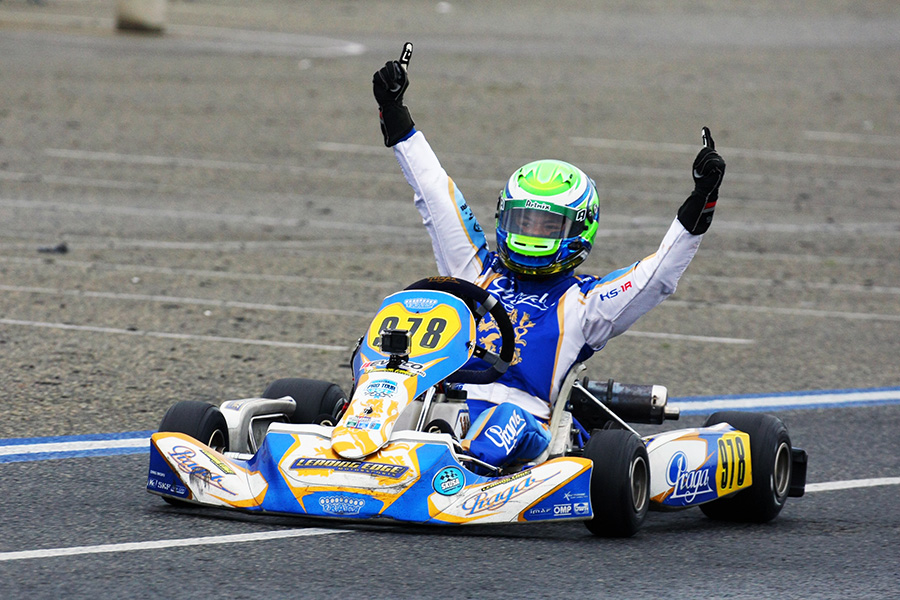 It has been a memorable start to the 2020 season for Leading Edge Motorsports driver Oliver Calvo. The two signed a deal late in 2019 and have taken the new year by storm in not just one class, but two. Calvo, beginning his second season in the Senior ranks, is coming off a solid rookie year at the ProKart Challenge where he earned the KA100 Senior championship and was one of the top contenders at the SuperNationals 23 in his debut with LEM and Praga.

That set the stage for a quick attack on the 2020 season, beginning with the ROK Cup USA Challenge of the Americas. In January at the opening event in Tucson, Calvo won three of the four main events, competing in Senior ROK and Senior 100cc. An issue with an actual rock somehow getting into the engine in the Prefinal and contact in the Final cost Calvo the opportunity of going four-for-four. The program traveled to the CalSpeed Karting circuit in Fontana, California on February 21-23 – a place Calvo has plenty of laps on. 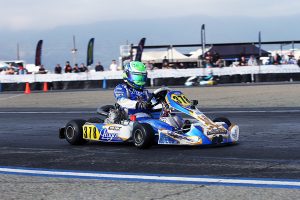 CalSpeed was a repeat of Tucson for Calvo, winning two in Senior 100cc and one in Senior ROK (Photo: EKN)

Senior ROK was the division Calvo had issues in during the opening round, unable to complete a single lap of competition. It was ‘déjà vu’ again in CalSpeed on Saturday as a mechanical issue kept Oliver from completing a lap in qualifying. This put him 14th on the grid of the Prefinal. While he wasn’t the quickest driver on the track, he did pass the most karts in the 12-lap run. Calvo was up to seventh on the opening circuit and into second by lap eight, finishing the race there. The main event was met with a challenge in weather conditions. A brief shower for the class prior to them sent everyone running for the rain tires. As that race finished up, the skies cleared, and the track quickly began drying. The class was sent out with all but one driver on rain tires. Rain never returned and that driver – Airel Jimenez – drove away on dry tires for the victory. Calvo was ‘best in class’ running second overall, and the first driver with rain tires to score maximum points in those racing for the championship.

Calvo swept the action on Sunday in Tucson, and nearly did the same in Fontana. Only 89 thousandths kept him from earning fast time in qualifying with Jenson Altzman posting the quick lap. Oliver was able to come away with the Prefinal win but found himself in trouble at the start of the Final. Calvo fell back to 10th on the opening circuit with contact in the first corner. Fast laps of the race put him up to third by the halfway point of the 20-lap main event as he attempted to run down the top-two. Their fighting for the lead helped Calvo cut into what was a five-second disadvantage and joined them for a last lap battle. Calvo was able to go from third to first, securing his second victory in the category on the season.

The Senior 100cc category at the Challenge has been all Calvo in the main events. He swept the action in Tucson, running P1 in all on-track sessions. After qualifying P1 for Round Three, Oliver found himself shuffled back to the tail of the field in the Prefinal, ending up 10th. The main event was pushed over to Sunday morning as a red flag in the class before them forced the postponement. Rain hit the area overnight and the track remained wet through the morning hours. Their main event was a gamble, with half the field putting on rain tires, and the rest on dry tires. Calvo led the train of drivers on dry tires once the track began drying, working his way up to the front quickly. The final few laps were a wild battle, with Oliver coming out with the top position for his third win of the season.

Sunday provided more drama at the end of the day, yet with the same result. Calvo set fast time in qualifying however came one position short of the win in the Prefinal, losing to Alex Siragusa. Additional delays on the day forced a quick 10-lap shootout for the main event with the sun setting in the west. Calvo led the final nine of 10 laps ahead of Siragusa to earn his fourth straight victory in the category at the Challenge.

Oliver holds a 128-point advantage with his four wins in the Senior 100cc championship standings ahead of defending champion Colby Dubato. Calvo is second in the Senior ROK point standings, trailing Round One winner Jake Drew by only 10 points, holding the win advantage with his two wins to Drew’s one. Both championships will be decided with Rounds Five and Six contested at the Simraceway Performance Karting Center in Sonoma, California. The event was originally scheduled for the March 27-29 weekend and has since been moved to May 15-17 due to the COVID-19 pandemic. 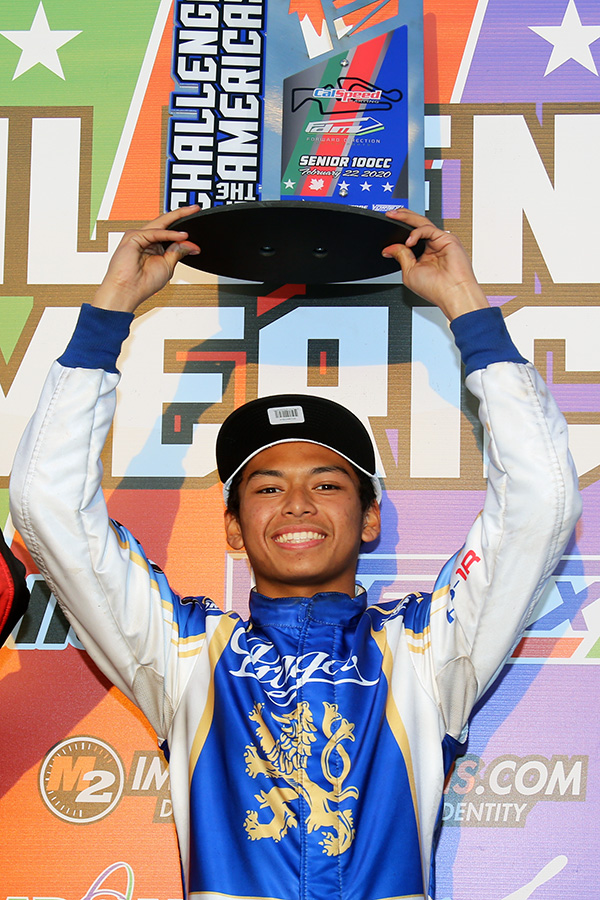 Chassis: Praga Dragon Evo 2
Engine/Engine Builder: IAME / P1 Engines; ROK GP / MEGA Power
Sponsors: Leading Edge Motorsports, Praga Global, IPK North America,  Mom and Dad, P1 Engines
Series You Compete In: Challenge of the America, KPX Karting Championship , SuperKarts USA
Years Karting: 11
How did you get started in karting? My grandfather used to race which led to my father racing and now me!
What has been the high point in your racing career? I have been blessed to have had many great moments throughout the years. I would have to say my top three would be finishing fifth at SuperNationals 20 in my first year as a Junior, winning the Streets of Lancaster four times, and winning KA100 Senior ProKart Challenge championship in 2019
What are your goals in racing? I would love to win SuperNats and have the opportunity to race in Europe
In a few words, how would you describe your driving style? Focused, Driven, and Competitive
Funniest moment at the race track? N/A

What do you do when not at the track? Playing video games, study, and hanging out with friends
What are your goals outside of karting? Going to college, graduate with a degree, and travel the world
What app or game do you play right now? Tik Tok
What type of street car would you like to drive? Subaru WRX
What are your pet peeves or things that irritate you? Trying to teach someone and they don’t listen or take it seriously
What do you think could be done to improve the sport of karting? I believe that there is too many race series out there. Condense them. To the average person it is not realistic to run them. It comes down to which one not only will break the bank but which one will draw the best competition. As a driver, I look forward to testing my skills against the best of the best
What are your favorite aspects about the sport of karting? Being able to give it my all on the race track and making friends. Plus, finding a team that also becomes a part of your extended family