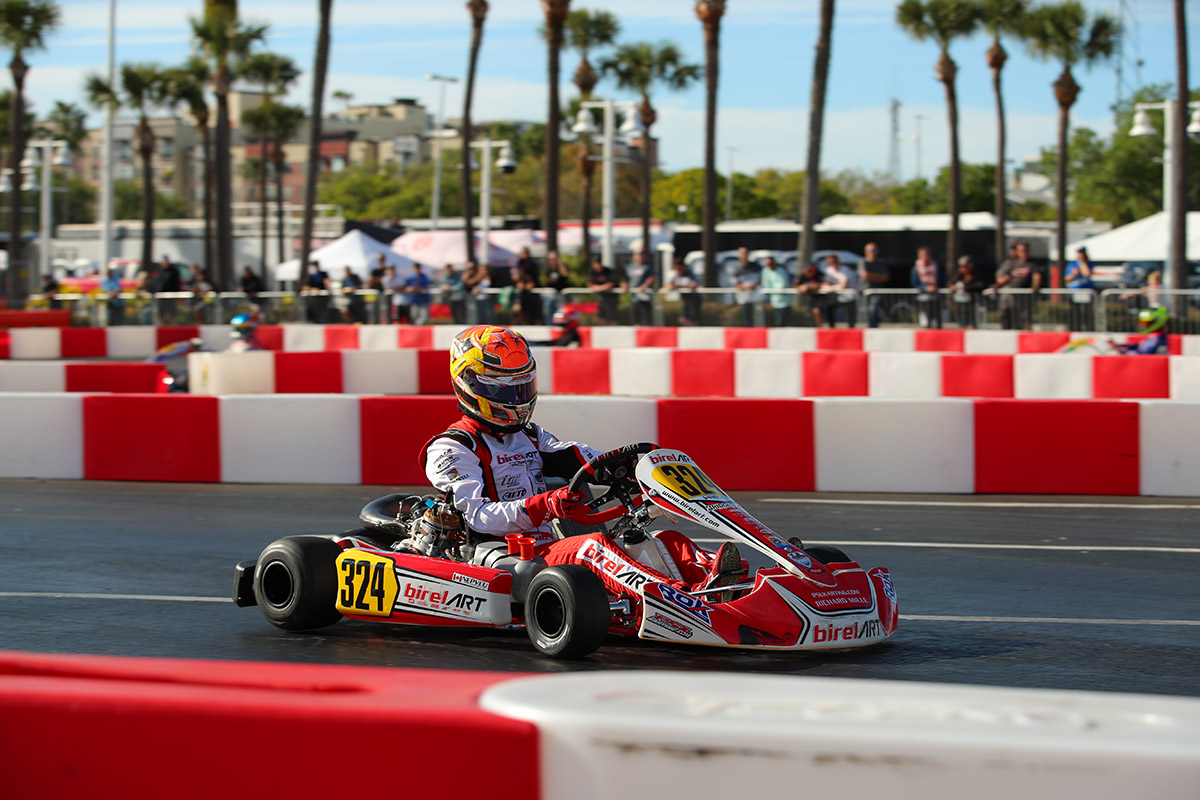 Claiming three championships, Birel ART North America has concluded the ROK Cup USA Florida Winter Tour. With Tropicana Field providing the backdrop for the final event weekend in St. Petersburg, pole positions, race wins and championship winning performances highlighted the weekend. With little time off and no time to go home, the Birel ART North America contingent is on track this weekend for the opening round of the Superkarts! USA (SKUSA) Pro Tour at NOLA Motorsports Park.

“It is a great way to close the series with some more wins and three championships,” expressed Dominic Labrecque. “We now shift our focus to the start of a new championship this weekend and see what we can do to get out front early.”

Caleb Gafrarar turned his fourth-place qualifying effort into a prefinal win before dominating the weekend’s main event to top the podium blocks. In his three Florida Winter Tour events, Gafrarar claimed two race wins and scored the most points of all Mini ROK drivers to be crowned the champion.

Following suit, Jordan Musser also scored a pair of main event victories and was looking to make it three for three heading into St. Pete, but contact on the opening lap and a damaged steering column reduced the double race winner’s speed as he had to settle for the second step of the podium after his pole position performance on Friday and prefinal win on Saturday afternoon. Musser was also crowned the 2020 Florida Winter Tour Shifter Master Champion.

It was a double podium performance for Birel ART North America in the 206 Junior class as pole position winner Mathieu Cousineau (Ben Cooper Racing) found his way to the second step of the podium with Laurent Legault (Ben Cooper Racing) in third. Putting three drivers in the top-five, Logan Ferguson (Prime Power Team) had a consistent weekend in fourth and added to the squad’s results tally. On the strength of his three Florida Winter Tour events, Cousineau was also named the 206 Junior Florida Winter Tour Champion.

Daniel Formal (ANSA Motorsports) and Jake French added top-five finishes in ROK Shifter with Formal claiming the Vice Championship. Steady all weekend long, Formal qualified second, had a strong set of heat races and finished second in the prefinal before just missing the win in the main event. French was able to improve in Sunday’s main event leveling up three positions from seventh to finish fourth.

A pair of strong runs were all for not by Micro ROK driver Illie Crisan (Ben Cooper Racing) and ROK Senior standout Thomas Nepveu. Crisan was in the top-five all weekend long qualifying in the second position and finishing fifth in the prefinal while Nepveu was sixth in Senior qualifying before going fourth in the prefinal. Both drivers failed to finish Championship Sunday’s main events due to contact but showed great pace throughout the weekend.

With the Florida Winter Tour now complete, several members of the Birel ART North America program made the trip to NOLA Motorsports Park for the start of the SKUSA Pro Tour. Stay tuned to social media pages for news, information, photos and results and follow your favorite Birel ART driver.

For more information to become part of the Birel ART, Ricciardo Kart or Charles Leclerc dealer networks or information on how to join the PSL Karting Race Team for the 2020 season, please contact Raphael@PSLKarting.com.