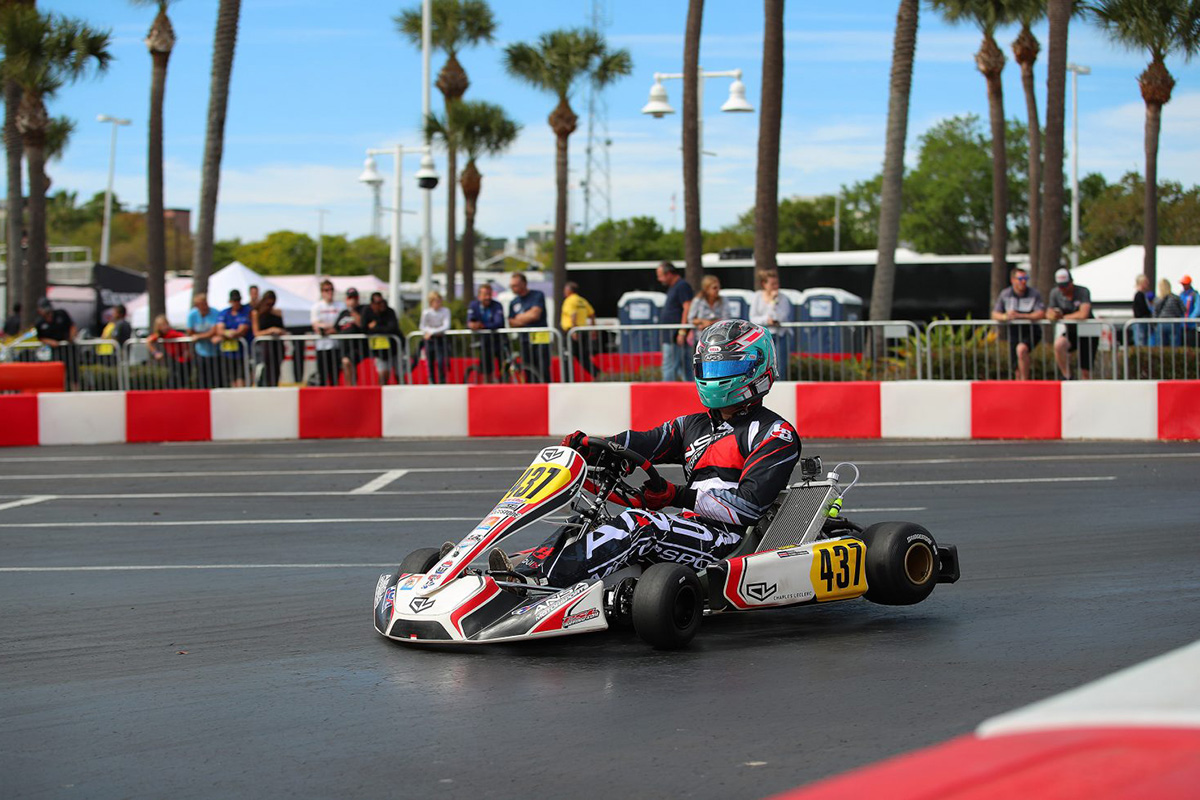 With one temporary circuit event already complete in 2020, the third and final round of the 2020 ROK Cup USA Florida Winter Tour is taking place this weekend at the Tropicana Field in St. Petersburg, Florida. One week prior to the start of the NTT IndyCar Series, St. Pete is the only place to be to see the future and current starts of motorsports in a ten-day span.

With drivers and teams getting acquainted with a newly sealed parking lot featuring transitions, bumps, fast corners and hard braking zones, four practice sessions on Thursday led into two more this morning. A short lunch break yielded time for a Drivers Meeting and the Dan Wheldon Ambassador Award presentation, which was given to GFC’s Gary Carlton, before qualifying and heat one commenced this afternoon. Providing a short circuit, fields were tight, and the racing was stellar for the first official on track day of competition.

Cousineau continued his momentum into the heat races taking the heat one win after on track winner Danny Dyszelski was docked two positions for a start line infraction relegating him to third. Ferguson made it a Canadian one – two with Laurent Legault (PSL Karting) and DaCosta closing their first wheel-to-wheel action in fourth and fifth.

Master ROK
Renato Jader-David (Orsolon Racing) took the ROK Masters pole position as he looks to put a stamp on his championship performance. Sylvain Coulombe (Premiere Karting) finished with a lap .323 in arrears of Jader-David as Michael Auriemma (Orsolon Racing) and Glauber Granero (VMotorsport) were third and fourth.

Just as he did in qualifying, Jader-David was on the top of the results sheet at the end of heat one taking a 2.318 second victory. Auriemma gained one position to make it an Orsolon Racing one – two while Coulombe finished third with Granero in fourth.

Warren moved to the top of the sheets when wheel-to-wheel action began, taking the 206 Senior heat race one. Polesitter Amundsen fell one position to finish second with Caseley in third as the top three were separated by .710. Kelsey Hann advanced forward one spot to finish fourth with Perkins coming home fifth.

Micro ROK
Salvador Dellavecchia (AM Engines) continued his front of the pack presence as the young driver was able to claim another 2020 pole position. Circulating the Tropicana Field facility in 42.648, Dellavecchia took the top honors ahead of Ilie Tristan-Crisan (PSL Karting). Oliver Wheldon (JC Karting) was the best of the rest in third as he looks to improve throughout the heat races while Vicente Garcia (AM Engines) and Kai Johnson (AKT) put themselves in the top-five.

Oliver Wheldon moved from third to first in heat one taking the victory and solidifying himself as a threat for the weekend win. Johnson gained three positions to end his first wheel-to-wheel action in second while Garcia gained one to finish third. Ilie Tristan-Crisan was able to secure the fourth position on track as Jordan DiLeo (Goodwood Kartways) made his way to the top-five to finish fifth.

Junior 100cc
Chloe Chambers (Mike Doty Racing) rose to the occasion in 100cc Junior qualifying as she was able to set the time to beat early and hang on until the end of the session. Multi-time race winner Connor Zilisch (Late Apex Karting) narrowly missed the top spot ending his session in third with Thomas Annunziata (Team Felon), Westin Workman (Timmy Tech), and Jorge Ortiz (Supertune) rounding out the top-five.

Thomas Annunziata passed a pair of karts in heat one to elevate himself to the front of the field as he held off a hard charging Connor Zilisch who attacked in the final corner of the last lap. Losing momentum and the second position to polesitter Chloe Chambers, Zilisch was back up to speed to finish third. Jorge Ortiz was with the lead trio early but fell back to finish a distant fourth while Sam Corry (Team Felon) drove from 11th to finish fifth.

Justin White took his first heat race win of the weekend as he beat Boos to the line by one second in the first of three heat races. Julia held on to finish second, while Altzman found his way to third. Ross Smith and Andy Miller flip flopped positions from qualifying as Smith ended his day in fourth while Miller was fifth. Following post-race penalties, Boos was back on top with the win ahead of White, Smith, Miller and Altzman as three of the four incurred on track infractions.

Jordan Musser continued his perfection scoring the heat one victory ahead of Martinelli. Bagheri was a victim of some first corner contact to fall down the running order to eventually retire from the race. Josh Lane took advantage of the situation and finished third while Hernando Sanchez (Goodwood Kartways) and Daniel Dibos (JC Karting) claimed the fourth and fifth positions.

Daniel Formal rocketed off the line from his P2 starting position to take the lead before the entry of corner one and never looked back. Formal took the heat race win ahead of Bujdoso while Austin Garrison (TB Kart) drove forward to third. Van der Steur closed his heat in fourth with Jake French (PSL Karting) in fifth.

Orjuela continued his winning ways in heat one setting the fastest lap of the race and driving to the victory. Ardiles moved from fifth to second on the results chart and brought his Supertune teammate Christian Quijano with him to finish third. Leonardo Escorpioni (U-Race) was able to cross the line in fourth as Salim Hanna (Team Montoya) finished fifth.

Senior ROK
In his quest for the championship, Luca Mars (Speed Concepts Racing) stole the Senior ROK pole position to continue his impressive performance from Ocala. Diego Ramos (HR Motorsports) was second with Aaron Benoit (U-Race) in third. Axel Cabrera (AKT) found himself in P4 at the end of the session with perennial front-runner Brandon Jarsocrak closing his session in fifth.

Diego Ramos garnered the heat one victory ahead Thomas Nepveu (PSL Karting) and Colin Warren (TB Kart USA), who had a tremendous drive forward gaining eight positions. Aaron Benoit took advantage of other misfortunes to finish fourth as Jenson Altzman (Ruthless Karting) rounded on the top-five. With contact throughout the opening lap, several of the front-runners were taken out of contention and will be forced to work through heats two, three and the prefinal in search of speed and results.

Heat one got off to a rough start as Jeffers had heavy contact and was forced into the barriers. Jace Park took the lead and looked to have the heat win in the bag until the last corner on the last lap when a lapped kart slowed his momentum. Zilisch took advantage of the situation and drove to the apex and by Park to take the lead and the win. Jeremy Fletcher (Team Benik) drove to an impressive P3 results while Alex Powell (AKT) and Carson Morgan (Supertune) finished fourth and fifth.

With the first wheel-to-wheel action of the weekend complete, Saturday will see two additional heat races with results setting up the grid for the day’s prefinal. Stay tuned to the ROK Cup USA social media pages for more news, photos, information and results by following @ROKCupUSA on Facebook, Twitter and Instagram.