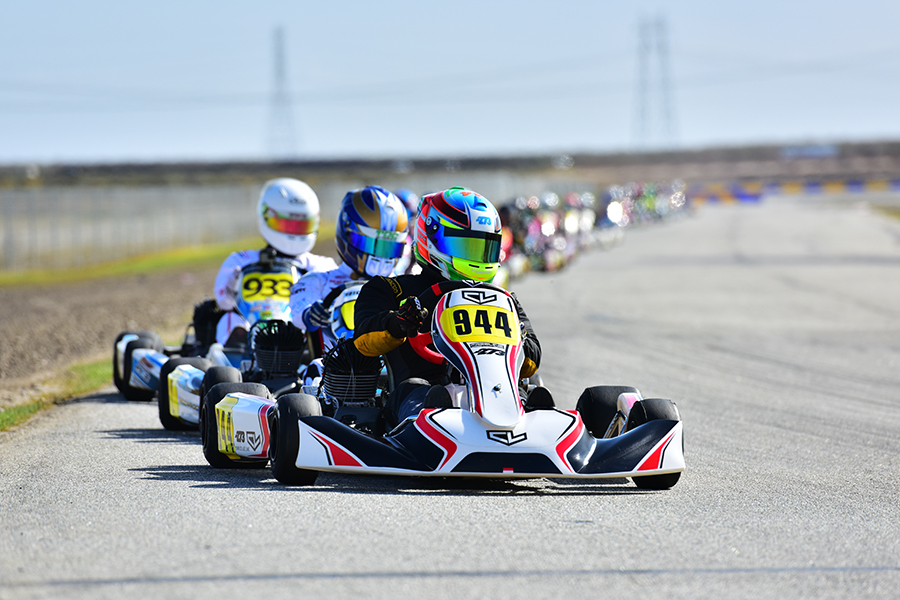 The 16th season of the ProKart Challenge kicked off this past weekend at the Buttonwillow Raceway Park. A perfect two days of weather on February 29 and March 1 greeted the competitors to the Buttonwillow, California facility, beginning the run for a piece of the ‘pie’ – a $120,000 prize package for the 2020 season. The opening round of the six-race championship program welcomed a number of first-time winners at the season opener.

A stacked field of 22 KA100 Senior drivers – the largest class of the weekend – included a great mix of new series competitors and SKUSA veterans. Dante Yu was able to record a sweep in his class debut. The former SKUSA Pro Tour championship podium finisher set fast time in qualifying with a 52.004-lap, edging out SKUSA Pro Tour National #2 plate holder Nick Ramirez and Derek Morton by a total of 74 thousandths. That was the closest anyone was to Dante for the remainder of the event. He went on to win the Prefinal by over three seconds, before leading all 22 laps in the Final for his first victory. Trey Brown closed the gap in the main event, finishing only nine-tenths back, with Michael Michoff setting fast lap of the race in his third place podium finish. Jacob Yesnick and Christopher Martin completed the top-five. 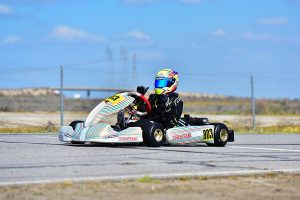 Racing was close in the KA100 Junior division all weekend long, welcoming a new class winner as well. PKC 2019 series vice-champion Ethan Lampe set the pace in qualifying in a session that saw three drivers within nine hundredths of a second. Enzo Deligny and Kyriakos Sioukas nearly took the fast time from Lampe in qualifying. Deligny jumped out to the lead and led all 12 laps of the Prefinal. However, the jump was too much. Enzo was penalized five seconds for a jump start at the green flag, dropping him to fourth and moving Sioukas – who ran fast laps of the race – to the win. That pace continued in the 22-lap Final, with Sioukas leading every lap and establishing a 6.5-second advantage at the checkered flag. Deligny climbed back to second, with Canadian Alex Berg joining them on the podium. Lampe ended the day in fourth, with Eli Mays placing fifth.

Lap times were very similar at the front all weekend in the KA100 Master class. PKC 2019 series champion Mike Smith set fast lap in qualifying, but was run down in the Prefinal by a charging Nick de Graaf – a winner at the 2019 Streets of Lancaster Grand Prix. It was de Graaf with the quick machine in the Prefinal, winning the race over Smith. The start of the Final saw Smith jump out to the lead before de Graaf reclaimed the position by lap five. From there, de Graaf ran away to an eight-second advantage in the 22-lap main event, his second career win in the category. Smith came under attack by Steven Jasinski, who was posting laps similar to that of de Graaf. Jasinski was just short at the checkered flag, unable to steal the second step of the podium from Smith. 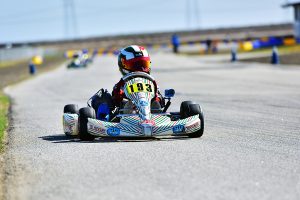 John Antonino put on a clinic in the Mini Swift category all weekend to earn his first victory in the class at the ProKart Challenge. The second-year driver outpaced the field by over half a second in qualifying, before winning the Prefinal by six seconds. The clean sweep on the weekend by Antonino was capped off by leading all 22 laps in the Final, winning with a 22-second gap over the fight for second – including five different drivers. The battle for the runner-up spot went down to the wire, with Tristan Young securing the spot ahead of Dominick Benites. Rocky Moran was one spot short of the podium in fourth, with Ryan Giannetta and Alex Mercado crossing the line close behind.

Tristan Murphy was another first-time winner on the weekend, earning maximum points in Micro Swift. Murphy finished the 2019 season fifth in the standings, with a best finish of third. The weekend in Buttonwillow saw no driver ahead of him, with Murphy sweeping each on-track session. Murphy secured the victory with a 15-second advantage after 20 laps in the Final. The rest of the field was static behind him, with Shea Aldrich second and Bronson Koustas in third. 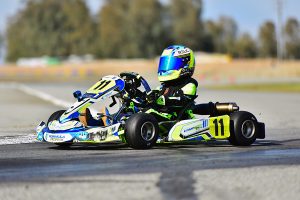 Four-time SKUSA SuperNationals winner Billy Musgrave came one spot short of the X30 Senior championship at the ProKart Challenge in 2019. Musgrave is on the right path to improve that position, earning a sweeping victory in Buttonwillow. He earned maximum points on the weekend to begin the 2020 title chase at the top, matching his win total from 2019 one round into the new season. Branden Underwood ran second, with Jonathan Golden classified in third.

While he came up short in the KA category, Mike Smith earned his first career victory in the X30 Master class. Smith, making his series start in the class, was able to win the Prefinal and Final for his first triumph. Top qualifier Ricardo Arruda ended up second, with Brandon Holly in third. 2019 SKUSA Pro Tour X30 Super Master vice-champion Steve Martin ran uncontested in the category, earning his first victory of the 2020 season. 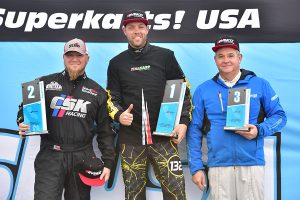 Nick de Graaf started out the 2020 season on the top step of the KA100 Master podium (Photo: Mad Moose Media)

The fight in X30 Junior was one of experience versus graduate. One side was 2019 series vice-champion Max Opalski, who won at the Streets of Lancaster Grand Prix last year. The other side was 2019 Mini Swift champion Jesus Vasquez Jr. making his first start in the category. Vasquez was able to get the advantage in qualifying, while Opalski controlled the front in the Prefinal. The two fought early in the Final until Vasquez emerged with the better pace, leading the second half of the 22-lap main event to earn victory in his class debut. Opalski slipped back to third late, with Kyriakos Sioukas advancing up to second.

2019 SKUSA Pro Tour Pro Shifter champion Kyle Wick made his first start at the ProKart Challenge in recent years, starting out the season with an unchallenged victory in Buttonwillow. It was the same for 2019 S3 series champion and Lancaster Scholarship winner Vicente Salas, who won in his debut in Pro Shifter 2. Salas earned maximum points in his first ProKart Challenge race in the category, winning by 1.5 seconds ahead of Conner Wick – brother of Kyle. Anthony Freese completed the podium. Carl Lewis was able to claim victory in G1, as PP Mastro paced the division throughout the weekend, only to retire early in the main event. 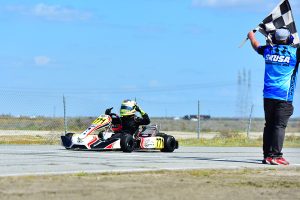 S5 Junior graduates Mathias Coito and Jacob Yesnick shined in the Shifter Senior class. Coito set fast time in qualifying, while Yesnick took over on Sunday, winning both the Prefinal and Final. Luca Bortone ended up second in the main event, dropping 2019 ProKart Challenge S5 champion Coito to third. Kailey Meris went winless in 2019 in S5 Junior, but earned her first victory in the category in Buttonwillow. Meris swept the weekend, winning the main event by 2.9 seconds ahead of Charlotte Cheung – with Ansel Baldovin third.

The ProKart Challenge resumes the 2020 season in a month on April 4-5 with a trip to the Pacific Ocean coastline. Round Two is set for the Monterey Bay Karters facility at the Marina Airport Kart Track in Marina, California – for quite possibly the last PKC race at this facility. 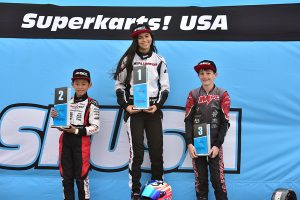 Kailey Meris landed on the top of the podium for the first time in S5 Junior (Photo: Mad Moose Media)

The focus now shifts to the 2020 season of the SKUSA Pro Tour, which begins in a week on March 13-15. Racers from all over the world will converge on the NOLA Motorsports facility in New Orleans, Louisiana, for the fourth edition of the SKUSA WinterNationals. Pre-registration for the event closes on March 8, and will open shortly for PKC Round 2 at Monterey.