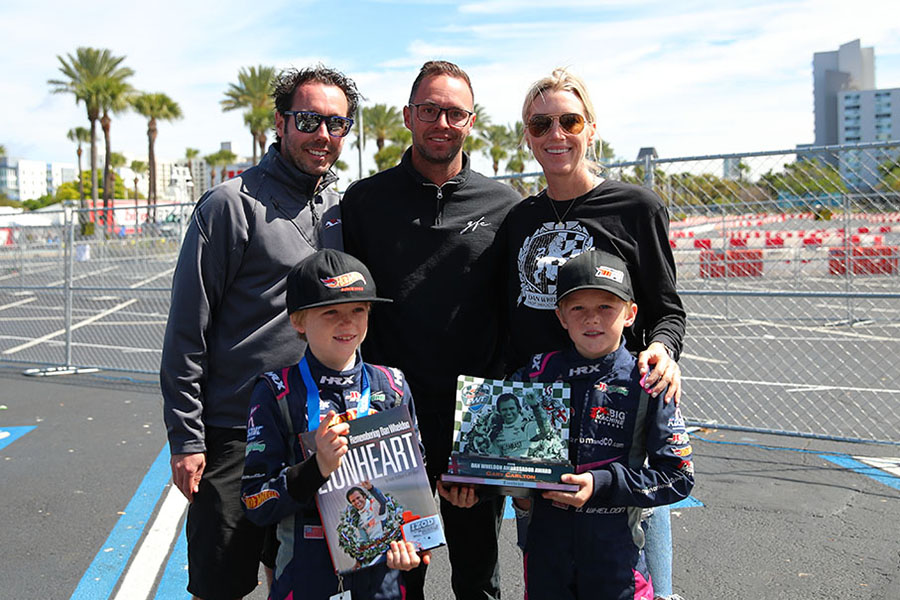 With the announcement that karting would take place in the Streets of St. Petersburg to close the annual 2020 Florida Winter Tour, it is fitting that the Dan Wheldon Karting Ambassador Award Presented by Bell Helmets returned to the popular winter series. Launched by Formula Kart Productions’ Bill Wright and continued by RTD Media and Management’s Mike Maurini, the 2020 Dan Wheldon Karting Ambassador Award Winner recipient simply needed to be a member of the karting industry, in general. Although drivers are the most prominent part of any series, success in karting requires groups of individuals including parents, tuners, mechanics, coaches, team managers, business owners, importers, track owners and event promoters.

Today, at the 2020 Florida Winter Tour finale event, the Dan Wheldon Ambassador Award was presented to Gary Carlton by Mike Maurini, along with Susie, Sebastian and Oliver Wheldon. The following was read during the award presentation:

To become a well-known name in karting, it takes time, effort and a work ethic that is second to none. The 2020 recipient of the Dan Wheldon Ambassador Award checks these three boxes and then some. Experiencing the highest of karting highs and the lowest of karting lows, the 2020 award winner has become a fixture in the North American karting community and entered a new role in the sport in recent years.

Having spent some time overseas as well as crisscrossing North America coaching and training drivers, tuning and wrenching on karts as well as competing himself, the 2020 Dan Wheldon Ambassador Award Winner has worked with some of today’s drivers who are at the pointy end of their career or on the rise to stardom such as Oliver Askew, Kyle Kirkwood and a new driver that will enter the car ranks next weekend. 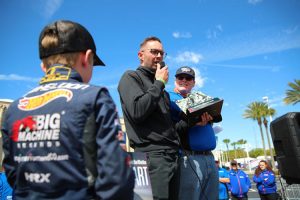 As one of the top shifter kart pilots from 2005 until 2017, the 2020 Dan Wheldon Ambassador Award Winner now spends his time with a stopwatch in hand, behind the screen of a data computer or in the shop late at night prepping for upcoming events. Living in Europe, he was forced to learn a new language to be able to communicate and made it part of his routine to ensure that he was one of the best. Though some think he is or was demanding and arrogant as a driver, looking back, we now know he just knew what he wanted and why. This can be seen now with both business and personal success.

In 2019 and onwards into 2020, this year’s award winner has been focused on his test program to make race weekends easier. When it rains and most people pack up and go home, this team owner grabs his rain jacket, bolts on rain tires and assists his drivers to help them learn and elevate their game. This winner has learned from some of the best in the sport including Mike Speed, been employed by a former Dan Wheldon Ambassador Award Winner in Ocala Gran Prix’s Jorge Arellano and has worked alongside industry greats such as Greg Bell as well as Fausto Vitolo from Trackmagic and Reine Pierson from SwedeTech. His name is quickly becoming synonymous with these top industry members.

In speaking with officials and series organizers, this person is always helpful, courteous and willing to lend a hand in a time of need.

The former driver and now team owner is the 2017 Florida Winter Tour ROK Shifter Champion and has claimed race wins and championships behind the wheel of Rotax, ICC, KZ2, and Hondas amongst other engine platforms proving that great drivers can win in any element. Claiming the 2018 ROK the RIO victory as a team owner in the ROK Shifter category, he is continuing his legacy in karting and feeding the youth of the sport with heart, motivation and a desire to win and that alone is something that makes him a worth recipient.

The easy way to do things in karting is to join one of the big three, buy a kart, start a team and win races, but this guy does it his way, not the easy way. Having your initials inscribed on a chassis and putting your reputation on the line is something that most in this sport will not do. Gary Carlton has done this and while the Micro and Mini drivers are the future of the sport, Gary is a future business leader of the sport and we all know that Dan would be proud of him.