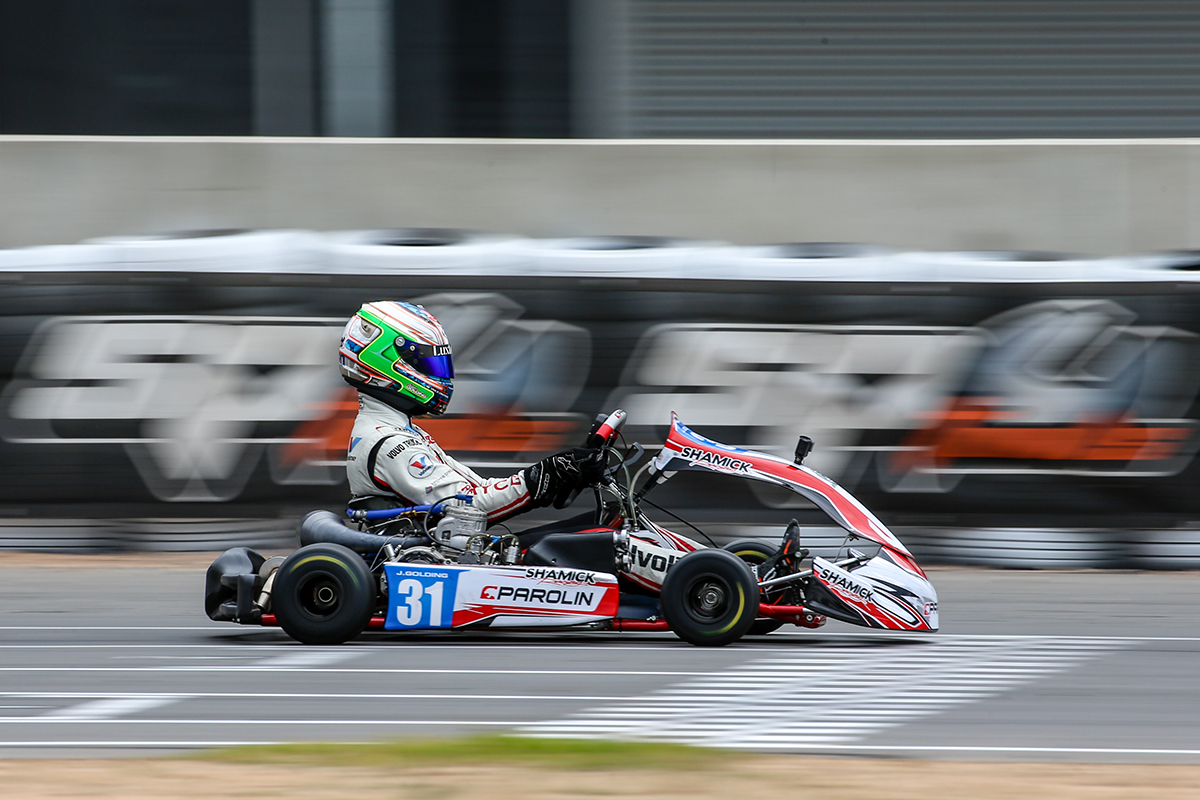 Virgin Australia Supercars Championship regular, James Golding has delivered one of the great upsets in the SP Tools Australian Kart Championship opening round at The Bend Motorsport Park, presented by Castrol EDGE, by taking a stunning victory in the KZ2 category on Sunday.

The weekend to that point had been dominated by Ricciardo Kart’s Troy Loeskow who had a perfect score in his Title defence. Loeskow elected to take the outside starting position for the 25-Lap Final.

Golding’s starts had been electric all weekend and proved to be once again in the Final – using the inside line of the front row to tremendous advantage. He got the best of the start, while Loeskow got swallowed up in the opening lap jostling, dropping back as low as sixth.

Driving a Parolin chassis, Golding had a scare at the end of lap one when he lost grip going through turn one – he was the pioneer after light sprinkles had befallen the Tailem Bend track located around one hour’s drive from Adelaide.

He dropped to second behind CRG’s Zac Zamprogno, while Loeskow was plotting his charge forward. Golding, once re-assuming the lead was able to open a sizeable margin as a battle for the ages started to form for the minor placings.

At one stage, BirelART’s Chris Hays – who was celebrating his Championship record 50th KZ2 round start – was up to third and it looked as though a fairytale finish may have been on the cards for him. Nonetheless, Loeskow got his Vortex powered machine hooked up and started picking his way through. He was quickly into third position and then passed KZ2 debutant, Reece Cohen (JC Kart) to move into second.

He was two seconds behind Golding with 10 laps remaining and started his charge, pulling tenths of seconds out of Golding per lap.

Loeskow wasn’t expecting a challenge from his young team-mate, Jac Preston who was in his first KZ2 race for Ricciardo Kart. Preston caught up to and passed the Aussie Champion, which then started an inter-team battle over the final laps of the race, Loeskow trying to pressure the 16-year-old into a mistake.

All this helped Golding who sailed to a famous victory in the end and got his 2020 SP Tools Australian Kart Championship campaign off to a fine start. Preston held on for second and Brisbane-based Bundaberg product Loeskow came home in third position, salvaging a high amount of points to add to his maximum qualifying and heat race scores.

The elite Junior category, KA2 went down a similar path after a frenetic opening few laps. The EVOKart duo of Adrian Haak and Jimmy Pisczyk pulled away from the field, while all hell was breaking loose behind, including one of the front-runners from throughout the weekend, Cody Maynes-Rutty finding his PCR in the mid-pack after being involved in a two karts, one space situation.

Another to fight his way forward was Hugh Barter. Ricciardo Kart’s big off-season signing was mired in the pack then pushed forward to be on racing terms with the leading duo. Barter steeled himself to get by Pisczyk and then set sail for Haak. Barter’s pace was impressive and after catching Haak, the Sydney-sider had no choice but to yield to Barter who went on to claim his first KA2 round victory.

Finishing fourth was JC Sport’s Oscar Targett. Remarkably, the Gold Coaster was almost ruled out after an incident in a heat race on Saturday afternoon. He was given a medical all clear in the early hours of Sunday morning. After being in hospital for observation he was given a clearance and able to take part, pulling off a stunning performance in the final this afternoon.

TaG 125 had one of the more mind-bending finishes to an AKC final in the sport’s history.

A battle for the lead late in the race between Brendan Nelson and Cody Brewczynski ended in tears with the pair colliding on multiple occasions, this allowed TF Race Engines driver, Tyler Howard through to the lead, of which he had a decent margin. Coming onto the start-finish straight Howard miscued the number of laps remaining and celebrated victory, however there was a lap to go.

While cruising to what he thought would be a celebration, Howard was soon gobbled up by the field, opening the door for Sydney-sider Taylor Hazard through to take his maiden AKC victory for Top Gun Driving Academy.

Defending Champion, Adam Lindstrom fought from mid-pack to come home in second position in his Pro Karting Formula K, while Kiwi Jackson Rooney came from deep in the pack to record a podium finish in third.

Nelson came home fourth and Brewczynski 14th in what is going to be a fascinating season.

Jaiden Pope’s dominance in X30 for Rush Performance continued as he took a comfortable victory in the final, backing up his pace from throughout the weekend.

Pope took an easy victory while it was all going on behind.

Up to 10 competitors had their chance to make the podium, however ultimately, the podium fell the way of young Sydney-sider, Jackson Souslin-Harlow who edged his Arrow by Parolin’s Harrison Hoey late in the race.

Hoey survived a late race charge from defending Champion, Bradley Jenner to claim the final podium position. Jordi Marcon fired through from near the back of the pack to finish an exemplary sixth after what had been a challenging weekend for the Queenslander that saw him qualify 40th following a mechanical issue.

Oscar Priest’s good form over recent times in KA3 Senior continued by taking a hard fought victory in the first final conducted at the Bend for an AKC round. The Boost Mobile backed racer edged past a number of competitors to take a narrow win. Second went to Benito Montalbano, whose move to the AWC Motorsport Academy this season has immediately yielded dividends. Jai Brown completed the podium in his JC Sport Parolin. Fittingly, the trio were the cream of the crop throughout the weekend in the category.

Hayden Crossland took his first AKC round win in KA4 Junior in his PCR chassis.

Crossland was at the point for much of the 16-lap final and emerged victorious. Second place went to Energy Corse’s Jesse Lacey who seemed to get a handle on the KA4 style as the weekend wore on after stepping up from Cadet 12 at the end of last year and the podium was completed by Sera Driver Development pilot, Marcus Pisani.

Alex Ninovich, who was slated to start on the second row of the grid, ended the first lap in last position. Expected to be a Championship front-runner, which he proved in heat racing, he pushed forward and ultimately ended up with a sixth place position keeping his Championship well and truly alive.

Cadet 12 was one of the all time classic races in Australian karting history and will go down in folklore. Anyone of 15 drivers had their chance to win the final and the lead changes were so frequent they were impossible to keep up with.

Ultimately though, Lincoln Taylor, who had Dunlop Super2 Series front-runner, Brodie Kostecki in his corner got an incredibly narrow win – his first in the Championship with Patrizicorse driver, Mika Lemasurier getting an unlikely second place. JC Sport’s Ryan Macmillan survived for a third placed finish. Front row starter, Cadel Ambrose got pushed well wide at turn one from the start and re-joined the circuit in last position, giving at least a 10 metre headstart to his closest rival. He then pushed forth to come home ninth. Joining him in one of the play of the day drives was Lewis Francis who started on the last row of the grid and finished 10th.

In Cadet 9, William Calleja capped a terrific weekend with victory in the youngest category of AKC racing. He took a commanding victory in the end for Sera Driver Development.

Basilio Micale was able to come home in second placing after a big battle for the minors, edging home in front of Noah Enright and Maxim Kerwin.

The next round of the SP Tools Australian Kart Championship, presented by Castrol EDGE will take place April 17-19 at the Eastern Lions Kart Club (Puckapunyal), Seymour, Victoria.