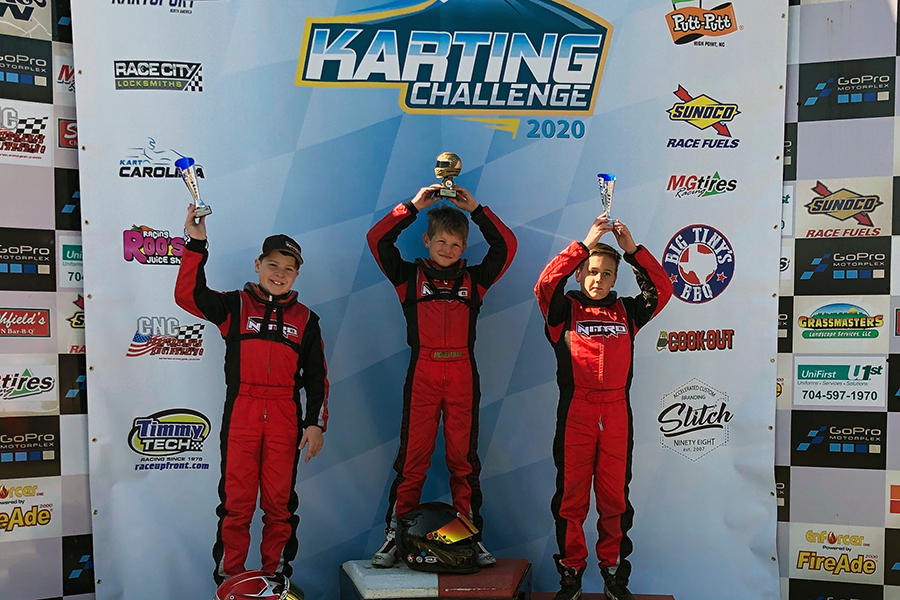 Back on scene, Team Nitro Kart picked up the 2020 season right where they left off. The team took on the season opener of the Karting Challenge series hosted by GoPro Motorplex head on, grabbing 4 wins, 3 seconds, 8 thirds, and multiple top-5 finishes. Nitro Kart dominated the Briggs LO206 divisions scoring wins in 3 out of 4 classes. All three winning Briggs karts were Nitro’s newest addition to the chassis family, “The Lefty”.

“The Lefty” is a Nitro Kart special chassis that features the motor on the left side of the kart. The kart’s performance is increased with a lower CG as the engine no longer has to be tilted forward to clear the right rear tire. You can find that the safety increases, as the driver is no longer sitting inches from the chain and sprocket. An additional feature of this chassis is the maintenance and tuning ability, due to the engine being on the left side the ability to make changes to the sprocket and clutch are at a much easier access point.

This weekend found Nitro’s own, Nick Tucker and Ashley Rogero returning to the seat to show their team just what could be done with the new chassis. With the way the series schedule was split, the team duo found that they can race the same kart during different parts of the day. Tucker was entered in the Briggs LO206 Heavy division, which meant he would be completing all of his races for the day in the early morning sessions. Rogero was entered in the Briggs LO206 Senior division which took place in the afternoon. Tucker showed incredible speed right out of the gate, as he was never outside of the top 5 in any action that took place on track. Tucker was able to get to the lead with two laps to go and never looked backed. When he crossed the line, he found his margin of victory to be one full second over the second-place competitor. After Tucker dominated in his Briggs Heavy final, the team new the kart was dialed in for Rogero to take on next. 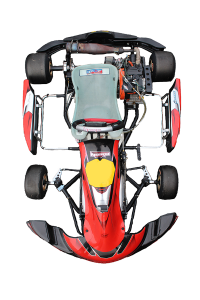 The led went on, the gear went up, and the kart was on the grid ready to roll for Rogero. She jumped in the new Nitro Lefty never having raced a 4-cycle kart ever before. A crazy first lap took Rogero from the lead, to 7th all within a matter of one corner. She was able rebound and lead 7 of the 15 laps. Crossing the finish line her margin of victory was a stretched 0.7 of a second to the second-place finisher.

Christopher McKeithan was the third Nitro team member to score a win in the Briggs division. The battle was close between teammates, Spencer Conrad and McKeithan throughout the entire race. Last season showed a true battle royal between these two for the entire season. Swapping positions constantly, it is always a toss-up who is going win when they cross the finish line. A last lap battle led McKeithan to score the victory over Conrad by a mere 0.049 of a second. Great battles arose throughout the entire class as we saw Jared Clarke manage a top-5 finish, Jason Noe, J.J. O’Neil, and Joshua Kline all grab top-10 finishes on their Nitro karts.

IAME Swift put on a great show as we again saw a great battle between Nitro drivers, Spencer Conrad, Christopher McKeithan, and Ayden Patty. The three young athletes made it a race to watch as they diced it up all race long. Conrad found the lead from lap 10 and was able to hang on until the drop of the checkered. McKeithan and Patty were battling it out all the way to the stripe, as McKeithan nudged out Patty by 0.15 of a second at the line for second place.

Team Nitro will now get to enjoy a two-week rest period before heading out to NOLA for the kickoff of the SKUSA Pro Tour series. For more information about joining team Nitro, tent support, or transportation services, please contact Nick Tucker @ 704.818.7868 or via email kartworxracing@gmail.com.