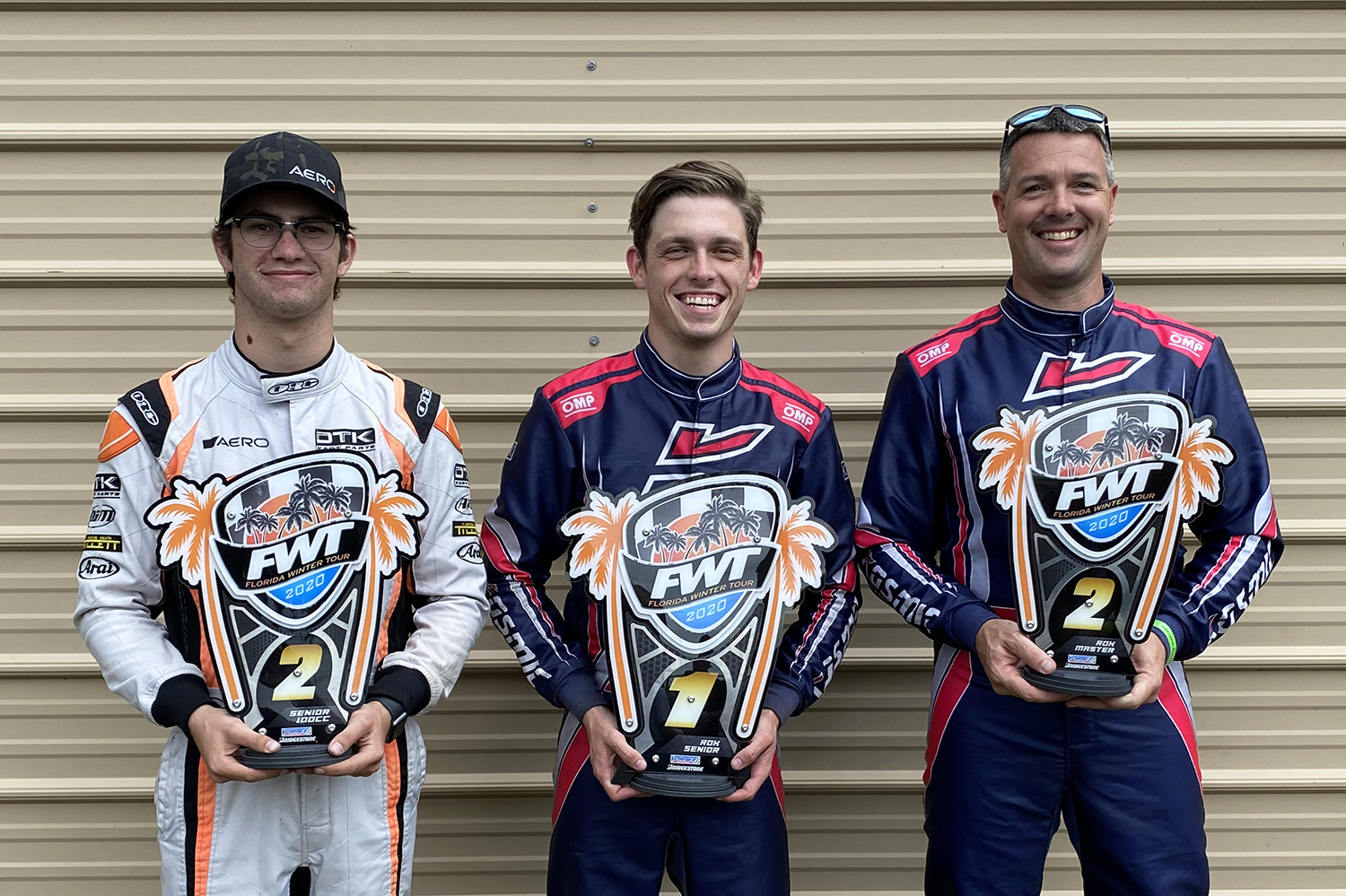 Fresh off championships and victories at the Superkarts! USA Winter Tour in southern Florida, the Rolison Performance Group hauled north to the Ocala Gran Prix facility for the second stop of the ROK Cup USA Florida Winter Tour. The February 14-16 weekend was the second round of the prestigious program, taking on the ‘bullring’ that is the 6/10-mile course in Ocala, Florida. A total of seven drivers competed in four divisions, recording three podium finishes in three categories, including the first victory of 2020 at the program.

Ryan Norberg rolled into Ocala with the momentum of a second straight SKUSA Winter Series championship the previous weekend. The four-time SKUSA Pro Tour title winner was among the top-five in the Senior ROK division all weekend. The only blemish was the opening heat race when a number of drivers, including the RPG contingent, missed the grid time for changing weather conditions and selection of wet or dry tires. When the three heats were completed, Norberg was 11th in the standings. The Florida native improved eight positions aboard his RPG Kosmic in the 18-lap Prefinal to start the main event in third spot. Norberg took the lead on lap 12 of the Final, and remained in the lead until the checkered flag, pulling out to a 2.1-second advantage for his first victory of the 2020 season.

“Victories help build momentum,” stated Rolison Performance Group owner Mike Rolison. “Ryan went winless at the SKUSA Winter Series yet captured the title. It motivated him to come out strong at a track he knows very well. This victory will help carry momentum into our upcoming events and start that drive for the Superkarts! USA Pro Tour championship in 2020.”

It was a solid performance for all three RPG drivers in the Senior ROK field, producing three top-10 finishes. Bryson Morris and Jacob Gulick were 18th and 19th respectively after the heat races, and improved in both the Prefinal and Final. Gulick worked into the top-10 and ended up finishing seventh overall. Morris, making his first Florida Winter Tour start, improved nine positions in the main event to end up ninth.

“Anytime we can put multiple drivers into the top-10 is a win for us,” added Rolison. “Bryson is making great strides in his first two months at the Senior level, and Gulick continues to show speed everywhere we go. Their performances illustrate the strength we have no matter the engine package or tire compound.”

Jenson Altzman joined RPG on the weekend in a cooperation effort with Ruthless Karting, competing in the Senior ROK and Senior 100cc division. While the results did not fair positive for Altzman in Senior ROK, he was able to finish top-three in all on-track sessions in Senior 100cc. Jenson started the main event in the third position, and challenged for the lead throughout the 26-lap event. Altzman crossed the line in the second spot, earning his second-straight runner-up finish at the Florida Winter Tour.

“It was great working with Jenson throughout the weekend,” Rolison continued. “We have worked with other teams before, be it on the west coast or the east coast where logistics make sense. He has been a longtime competitor that we have watched over the years and we’re happy to help guide him to another podium finish at the Florida Winter Tour.”

The third podium of the weekend came via team owner Mike Rolison. The RPG owner jumped behind the wheel for the first time of the 2020 season, competing in the Master ROK category. Rolison ran top-three aboard his Kosmic machine throughout the weekend, earning a win in Heat #3. After claiming the win on-track in the Prefinal, Rolison was penalized for a start infraction, dropping him down to third on the grid for the Final. Mike finished the 26-lap main event in the second position, landing on the podium in his 2020 debut.

Scott Falcone joined him in the Master ROK category, improving on his point total for the class standings with a sixth-place finish. Falcone was just outside the top-five throughout the heat races, but fell back to ninth in the Prefinal. He advanced three spots in the Final to close out the weekend in Ocala. Kyle Wick rounded out the driver roster for RPG on the weekend, competing in the Shifter ROK division. Wick was fighting to break into the top-five through the heat races, improving from a 12th in qualifying to end up sixth on the Prefinal grid. He fell five spots in the race to end up inside row six for the Final. Wick only advanced one position to ninth in the main event, running lap times similar to the leaders.

The Rolison Performance Group hauler has made its way from the east coast to the west coast, traveling to Buttonwillow, California for the upcoming California ProKart Challenge scheduled on February 29-March 1. RPG completed was there this past weekend, completing a full test program and welcoming new drivers under the tent. Following that, RPG turns its attention to the opening event of the Superkarts! USA Pro Tour with the WinterNationals at the NOLA Motorsports facility in New Orleans on March 13-15.

Rolison concluded, “It was great to get out there and compete for the first time this year. I’ve never raced at Ocala and it was the perfect opportunity to help bring another voice into our debriefs after each session, to not only help Scott but the rest of the drivers under the tent. Victory was the goal however we came up just short. I hope to be back in the seat again soon as there are some great Master drivers in North America competing coast-to-coast. Thank you to all the mechanics, coaches and family for our back-to-back weekends, and the transport drivers who safely made the cross-country trip.”

The Rolison Performance Group is a leading race team and prep shop in American karting. Owner Mike Rolison, known as “Roli” at the racetrack, has built a career coaching some of the best kart racers on the West Coast. Over the past decade, he has helped 100′s of drivers and mechanics improve their craft. Mike brings world class driving and coaching experience to every racer he works with. Drivers who have been part of the Rolison Performance Group team over the past few seasons have recorded several national victories, claiming Superkarts! USA Pro Tour and Challenge of the Americas titles. RPG provides trackside support and arrive-and-drive programs for many series and events throughout the season. The team is a Kosmic chassis and product line dealer and is proud to campaign karts on the regional and national stage.