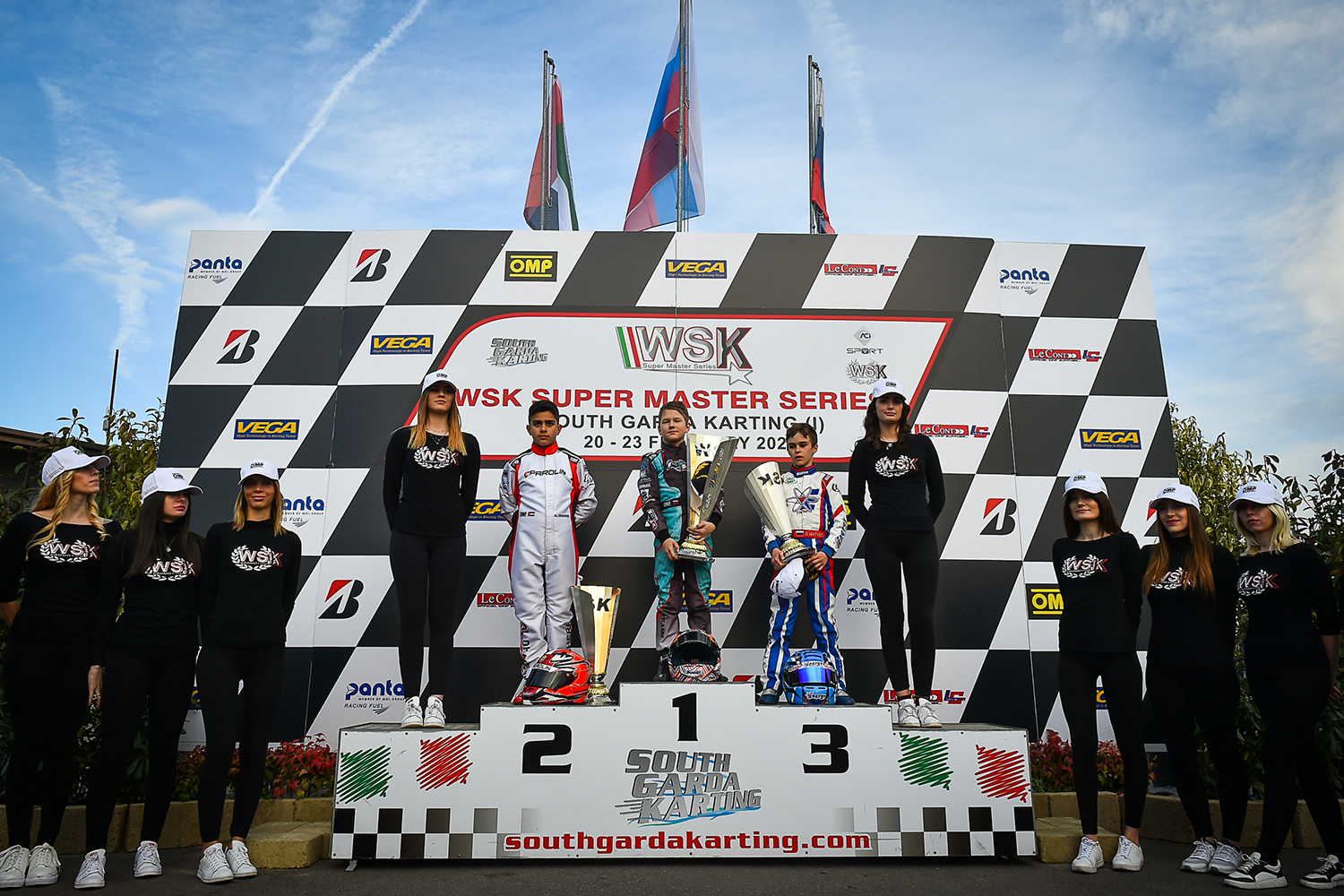 A great karting spectacle has taken place at the South Garda Karting Circuit of Lonato at the second round of the WSK Super Master Series. Three intense racing days featured 50 heats and 8 prefinals for the four entitled categories before the finals named the winners of this exciting weekend. The victories eventually went to Giuseppe Palomba (BirelArt-TM Racing-Vega/BirelArt Racing Team) in KZ2,to the Brit Joe Turney (Tony Kart-Vortex-Bridgestone/Tony Kart Racing Team) in OK, to Arvid Lindblad (KR-Iame-Vega/KR Motorsport) in OK-Junior, while the Russian Gerasim Skulanov (IPK-TM Racing-Vega/Formula K) was the only one to repeat the victory scored in Adria on February 2nd in Mini.

Giuseppe Palomba dominates the KZ2 final after an incident at the first start.

In KZ2, an incident at the first lap involved several drivers among which poleman Giuseppe Palomba scattato and caused the red flagging of the race. The Italian driver of BirelArt managed anyway to get the lead of the race at the second start and had the upper hand on his teammate Alex Irlando, who also started from the first row. Palomba dominated the final without any problems and crossed the finish line on top, while Fabian Federer (Maranello-TM Racing/SRP Racing Team) was second proceeding Irlando. The Swede Douglas Lundberg (Lenzokart-TM Racing/Novalux Racing Team) was also among the front-runners and ended fourth, while the French Jeremy Iglesias (Formula K-TM Racing/Formula K) was fifth. Riccardo Longhi —  Palomba and Irlando’s teammate — had a troubled weekend and was involved in several incidents after a great start. He eventually ended tenth due also to a penalty. He managed to end before another early protagonist of the weekend in Lonato, the Finn Simo Puhakka (Tony Kart-Vortex), who accused some delay in the heats. Home hero Giacomo Pollini (Formula K-TM Racing/NGM Motorsport) could not take part in the final as he was involved in an incident with a lapped driver in the Prefinal.

In OK Joe Turney bounces back from Adria.

The Brit Joe Turney (Tony Kart-Vortex-Bridgestone/Tony Kart Racing Team) managed to bounce back from the race in Adria where he came sixth in OK. Turney put in a good race in Lonato and recovered from the third row of the starting grid up to the victory. He led his teammate from Spain Pedro Hiltbrand, who won in Adria, and completed a great comeback race here. The third step of the podium went to the young Andrea Kimi Antonelli (KR-Iame/KR Motorsport), who managed to get the lead early on. Antonelli won the sprint to the line with the Brit Taylor Barnard (KR-Iame/Rosberg Racing Academy), while the Russian Kirill Smal (Energy-TM Racing/Energy Corse) was fifth. Luigi Coluccio (Kosmic-Vortex/Kosmic Racing)put in a great first part of the race but then ended sixth.

Arvid Lindblad wins the challenge with his teammates in OK-Junior.

The British driver Arvid Lindblad (KR-Iame/KR Motorsport) had to wait a few laps of the final before coming to the fore and taking a solid win in OK-Junior. Both his teammates tried to challenge the Brit, the Czech Igor Cepil at the beginning and then Brando Badoer. Badoer eventually claimed P2 and secured his maiden podium in Junior, while Cepil ended third. The fourth and fifth place went to the two Poles Tymoteusz Kucharczyk (RK-TM Racing/BirelArt Racing) and Karol Pasiewicz (Tony Kart-Vortex-Tony Kart Racing Team). The winner of Adria Alfio Andrea Spina (KR-Iame/KR Motorsport) was only fifteenth as he ended lap one behind before being penalized.