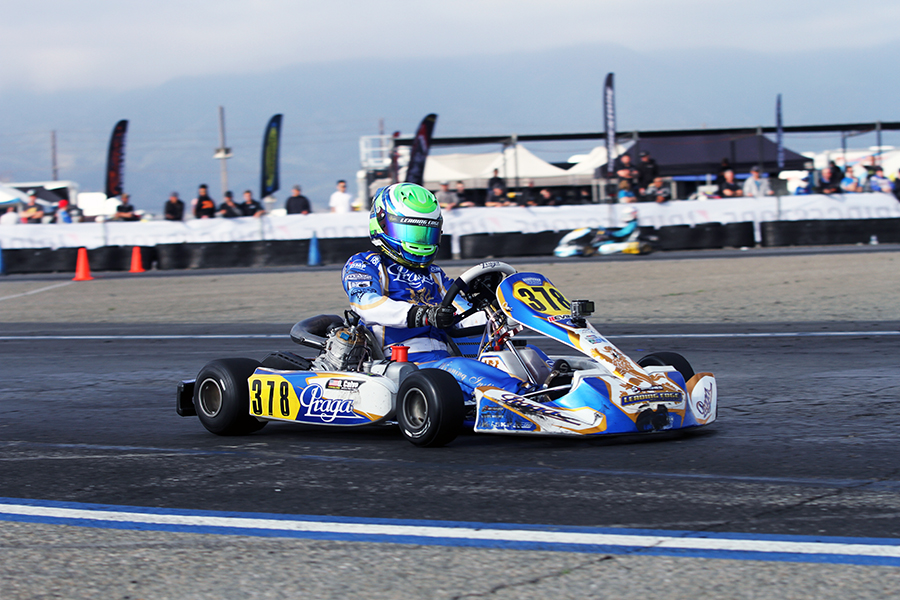 Three victories on the weekend for Oliver Calvo once again - two in Senior 100cc and one in Senior ROK (Photo: EKN)

The ROK Cup USA Challenge of the Americas completed the second stop of the 2020 season on Sunday at the CalSpeed Karting facility with a record turnout of 141 entries on the weekend. Sunday brought on early wet conditions with a passing shower before karts hit the track early for warm-ups, and eventually dried out and ended with sunshine before it dipped below the horizon and the final main events were contested in dusk conditions.

The Fontana, California facility sits outside the Auto Club Speedway and with that come unique procedures regarding ambulances. The on-site rig must take the patient to the medical center, check person in, and return back to the track before racing can continue. A late red flag for a minor injury that included a transport to the hospital ended the day early with three main events yet to run on Saturday. Those main events were transferred over to Sunday morning, with warm-ups starting at 7:30am and the three Finals completed for Round Three after that. After a brief driver’s meeting, Round Four began with qualifying, a small lunch, Prefinal and Finals. 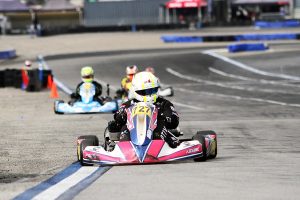 Mike Smith doubled up on the weekend in Master 100cc (Photo: EKN)

The ‘Grande’ course was wet throughout warm-up and the opening Final from Round Three. The second main event went from wet to dry, making another dramatic end with changing track conditions. The rest of the day was dry, and sunshine hit the area for the main events thankfully. Another transport to the medical center was done following the sixth main event of Round Four. After the delay for the ambulance to return, the final two races were conducted as the sun set and dusk hit the area in two shortened Finals. 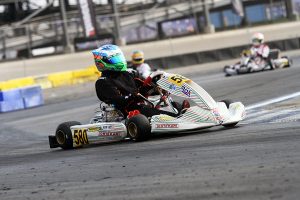 The Senior 100cc Final for Round Three brought great drama to open up the day’s action. The track was still wet and four drivers in the field gambled with wet tires while the rest went out on dry Bridgestone compounds. Jackson Dunn (FDM / CompKart) jumped out to the lead with rain tires, and established a solid lead. Those on the dry tires struggled for the first five circuits until the track surface provided the opportunity for the pace to increase while those with rain tires were hanging on. Eddie Shimmon (GFV) held his ground with the wet tire drivers on his slicks, and by lap six began to reel in three drivers ahead of him on wet tires. It took him until lap 14 to catch and pass Dunn for the lead, meanwhile, championship leader Oliver Calvo (LEM / Praga) was advancing his way from 10th at the start and closing in on the top two. Dunn and Shimmon fighting allowed Calvo to close up right on them, and on lap 15 take the lead. Micah Hendricks (Aluminos) and Alex Siragusa (FW / CompKart) joined the fight in the final laps. A wild last few corners saw Calvo emerge as the victor, earning a third straight. Hendricks took advantage of contact between Siragusa and Shimmon to claim second. Siragusa crossed the line in third with Shimmon fourth. Dunn was able to hold on to fifth, first driver with rain tires on.

Shifter ROK saw two drivers lead in the Round Three main event, Prefinal winner Race Liberante (J3 / CompKart) and Jake French (FGM / Birel ART). Liberante was pressured by French the entire opening 10 laps, until a carburetor issue put him on the sidelines. This gave the lead to French, and he pulled away to 5.8-second advantage. GFC teammates fought for the final podium positions with Kol Bailey (GFC) earning his first runner-up finish of the season. Top qualifier Cole Shade (GFC) crossed the line in third, but was put back to fifth in the final results, promoting Brenden Ruzbarsky (GFC) to third and William Ferguson (SSM / Exprit) to fourth. Championship leader Hunter Pickett (GFC) suffered a mechanical in the Prefinal and came from the back of the 27-kart field to finish seventh in the 16-lap race. 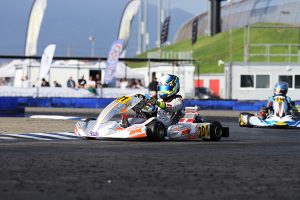 The opening categories for Round Four finished the same on Sunday as they did on Saturday. Alex Berg (RPM / Tony Kart) swept the action in the Junior 100cc to continue his perfect streak that began in Tucson. Berg drove to a 8.6-second advantage in the 20-lap Final over Jacob Hoover (Birel ART). Hallie Schroeder (Ruthless / Tony Kart) beat brother Cole Schroeder (Ruthless / Tony Kart) for the final step of the podium. Mike Smith (HRT / Kosmic) was challenged early in the Master 100cc main event after dropping to second for a brief moment before returning to the lead. Smith completed the sweep on the day, earning a second victory on the weekend by four seconds. Adam Kasick (HRT / Kosmic) held off Nick de Graaf (MMK / Italkart) for second with Jonathan Silva (FW / CompKart) right there in fourth. Tim Meyer (HRT / Kosmic) was fifth.

A fourth different driver earned a main event victory in Shifter Master ROK on the season. Jason Campbell (GFC) appeared to be that driver, setting fast time in qualifying and winning the Prefinal. First time COTA driver Ryan Yop (Tony Kart) made a late charge but came up short. The pace continued over to the main event, grabbing the lead from Campball on lap four, and holding on the rest of the way to earn his first COTA victory. Campbell was a comfortable second with Thomas Contino (VemmeKart) winning the tough battle for third. Kalvin Chen (FKC / Italkart) was fourth with Adrian Young (CRG) in fifth. Saturday winner Neil Joseph (Cameron / CRG) drove from the tail of the 22-driver field after a DNS in the Prefinal, climbing up to ninth with fast laps of the 20-lap race. 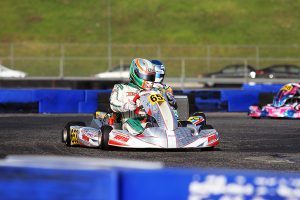 Adam Dowler made a statement with a sweep of Sunday’s action in Master ROK (Photo: EKN)

The Senior ROK division nearly welcomed a fourth different winner on the season. Jenson Altzman (Ruthless / Exprit) found speed overnight and was quickest in qualifying. He nearly won the Prefinal, only to slip back to third behind Tucson winners Oliver Calvo (LEM / Praga) and Jake Drew (CompKart). A wild opening corner dropped Drew down to seventh and Calvo to 10th, as Altzman jumped out to solid lead. Joey Brienza (Nash / FA Kart) eventually was able to move to second and ran down Altzman toward the second half of the race. As he closed, so did Calvo, who charged his way through the field with fast laps of the race. On the final circuit, the trio went scrambled for position with Calvo coming away with the lead. Altzman crossed the line second with Brienza third and Edward Portz (Nash / FA Kart) right there. A penalty for cutting the track in the final corner by Brienza took him off the podium, dropping him to sixth and moving Portz to third. That also promoted Drew to fourth and Jonathon Portz (Nash / FA Kart) to fifth.

One of the quickest drivers all weekend in Junior ROK was Max Opalski (RPM / Tony Kart). An issue in the main event on Saturday took a possible sweep away. Sunday, Opalski completed the sweep to become the third different new winner in the category. Opalski set fast time in qualifying and won the Prefinal. He jumped out to the lead and set the pace all 20 circuits, establishing a 2.8-second advantage at the checkered flag. Macy Williams (CBM / FA Kart) put in her best performance of the season with a runner-up, beating Alex Berg (RPM / Tony Kart). Enzo Deligny (RPM / Tony Kart) and Diego LaRoque (BBR / Tony Kart) completed the top-five. Two-time winner Frankie Mossman (Nash / FA Kart) spun in the early laps, falling to the tail of the field but posted fast laps of the race to climb back to ninth. 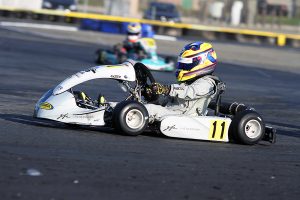 Adam Dowler (RPM / Tony Kart) claimed his first COTA victory in the Master ROK division, performing a sweep in Round Four. Dowler set fast time in qualifying and checked out in the Prefinal. In the Final, two-time winner Derek Wang (BBR / FA Kart) and Tucson winner Billy Cleavelin (RPG / Kosmic) put on the pressure. Dowler never flinched, leading all 20 laps to be come the third different winner in the category for 2020. Wang and Cleavelin completed the podium with Nick de Graaf (VemmeKart) fourth and Erik Jackson (JHM / Tony Kart) fifth.

Parker Delong (VLR) added his name to the list of winners in Mini ROK. Delong was able to take over in the Prefinal after loosing a chain in qualifying. From the pole position in the main event, Delong led all 15 laps to become the third different winner on the season. Wyatt Vidovich (Tony Kart) ended up second with Tristan Young (VemmeKart) joining him on the podium in third. Saturday winner Christian Cameron (Tony Kart) was fourth and top qualifier Alex Rantala (CRG) bounced back from a tough Prefinal in fifth.

The victory in Micro ROK went down to the wire. Nico Sarphati (GFC) had the victory in hand but drifted wide in one corner while fighting with a Mini ROK driver, and lost the lead to Cyress Andruss (Formula K). Sarphati ran him back down, and on the final circuit fought back for the lead in the final corners. Tucson winner Kyle Drysdale (Nitro Kart) joined the fight, making it three drivers battling for the victory. Sarphati came out with the lead and the victory, his third straight. Contact between the other two sent Andruss around in the final corner, with Drysdale taking second. 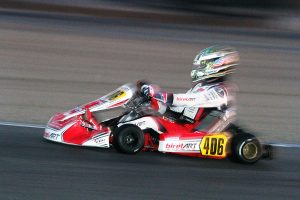 Toward the end of the race, a Mini ROK driver made contact with a barrier in the last corner. Officials were on site right away and after the race, medical team arrived at the scene. While the driver walked onto the stretcher, the driver was transported to the medical center. This put the event on a delay due to the ambulance procedures in place at the facility. Once the ambulance returned, the final two main events were held at shortened lengths due to darkness.

Senior 100cc hit the track first, with Prefinal winner Alex Siragusa (FW / CompKart) and top qualifier Oliver Calvo (LEM / Praga) led the field to the green flag for what would be a 10-lap race. Calvo jumped out to the lead and post fast laps of the race, holding off Siragusa for his fourth straight victory in the category. Henry Falls-Hand (HRT/ Redspeed) drove his way forward in his one-day start to the third step of the podium, bringing Colby Dubato (Ricciardo) with him. That dropped Eddie Shimmon (GFC) down to fifth.

Once those drivers were off the field, the Shifter ROK category was gridded on track for their 10-lap race. Jake French (FGM / Birel ART) – who won Round Three earlier in the day – completed the sweep of Round Four, leading all 10 laps of the race to put himself in the hunt for the championship. Tucson double winner Hunter Pickett (GFC) ran second with Cole Shade (GFC) in third, earning fast lap of the race. Kol Bailey and Worawong Komaracul made it four GFC drivers in the top-five.

The ROK Cup USA Challenge of the Americas is now focused on the series finale, set for March 27-29 at the Simraceway Performance Karting Center in Sonoma, California where the 10 categories will decide the 2020 champions, including awards to the ROK Cup Superfinal and ROK the RIO tickets. EKN will have complete Trackside Live coverage from Rounds Five and Six.