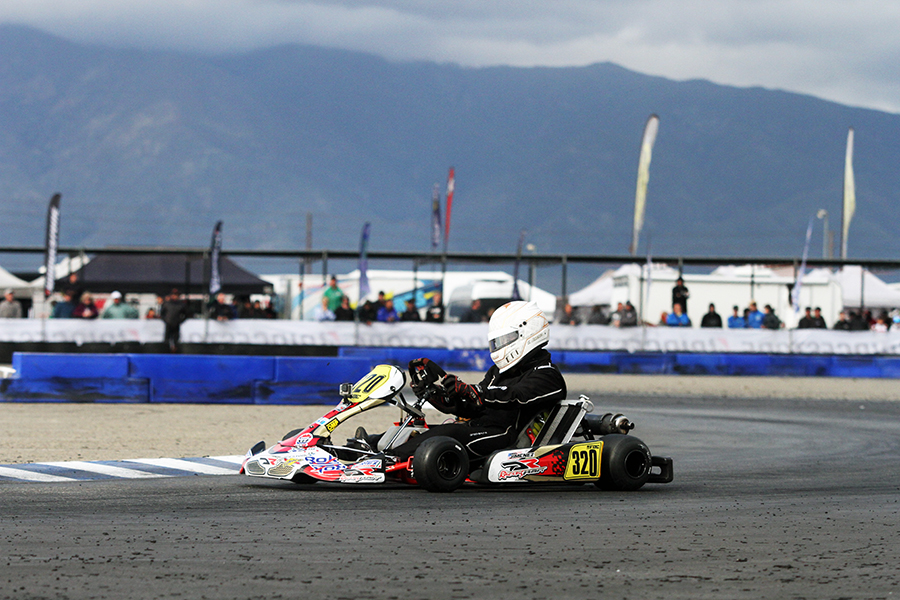 Airel Jimenez gambled with dry tires for the main event, and it paid off as she scored her first COTA main event (Photo: EKN)

The third round of the ROK Cup USA Challenge of the Americas was one of the unique days at the track. The first day of the action at the CalSpeed Karting in Fontana, California was met with and ended with challenges to the competitors. The day began with the event reaching a record total of 141 entries on the weekend, breaking the 13-year programs’ previous record of 133. Rain was forecasted throughout the day, and did hit the facility but never made an impact until the main events. The weather along with two red flags forced the day to end before three of the main events were completed. The first red flag in practice saw a Junior ROK driver transported to the hospital, and due to the rule structure of the facility, had to wait until the ambulance returned before action could continue. Another red flag came out in the Mini/Micro ROK Final, thus ending the day with the sunset looming. Both drivers suffered minor injuries and forced the final three main events to run on Sunday morning. 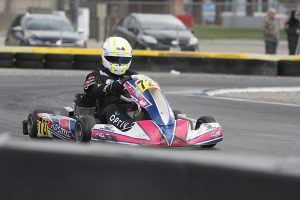 The Master 100cc category welcomed the third different winner on the season. CalSpeed Karting Manager Mike Smith (HRT / Kosmic) was able to pace the field through much of the day to earn his first COTA victory. Smith ended up winning the Prefinal and drove away to a 4.6-second advantage after 18 laps in the Final. Top qualifier Adam Kasick (HRT / Kosmic) was moved to the tail of the Final grid after an issue in tech. Kasick charged forward to end up second, edging out Nick de Graaf (MMK / Italkart). Jonathan Silva (FW / CompKart) ended up fourth with Tim Meyer (HRT / Kosmic) in fifth.

The Shifter Master ROK category appeared to be a repeat of the opening round in Tucson with Kevin Woods (RWR / CRG) setting the pace throughout the day. As the main event passed the halfway point, rain moved into the area. The drivers continued on with dry tires on a wet track. Woods, who had the victory in hand, continued to fall down the order as Jason Campbell (GFC) took control. Campbell seemed to have the race until a charging Neil Joseph (Cameron / CRG) took the lead with two laps remaining. The winner from CalSpeed one year ago managed the wet track best to reach the checkered flag first. Nick Firestone (GFC) worked past Campbell for the second spot with Ryan Yop (Tony Kart) and Thomas Contino (VemmeKart) completing the top-five. 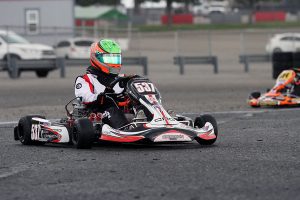 With the rain coming down, the Senior ROK division was next on track. Since this was the first session to encounter a wet track before starting, officials provided the 15-minutes to change over to rain setup. During that time the rain had stopped and the track began drying. All but one driver made the choice to rain tires. California ROK Championship title winner Airel Jimenez (DR Kart) was the lone entry to start with dry tires while the rest went to rain tires. Jimenez started 12th, and by lap three, was into the lead. She drove away to 26-second advantage for her first victory, becoming the first female winner in the category. Oliver Calvo (LEM / Praga) was runner-up, holding back top qualifier Jake Drew (FW / CompKart) with Bijoy Garg (SSM / Exprit) and Liam Letzsch (CBM / FA Kart) completing the top-five. 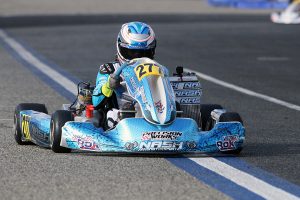 Defending Master ROK champion Derek Wang (BBR / FA Kart) added a second straight victory on the year, coming away at Round Three with a 4.3-second advantage. Wang drove up to the win in the Prefinal, and led all 18 laps of the main event to put himself into the championship lead. Billy Cleavelin (RPG / Kosmic) took over the second spot away from top qualifier Tim Meyer (HRT / Kosmic). Nick de Graaf (VemmeKart) drove to fourth, winning the battle ahead of Adam Dowler (RPM / Tony Kart).

The last three main events on the day were not completed due to a red flag for the Mini / Micro ROK Final in lap two. That event is set to be resumed on Sunday morning with the Senior 100cc and Shifter ROK categories before beginning the Round Four portion of the event.