The halfway point for the ROK Cup USA Challenge of the Americas is upon us, as the premier winter series on the left coast travels to the CalSpeed Karting facility for Rounds Three and Four of the 2020 championship series. The 13th season for the Challenge visits the Fontana, California circuit for the eighth time in program history, and the drivers are set to compete on the 3/4-mile ‘Grande’ course in the counter-clockwise direction. 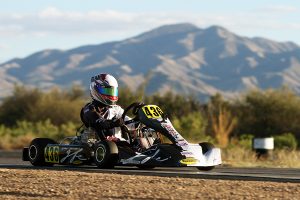 A lot of attention is on the number tally, with a stout 120 pre-entry list confirmed heading into the weekend. The goal? Break the 133-entry record mark set for the series by logging over a dozen walk-up entries to ROK Fontana. Last year’s event, which served as the 2019 season opener in February, welcomed a total of 123 entries and was struck by wet conditions throughout much of the weekend. Forecast shows two of the three days to be dry, with the weather possibly changing by the hour as we gear up for the middle weekend of the Challenge 2020 season.

eKartingNews.com is proud to providing its ninth season of Trackside Live coverage with Challenge of the Americas. EKN’s own Rob Howden will be calling the action all weekend from CalSpeed. Those unable to attend can listen in to the live broadcast – presented this weekend by Courtney Concepts, Atlanta Motorsports Park and Stilo USA. Bookmark www.ekartingnews.com/live and follow the EKN social media channels for more throughout the weekend in Fontana.

The weekend in Tucson belonged to GFC driver Hunter Pickett. The NorCal native dominated the Shifter ROK division, earning a perfect score both days to emerge as the leading contender for the Challenge championship. Pickett comes into CalSpeed seeking revenge for the poor results at last year’s event, which hurt his chances of claiming the title in 2019. Pickett’s GFC teammate Cole Shade had a breakthrough weekend in Tucson with his first COTA podium, and sits second in the standings ahead of returning driver Kolton Griffin (Pure / Tony Kart), who is two years out of the seat. 2019 Junior ROK champion William Ferguson (SSM / Exprit) also broke through in his shifterkart debut, earning a runner-up finish on Sunday and is fourth in points ahead of Jake French (FGM / Birel ART). The field is boosted to 24 drivers on the pre-entry list, including a trio of new drivers under the GFC tent and the Catalyst Driver Development team coming down from Canada, led by veteran driver Remo Ruscitti (Italkart). 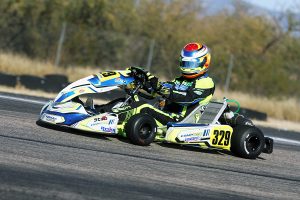 Two drivers swept the rounds in Tucson for the Senior ROK category – Jake Drew and Oliver Calvo. Drew (FW / CompKart) won Saturday and leads the championship standings ahead of Senior rookie Liam Letzsch (CBM / FA Kart). Calvo (LEM / Praga) sits third in the standings despite his sweep of Sunday’s action. It was his lack of laps on Saturday, due to a rock in the engine in the Prefinal and contact on the opening lap of the Final, that have him chasing Drew and Letzsch in the points chase. In addition to those returning from Tucson, Jonathan and Edward Portz join the fight in CalSpeed along with California ROK Championship title winner Ariel Jimenez (DR Kart), who will be making their 2020 COTA debut.

Calvo (LEM / Praga) did sweep the action in Tucson for the Senior 100cc division. Calvo beat out defending series champion Colby DuBato (PKS / Ricciardo) on Saturday and held off Toby Longenecker (Aluminos) on Sunday for the main event victories. The entry total is about the same as Tucson at 15 drivers, including a new list of pilots set to join the battle. 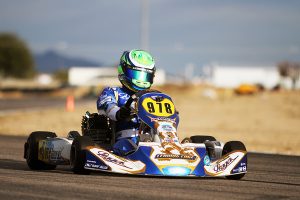 The Shifter Master ROK class is going to surpass the 20-driver mark in CalSpeed. After two rounds of racing in Tucson, there is no clear-cut favorite entering the second weekend. Kevin Woods (RWR / CRG) and Jimmy McNeil (PKS / Aluminos) each took a win at the opening event, with McNeil leading the standings by only three points. Nick Firestone (GFC) is third, back by 41 points, as is Neil Joseph (Cameron / CRG). Joseph won last year at CalSpeed in the rain. The boost in entries is with new drivers, including former Stars of Karting standout Ryan Yop (Tony Kart), who is making his COTA debut this weekend.

The race to the ROK Cup Superfinal in the Master ROK division is close with five drivers fighting for the title and the ticket to Italy. 2017 series champ Billy Cleavelin and last year’s title winner Derek Wang (BBR / FA Kart) each took a win in Tucson. Cleavelin leads the championship by four points over Nick de Graaf (VemmeKart), who was runner-up both days. Wang is third with 2018 champion Erik Jackson (JHM / Tony Kart) sitting fourth and Tim Meyer (HRT / Kosmic) fifth, all within 61 points. Cleavelin and Jackson each took a win last year at CalSpeed. 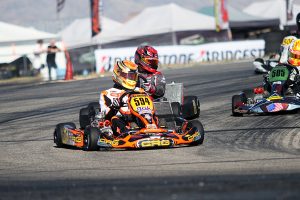 What a difference a year makes. The Master 100cc category made its debut at the Challenge last February with one entry. The program is set to be into the double digits this weekend in Fontana. Leading the way are two drivers who won in Tucson – Tim Meyer and Nick de Graaf. Meyer (HRT / Kosmic) won on Saturday with de Graaf (MMK / Italkart) earning the victory on Sunday. Young driver Stephen Brucker (JHM / Exprit) challenged the two all weekend, with the top-three separated by 38 points in the standings. Among the new drivers joining the class is Adam Kasick (HRT / Kosmic), a Senior 100cc winner last year. 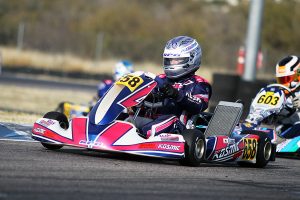 Billy Cleavelin holds the point lead in Master ROK with one victory in Tucson (Photo: EKN)

The Junior 100cc class is the only division to have less entries than Tucson, with only two drivers entered. Alex Berg (RPM / Tony Kart) swept the weekend and will be joined by Jacob Hoover (MDG / Birel ART), who recorded a runner-up finish in Tucson on Saturday.

The numbers have grown in the Mini ROK class from Tucson, with seven drivers set to battle. Tristan Young (VemmeKart) and Christian Cameron (Tony Kart) each took a win in Tucson, as Young holds the championship lead heading into CalSpeed. The gap is 18 points back to Cameron with Alex Rantala (CRG) and Alex Chartier (VemmeKart) rounding out the top-four. New for CalSpeed includes Casey Moyer (Formula K) along with VemmeKart drivers Sydney and Ryan Cassels.

Tune in to the EKN Trackside Live all weekend long and follow the EKN Social Media channels for updates and more from CalSpeed.