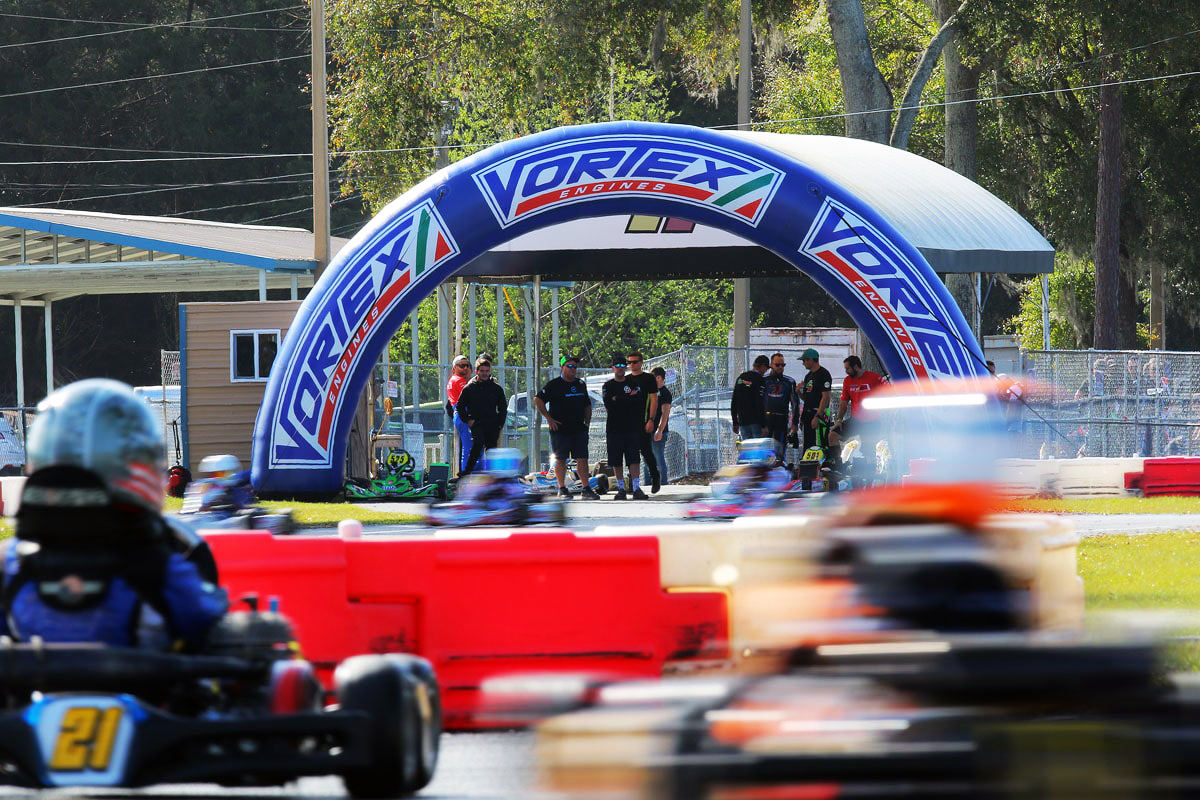 It was a picturesque day at Ocala Gran Prix as ROKKERS returned to the facility for the third and final day of competition. With heat races and prefinals complete, all that remained on the schedule was one warmup and the main events to determine the winners of round two of the ROK Cup USA Florida Winter Tour.

206 Senior
Dominating the 206 Senior competition all weekend long, Colin Warren continued his winning ways on Sunday. Taking the point from his pole position starting spot, Warren and eventual second place finisher Gianluca Savaglio drew away from the field to battle it out for the win. Finishing 2.263 ahead of third place podium finisher Alexander Searle, both American and Canadian nationalities were represented on the podium.

Zachary Linsell maintained his starting position in fourth to narrowly miss the final step of the podium while Dylan Amundsen finished fifth in the 18-lap final. The fastest lap of the race was claimed by third place finisher Alexander Searle. 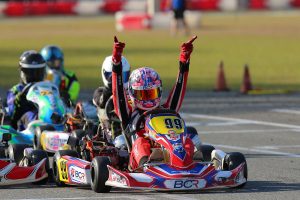 206 Junior
Just as Colin Warren did in the 206 Senior category, Mathieu Cousineau did in 206 Junior. Capturing the main event victory on the strength of his pole position starting spot, the young Canadian drove to the win to cap off an incredible weekend of competition. Logan Ferguson finished second on track but a five-position driving infraction penalty dropped him to seventh in the final running order which opened the door for Granger Perra, who also scored the fastest lap of the race, and Camden Gruber to stand on the podium. Danny Dyszelski worked his way to finish fourth while Matthew Demarinis rounded out the top-five.

Master ROK
Remaining perfect in ROK Cup USA main events in 2020, Renato Jader-David returned to the top in the Master ROK main event. Benefiting from a great start, Jader-David jumped out front and was able to control the pace of the race to take the win. Mike Rolison, winner of yesterday’s prefinal, crossed the stripe in the second position as the team owner was back on the podium 3.425 seconds behind Jader-David. Danilo Ramalho finished the 26-lap main event in third while fellow Brazilian Eduardo Magno Gaia crossed the line in fourth. Vatche Tatikian ended his weekend in fifth showing his consistency throughout the three-day event. Along with the race win, Jader-David also scored the fastest lap of the race clocking a lap of 37.985 for an average of 70.67 miles per hour. 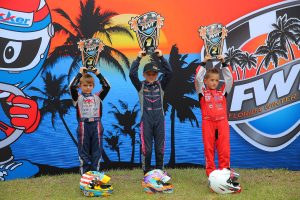 Micro ROK
Oliver Wheldon added the Florida Winter Tour round two Micro ROK victory to his resume as he topped the podium blocks in the 18-lap main event. Taking the win by 2.318, Wheldon solidified his name in the championship points battle and will now begin to prepare for round three in his hometown of St. Petersburg. Ilie Tristan-Crisan was the best of the rest as he outdueled Kai Johnson for the second step of the podium while Jack Iliffe finished fourth. With second through fourth separated by less than two tenths of a second, the trio finished just over a second ahead of the fifth place driver Jenson Burnett. Ilffe went on to score the fastest lap of the race.

Shifter Master ROK
Jordan Musser added a win as he finished perfect on the weekend in the Shifter Master ROK category. Once again, the BirelART driver drove away from the field taking a commanding 6.710 second victory as he also secured the fastest lap of the race. The TB Kart USA duo of Rene Martinelli and Peter Licciardi finished second and third as they look to put pressure on Musser during the final round of the FWT in a few weeks’ time. Michael Rivera was able to cross the line in fourth, just ahead of Canadian driver Nicolas Bedard in fifth. 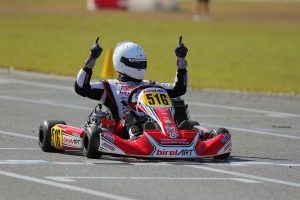 Junior 100cc / Senior 100cc
Falling out of the lead early on in the race, Connor Zilisch worked his way back to the front to add another victory to his 2020 total. Pushed all the way until the final corner of the final lap, the Team Felon driver scored the checkered flag by 0.052 over Jorge Ortiz. After taking the point early, Ortiz scored the fastest lap of the race and fell to second but was able to hold off the advances of Westin Workman, who secured the third and final step on the podium. Chloe Chambers completed her event finishing fourth while Sam Corry worked his way to a top-five result in fifth.

Julia Boos scored the 100cc Senior victory to cap off a perfect weekend in Ocala. Scoring the fastest lap of the race, Boos drove away from second and third place finishers Jenson Altzman and Justin White while Bill McBryer and Jack Drury finished fourth and fifth.

Mini ROK
Parker Delong picked up the Mini ROK win as he was another driver that capitalized on his pole position starting position in the main event. Though Delong was not the fastest driver on track, he played the game of chess to his benefit and topped the podium blocks. Diego Ardiles had a career weekend and solid main event to end his round two in the second position while round one winner Caleb Gafrarar kept his championship hopes alive finishing third en route to the fastest lap of the race. Oscar Ilffe kept the top-four within one second of another claiming the fourth position while Brazilian Enzo Vidmontiene rounded out the top-five in fifth. 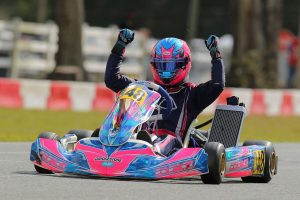 Senior ROK
Advancing forward from his third place starting position, Ryan Norberg was able to get to the point and drive away from the Senior ROK field. Polesitter Luca Mars fell victim to an aggressive start as contact in turn two slowed his momentum and relegated him to second. After some defensive driving and some aggressive passes in the opening laps, Norberg settled into the lead claiming the win by 2.120. Patrick Woods-Toth found his way to the second step of the podium, just ahead of Mars. Diego Ramos scored the fastest lap of the race en route to a fourth place effort while Christian Brooks moved his Nash Motorsportz entry to fifth before a post-race penalty dropped him to tenth and brought Enrico De Tullio to P5. Thomas Nepveu gained nineteen positions to end his weekend in fifteenth.

Junior ROK
Connor Zilisch picked up his second win of the day as he was the man to beat in the junior categories. As one of the quickest drivers of the weekend, Zilisch went on to claim the fastest lap of the race as he went unchallenged to the victory. Brent Crews advanced one position to put his Kart Republic chassis on the second step of the podium while Jace Park dropped one but held onto a P3 spot with the second and sixth place drivers separated by just over a second. Jeremy Fletcher moved from seventh to fourth throughout the 26-lap main event while Alessandro De Tullio finished fifth. 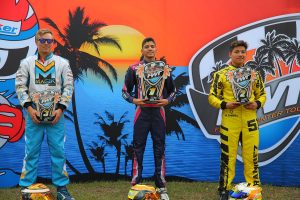 Shifter ROK
Jimmy Cabrera saved his best run for Sunday’s main event as he climbed his way to the front of the field and never looked back. Launching off the line to take the lead, Cabrera drove to the win, his first of the 2020 Florida Winter Tour. Mathias Ramirez overcame his qualifying position to move through the field and stand on the podium in second with Magik Kart’s Andre Bujdoso finished third. AJ Myers looked unbeatable on Friday and Saturday but Sunday, fell to fourth after dominating the weekend’s results. Jake French put his BirelART chassis in fifth with Daniel Formal in sixth.

The third and final event of the 2020 Florida Winter Tour will take place at the temporary circuit on the grounds of Tropicana Field in St. Petersburg, Florida. Stay tuned to the ROK Cup USA social media pages for more news, photos, information and results by following @ROKCupUSA on Facebook, Twitter and Instagram.