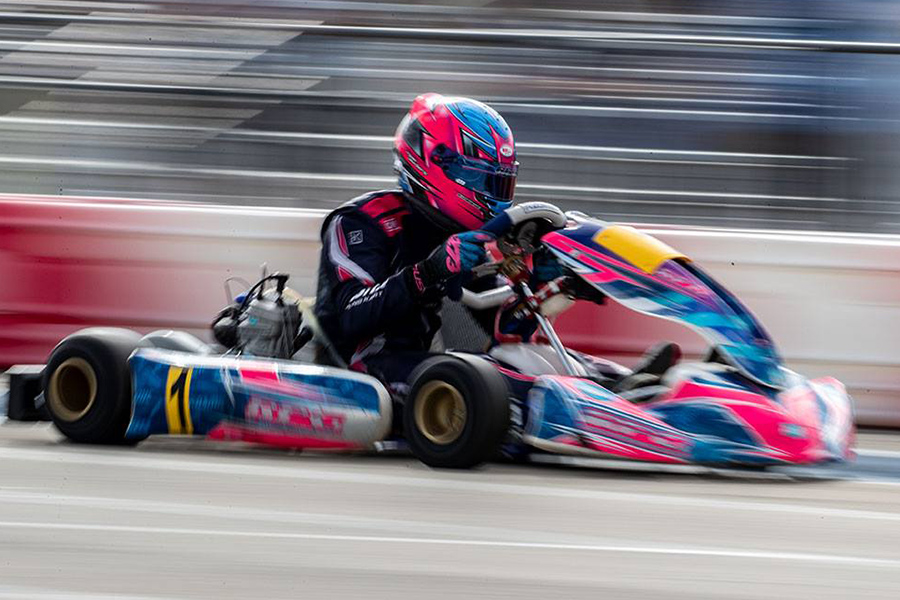 It’s been a tremendous start to the 2020 season for the Rolison Performance Group, who pulled their trailer out of the AMR Homestead-Miami Motorplex facility with a total of 10 victories and three championships in the 2020 Superkarts! USA Winter Series. The third season of the SKUSA winter program came to a close on the February 7-9 weekend with racers contesting the third and fourth rounds of the championship chase. RPG had 13 drivers competed in four categories, three of which saw RPG drivers raise the championship trophy once action completed on Sunday afternoon.

A strong addition to the Rolison Performance Group stable has been the expansion into the KA100 divisions. RPG found success with Josh Pierson in the Junior category in 2019 at the regional level, and they’re now taking that knowledge to national scene in both the Senior and Junior classes. New York’s Nate Cicero stamped his name on the KA100 Senior championship trophy at the SKUSA Winter Series with three straight victories, including a sweep of this past weekend. Coming off a win at the Round Two, Cicero dominated the action on Saturday in Round Three. Sunday’s racing featured a fight early, but Cicero kept himself inside the top-four through qualifying and the Prefinal. By the halfway point of the Final, he had taken over the lead and was able to hold on for a third straight victory.

“We are excited about the performance of Nate in the KA100 and we congratulate him on the championship,” stated Rolison Performance Group owner Mike Rolison. “Three straight wins in a competitive category such as this speaks volumes in regards to the talent he possesses and it also shows how we welcome and support the new drivers to racing under our tent. How goal is to always maximize their potential. I look forward to seeing more success with the Cicero family under our RPG banner.”

Completing the series sweep in G1 was Justin Peck. The Utah driver has raced under the RPG tent for a number of years now, and the past two months have been Peck’s top results with four straight race day sweeps of the SKUSA Winter Series program. Peck dominated the G1 division in each round, earning a perfect score toward his first series championship, and establishing strong momentum moving into the 2020 season.

“Justin’s our motivational leader under the RPG tent,” added Rolison. “A team needs that one person there to help boost you up when you are down, and that has always been Justin. He works vigorously at getting better each time he’s on-track, and the success here in Florida is the pay off.” 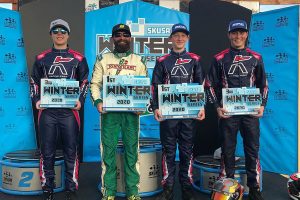 Four drivers for Rolison Performance Group stood on the podium to close out the Superkarts! USA Winter Series, including two wins by Justin Peck and Nate Cicero (Photo: RolisonPerformanceGroup.com)

The championship in the X30 Senior category went down to the wire, pitting RPG against RPG with defending series champion Ryan Norberg and Round Two victor Hannah Greenemeier in the hunt. Norberg – the four-time defending SKUSA Pro Tour champion – entered the weekend with the point lead in the series. Norberg had a typical solid day on Saturday, winning the Prefinal but coming up short in the main event to finish third. Greenemeier was lurking behind, ending up sixth at the checkered flag. She picked up the pace the following day, coming away with the Prefinal win while Norberg hovered around the tail of the top-10. Hannah led the majority of the Final, only to finish third, recording the fast lap of the race in the process to log the 10 bonus points. Norberg remained in the ninth position, and he’d drop this result and use his three earlier podiums to clinch the championship by just one point over Greenemeier for a Rolison Performance Group 1-2 in the standings.

“I’m thrilled at the finish to the series for both Ryan and Hannah,” continued Rolison. “This is Ryan’s fifth straight SKUSA title that includes the last two Pro Tour titles, last year’s Winter Series crown and championship at the California ProKart Challenge at the end of 2019. His success is helping mold the rest of our drivers, not only in the Senior levels but down to the Junior and Cadet levels. Hannah is proof of that. While the title came up short for her, we got that first win off her back, and now we can focus on getting more throughout 2020.”

One of the important elements under the Rolison Performance Group tent is driver development, both on and off the track. KA100 Senior driver Brian Boly joined RPG for the Winter Series and made vast improvements, culminating with his first SKUSA podium finish. Boly was outside the top-five at the opening event in January, and continued his improvement throughout the February weekend. He gained three positions to finish fifth in Saturday’s main event, and advanced further in Sunday’s Final, crossing the line in the third position for an impressive podium result.

The advancement to Senior from Junior level racing can be a vast gap to handle. Former Junior frontrunner Branyon Tiner made large leaps from January to February in his Senior debut, especially in qualifying. Tiner was fourth overall in Saturday’s session and recorded the fast-time in Sunday qualifying. While the final results were not as hoped, the speed is there for Tiner to become an instant contender each weekend.

Rolison said, “No matter your experience, knowledge or age, we can mold a program around what you need. In just two events, we were able to help Brian advance up the grid, and up to the podium in his first four major karting starts. For Master drivers trying to gain that tenth or two down to the young Cadet looking to build the stepping stones to a strong driving career, RPG should be your choice.”

The lone Junior driver under the tent in Homestead was two-time California ProKart Challenge champion Josh Pierson. The Oregon racer was in the top-10 all weekend, coming back from an injury suffered in January’s event. Josh finished ninth Saturday and improved to fifth on Sunday. Gia Cicero, the sister of Nate, recorded two seventh-place results of her own on the weekend to add to the success under the Rolison Performance Group tent.

All the success by the drivers and the Rolison Performance Group team is not without the hard work and dedication of the mechanics, driver coaches and families under the tent along with AVP, the in-house engine program.

The Rolison Performance Group hauler is now enroute to Ocala Gran Prix, north of Orlando, for the second event of the ROK Cup USA Florida Winter Tour. A total of seven drivers in five categories will carry the RPG flag throughout the weekend, running around the ‘bullring of karting’, a 6/10-mile, eight-turn course, for the midway point of the historic championship program.