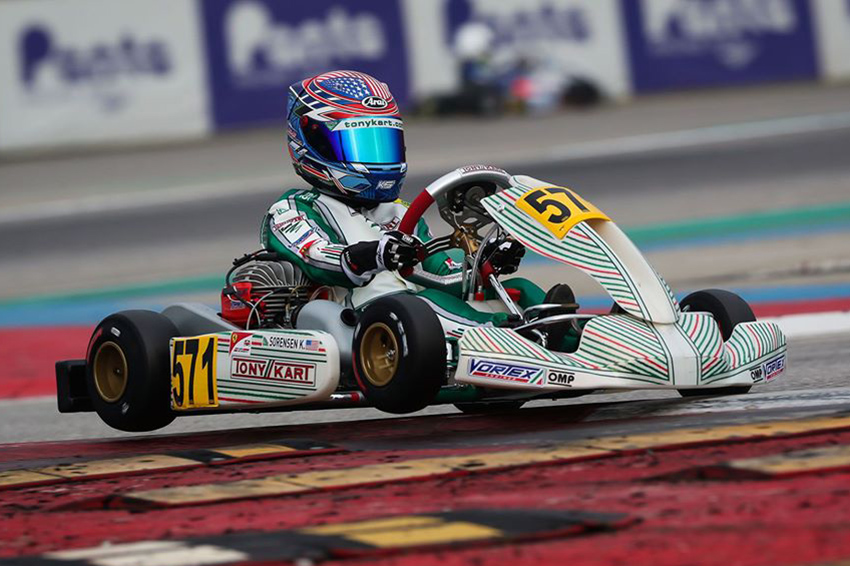 The 2020 season has a number of karters from the United States of America competing overseas. The first major event of the year took place this past weekend with the WSK Super Master Series opening up at the Adria Karting Raceway in northeastern portion of Italy. The weekend was a battle against competition from all over the world for the eight drivers that call the USA home, along with the challenging weather conditions that put everyone to the test.

The top result of the weekend for Team USA came from OK Junior driver Ugo Ugochukwu. Having competed in Europe for multiple years now, Ugo has become a regular contender each and every weekend. He qualified fifth overall and ended seventh overall after the four heat races, including one win. Ugo gained one spot in Prefinal A to finish third, starting on Row 3 for the main event. He went up to third on the opening circuit and led once on lap 10. At the checkered flag, Ugo crossed the line in third and was promoted to second on the podium after a three-second ‘bad maneuver’ penalty to British driver Arvid Lindblad.

In the Mini category, a total of four USA drivers competed at the WSK Super Master Series opener. The SKUSA Pro Tour, United States Pro Kart Series and Florida Winter Tour champion Kai Sorensen joined the Tony Kart Racing Team for his first race of 2020. The ‘California Kid’ qualified 15th overall and improved his position in all four events – placing 8th, 4th, 3rd and 2nd to end up sixth overall in the heat points. Sorensen slipped down to fifth in the Prefinal B to end up Row 5 for the main event. Kai dropped to 13th on the opening lap of the Final, but inched his way forward throughout the 10-lap main event to finish eighth in his first WSK start. 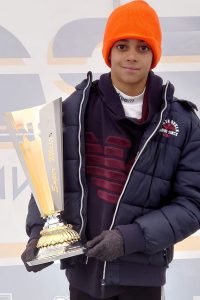 Three of the four USA drivers made the main event in the Mini category. Miguel Costa, who resides in Florida yet raced under the Brazil flag, fought forward all weekend. Costa qualified 53rd and placed inside the top-15 in all four heat races. Miguel gained another five spots in Prefinal B, placing 11th to start 22nd in the Final. He nearly took a position each lap in the main event, climbing up eight spots to 14th. James Egozi, who suffered a broken leg toward the end of the 2019 in Europe, started out 43rd in qualifying. He was up 10 spots after the heat races with a best finish of ninth. Egozi was outside the transfer positions on the final lap of Prefinal A, gaining two positions to end up 16th, one spot ahead of the cutoff for the main event. Egozi took advantage of the rear of the field start, advancing up 13 positions to finish 18th to put three USA drivers inside the top-20.

SKUSA and ROK Cup SuperFinal champion Connor Zilisch was one week behind everyone who competed at the WSK Champions Cup last weekend. Zilisch went to work for the Super Master Series opener, qualifying 42nd overall out of 75 OK Junior drivers. Three of the four heat races were top-15 results, the second heat ended in a DNF, putting him 38th overall in the heat race points. Zilisch seized the moment in the Prefinal B, climbing 10 spots in 16 laps to finish ninth for a Row 9 starting spot in the main event. Zilisch was up to 13th by lap two before getting shuffled down to 23rd before a full-course caution came out. Once the race went green, he got back up to 18th until he lost five spots on the final circuit. After penalties were handed out, Zilisch ended up 18th. Jamaican Alex Powell, starting his first season in the Junior category, recorded a DNF in the main event after gridding 32nd. Enzo Scionti was the lone USA driver in the OK category, and he unable to qualify for the Final.