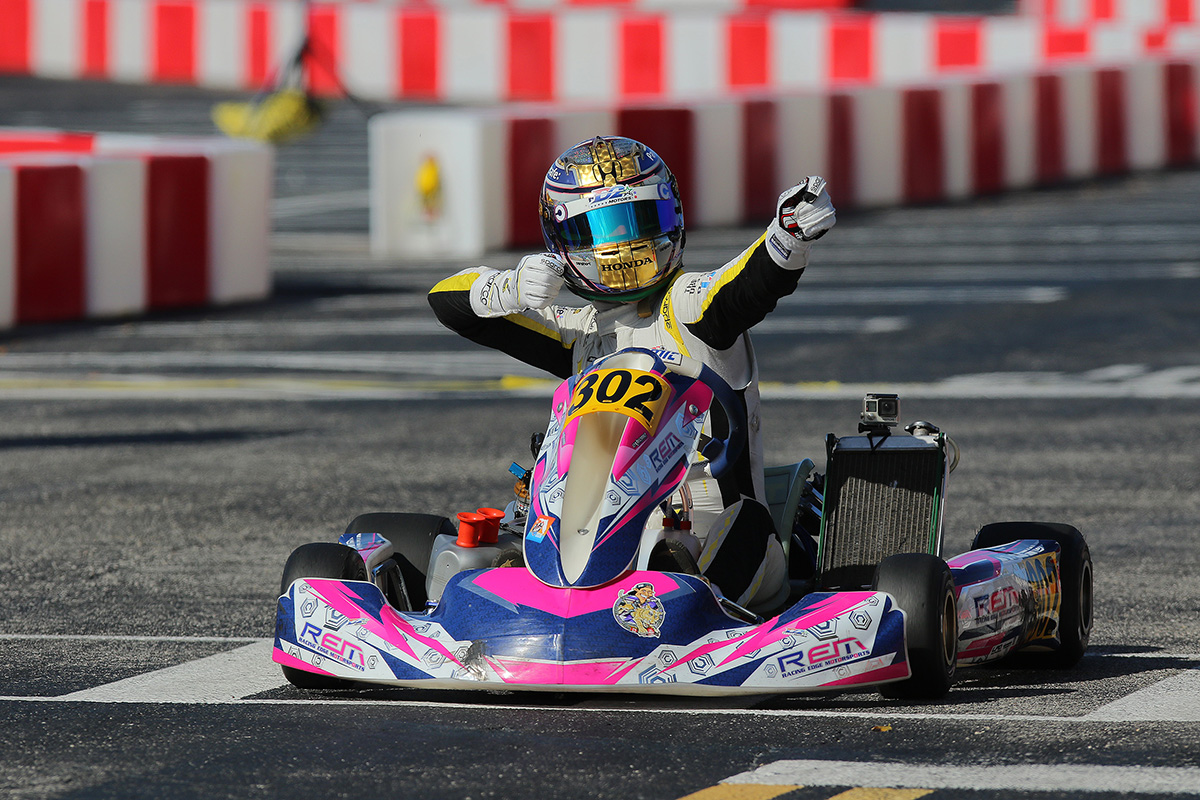 With the first month of the 2020 karting season now behind us, OTK USA is looking forward to February as they hope to continue their winning ways. Claiming for than 50% of the entries at the Superkarts! USA (SKUSA) Winter Series (129, or 53% of the entries) opening weekend and did so again the following weekend at the ROK Cup Promotions Florida Winter Tour (117 or 51% of the entries) opener, the most popular karting brand in North America racked up a staggering seventeen main event victories and an astounding 46 podium results.

Kicking off the 2020 season at the AMR Motorplex on the grounds of the Homestead-Miami Speedway, OTK branded drivers claimed four victories in the first official race of the season. Justin Peck (Rolison Performance Group) put his Kosmic on the top step of the podium in the G1 class while Kyle Wick (Rolison Performance Group) followed suit with his Tony Kart chassis in Pro Shifter. Both drivers returned to the facility on Sunday for round two and had similar results, adding another two wins to the OTK racing resume and securing a stranglehold on the SKUSA Winter Series points battle in their respective divisions.

Oliver Wheldon (JC Karting) took his OTK chassis to a pair of podium results in the Micro Swift class including a race win on Saturday. Proving his speed throughout the weekend, Wheldon returned to the podium on Sunday with a second place finish. Joining Wheldon on the podium Sunday was Jack Iliffe as he managed to put his Iron Rock Raceway prepared Tony Kart in P3. The Wheldon name was also seen at the front of the field in Mini Swift as older brother Sebastian (JC Karting) drove to the win on Sunday. Just like his brother, Wheldon showed speed and had a front of the field presence throughout the weekend. FA Kart driver Helio Meza (Iron Rock Raceway) joined Wheldon on the podium on Sunday making it an OTK kart 1 – 2 finish.

Three different OTK drivers achieved podiums in the X30 Junior class as Alessandro DeTullio (AM Engines) drove his Exprit chassis to a second place result on Saturday. DeTullio was followed closely by Paul Bocuse (Speed Concepts Racing) who steered his Redspeed well all weekend long and was rewarded with a podium finish. DeTullio returned to the second step of the podium again on Sunday as this time he was chased by Kosmic driver Jeremy Fletcher (Mike Doty Racing), who secured his first SKUSA Winter Series podium result in Junior.

Hannah Greenemeier and Ryan Norberg made it a Rolison Performance Group 1 – 2 finish in X30 Senior on Sunday as the young female outdueled the multi-time national champion to top the podium blocks in what could be the biggest win of her career. Fellow Rolison Performance Group driver Nathaniel Cicero piloted his Kosmic chassis to the win in Sunday’s KA100 Senior main event. Julia Boos (Team Felon) was able to stand on the podium in third.

Seven race wins came with the ROK powerplant at the opening weekend of the Florida Winter Tour as a podium sweep in Junior ROK was led by Tony Kart driver Connor Zilisch (Late Apex Karting). Zilisch drove to the win in an OTK podium sweep as he was followed by Guillerme Figueredo (HR Motorsports) and his Tony Kart as well as Exprit pilot Alessandro DeTullio (AM Engines). The second podium sweep of the weekend came from the ultra-competitive Senior ROK division as SKUSA SuperNationals Champion Zachary Claman took his Racing Edge Motorsports Kosmic entry to the front of the field. Tony Kart driver Diego Ramos (HR Motorsports) and Andre Nicastro (NF Sports) were able to cross the stripe second and third.

Julia Boos returned to the top of the podium in 100cc Senior with Team Felon and Kosmic followed closely by second place finisher, Exprit driver Jenson Altzman (Ruthless Karting). Zilisch returned to the top step of the podium for the second time over the weekend scoring the victory in 100cc Junior as he adds another win to his growing 2020 total. Noah Baker (Supertune) was able to breakthrough and stand on the podium in third.

After two wins in SKUSA competition, Renato Jader-David (Orsolon Racing) made it three for three to start the year as he once again found his way to the pointy end of the ROK Masters field. Driving to the win, Jader-David was joined by Danilo Ramalho (Racing Edge Motorsports) on the podium with a second place result.

AM Engines driver Salvador Dellavecchia put the Exprit brand of chassis on the top of the podium in Micro ROK dominating the weekend’s main event. Young Oliver Wheldon was on the podium for the second straight weekend with a third place finish while Chinese standout Yuanpu Cui (Supertune) finished second in Mini ROK and looks forward to round two coming up at Ocala Gran Prix.

Another podium seep came in the 206 Junior category as the OTK brand proved their speed with all engine platforms. Kosmic driver Adam Ali (Racing Edge Motorsports) took the win ahead of FA Pilot Granger Perra. Danny Duszelski put his Syntech Racing powered Tony Kart in third to make it an OTK 1 – 2 – 3.

With very little time off, the OTK brand and their dealers will return to the track in the coming weeks in the search for more race wins, podium results and championship points.