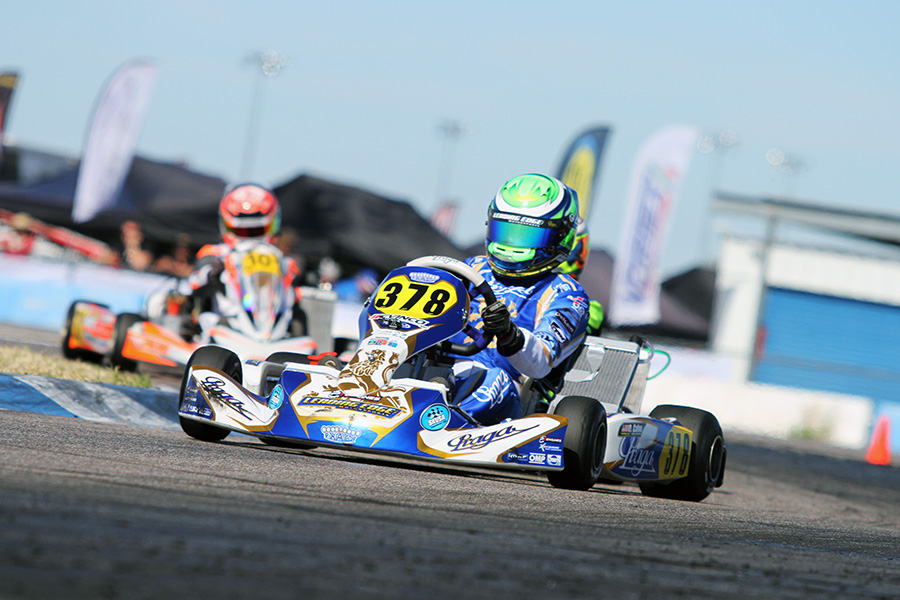 Leading Edge Motorsports scored four wins during the opening weekend of the Challenge of the Americas, with Oliver Calvo delivering three of the victories on his Greg Bell-prepared Praga chassis (Photo: eKartingNews.com)

Greg Bell’s Leading Edge Motorsports came out of the gate on fire to kick-off its 2020 karting schedule. The Lodi, California-based team traveled to Tucson, Arizona on the January 24-26 weekend to compete in the opening rounds of the Challenge of the Americas at the Musselman Honda Circuit.  The team entered a total of five drivers and scored four wins and seven podium finishes. Oliver Calvo led the way for the team on his Praga, winning three of his four main events in 100cc Senior and Rok Senior, while Cypress Andruss took a victory in his Formula K in Micro Rok.

Calvo was joined by Colby DuBato in carrying the LEM flag into battle in the 100cc Senior class and they were the dominant drivers in the category. Calvo swept all six on-track sessions in his 2020 Praga Dark Evo 2, while DuBato joined the Leading Edge tent for the first time with Glenn Araki on the wrenches in a collaboration with PKS. Calvo walked away with the win on Saturday while DuBato finished second to make it a Leading Edge 1-2.  The duo battled hard for the victory on Sunday and, in the end, Calvo stood on top of the podium ahead of DuBato in third. Arizona’s Roman Madrigal returned to the sport after a hiatus and raced with Leading Edge in Tucson, scoring a strong top-10 finish in the 100cc Senior class on Sunday. Bell expects him to step up his game at the next round with this recent experience. 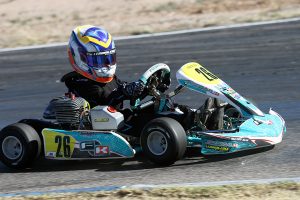 Cypress Andruss won the Saturday round of the Micro ROK division aboard his LEM Formula K machine (Photo: eKartingNews.com)

Calvo and DuBato raced in the Senior ROK class as well, as both were doing double duty. Calvo qualified second on Saturday, but failed to finish the opening lap of the Prefinal when a rock was sucked into the engine, becoming lodged within the intake reeds. Pushed to the back of the grid for the main event as a result, Calvo stormed forward on the opening lap to run third heading into the final corners of the opening lap, but tight racing activated his pushback bumper and sent him off-track. He would not return. Oliver stormed back on Sunday and topped all three sessions, winning by almost a full second.

Texan Mark Snyder made his first trip to the Challenge of the Americas and raced a Leading Edge Formula K in the Shifter ROK class. Snyder had not been in the seat since the SuperNationals in November and shook off the rust nicely.  Bell expects him to be right in the thick of things when the team returns to the track at CalSpeed. Cypress Andruss joined the Leading Edge Motorsports team for the first time and he represented the LEM Formula K brand extremely well at the opening round of the Challenge, winning the Micro Rok class on Saturday. Andruss was incredibly quick all weekend and showed poise and maturity well beyond his years. Bell is thrilled with his racecraft and cannot wait to get him back on the track at CalSpeed. 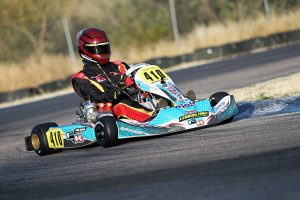 Texan Mark Snyder contested his first race of 2020, joining LEM aboard his Formula K in the Shifter ROK division, finishing just outside the top-10 each day (Photo: eKartingNews.com)

The Leading Edge Motorsports crew will now look forward to the second round of the Challenge of the Americas at CalSpeed Karting in Fontana, CA.  New Formula K and Praga chassis are currently being assembled in the shop and karts are being prepped for the next competition. Contact them by calling 866-585-5278 or visit leadingedgemotorsports.com, and be sure to follow them on Facebook.

For the last 25 years, Greg Bell and Leading Edge Motorsports have been at the forefront of the karting industry, supporting his local scene from his Lodi, California shop while also winning national races and championships with his traveling race and driver support team. In November of 2019, Leading Edge Motorsports won two of the biggest shifter kart races of the year at the ROK the Rio and SKUSA SuperNationals events in Las Vegas. As the official factory racing team for Formula K and Praga karts in the United States, Leading Edge Motorsports will compete in the Challenge of the Americas, KPX Championships and ROK Sonoma series in addition to assorted ROK Cup USA and Superkarts! USA events.