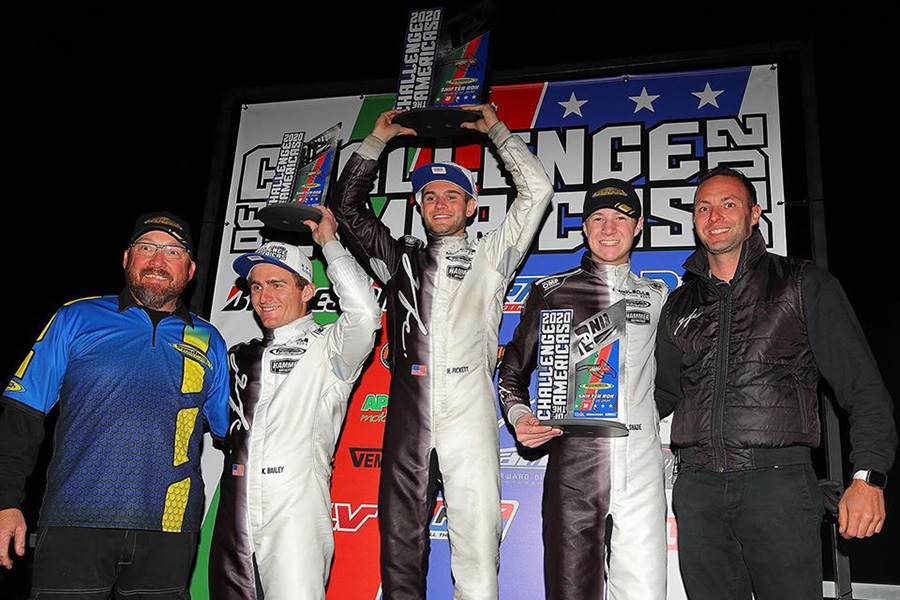 West Coast karting officially kicked off its 2020 season this past weekend at the Musselman Honda Circuit in Tucson, AZ with the opening rounds of the ROK Cup USA Challenge of the Americas and one of the biggest stories of the event was the strength of Gary Carlton’s GFC team. Carlton fielded eight entries in Tucson and came away with two wins, three poles, six podiums and nine top-fives, led by Hunter Pickett’s domination of the Rok Shifter Senior category. 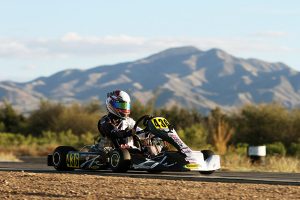 Pickett steered his new GFC GT14 chassis to dominant victories in both Rok Shifter Senior main events, sweeping all six sessions through the weekend to take the point lead to CalSpeed in February. In what was a wildly entertaining Saturday final, GFC Karting swept the entire Rok Shifter Senior podium. Pickett started on the front row with teammate Cole Shade, and the two GFC drivers pulled away to lock in the 1-2 finish early. The battle for the final step on the podium had everyone on their feet, as Kol Bailey came out on top of a thrilling last lap scrap to finish third and complete the sweep. Brenden Ruzbarsky made it four GFC karts in the top-10 on Sunday, as the Tracy, CA driver finished a strong eighth. 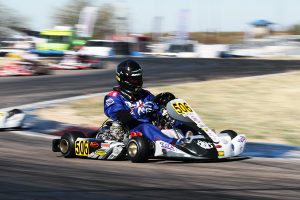 Nick Firestone turned up the wick throughout the weekend, working with Gary Carlton, and topped Sunday’s qualifying and Pre-Main sessions on Rok Shifter Masters
(Photo: EKN)

Arizona’s Nick Firestone and Jason Campbell competed with Team GFC in the Rok Shifter Masters class in Tucson and they were both competitive. Firestone finished fourth on Saturday and then topped both qualifying and the Pre-Main on Sunday. Campbell dialed it up on Sunday as well, qualifying third and holding his position in the Pre-Main. They would finish sixth and eighth in the Final, respectively, but they most definitely made their presence known all weekend. 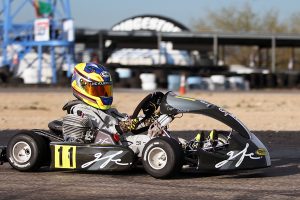 “I’m pleased with the results but, more importantly, the morale and inner-working of the team is getting stronger race by race,” Carlton told EKN. “Everyone is doing their part and I hope to continue to help guide the team in the correct path that can lead to more success. The competition is growing by each race and Tucson was a perfect way to measure where our level is on the technical side. With the data accumulated, we’ll get back to the track and continue development with the product so we can give ourselves the best chance of staying on top for the next event. I personally would like to thank all our drivers, families, mechanics, technical sponsors, and team sponsors for their continued support. Also, I want to send a huge shoutout to Swedetech Racing Engines for their support on the engine side. Swedetech has been a huge piece to the Team GFC project from day one and we feel honored to have their support along the way.

The GFC brand will be back in action on the East Coast before resuming their hunt for COTA titles in Fontana, as Gary will travel to Florida to work with GFC dealer Rivera Karting at the second round of the ROK Cup USA Florida Winter Tour in Ocala on February 13-16.