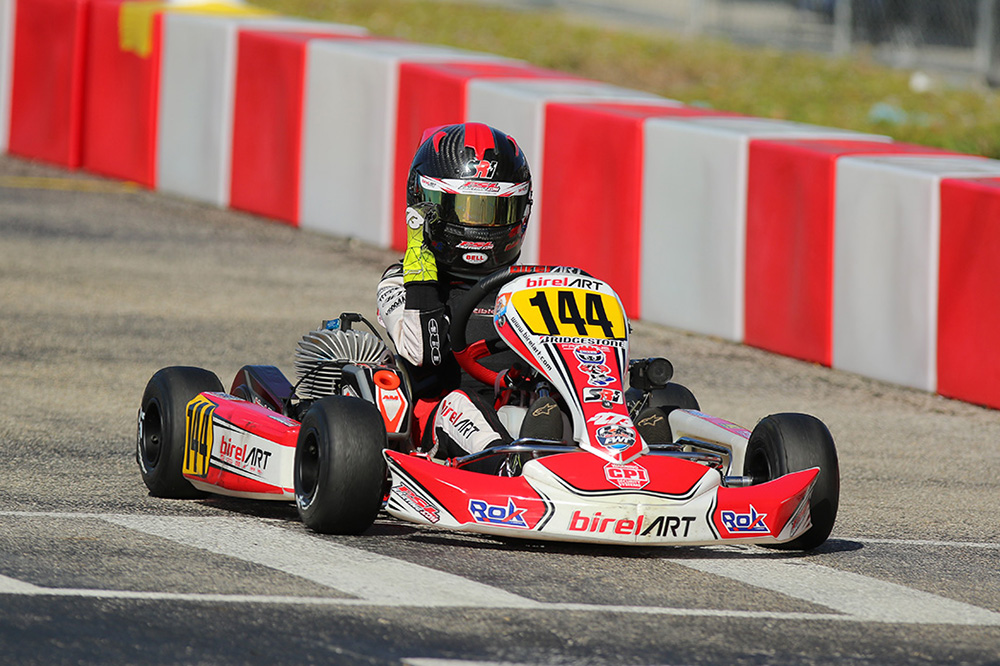 With their second event in back-to-back weekends, Birel ART North America brought a truckload of competitors to the opening round of the ROK Cup USA Florida Winter Tour. Taking place on a temporary circuit adjacent to the Isle Casino in Pompano Beach, Florida, the multi-dealer program walked away with two victories and twenty top-ten results to kick off the Vortex ROK karting program.

Scoring main event victories and leaving the first round of the Florida Winter Tour with the championship point lead was Mini ROK competitor Caleb Gafrarar and ROK Shifter Master driver Jordan Musser. Gafrarar qualified on the pole position and progressed through the heat races nicely. Claiming the prefinal victory on Saturday afternoon, the young PSL Karting driver drove to victory on Sunday in the main event. In similar fashion, Musser was the dominant driver in ROK Shifter Master. Mirroring Garfrarar’s results, Musser secured a dominant victory as both drivers look to head to round two and extend their point lead.

In the ROK Shifter class, it was four Birel ART North America drivers finding their way to the top-ten. ANSA Motorsports driver Daniel Formal scored the best result after muscling his Charles Leclerc Kart to a fourth place result after a shifter lever issue, while PSL Karting’s Jake French followed closely in fifth after his second place result in the prefinal. Eduardo Barrichello drove to a sold eighth place finish while father Rubens came from last on the grid to finish 12th, scoring the second fastest lap of the race after an issue in the prefinal. Michael Stevens was able to cross the stripe in ninth.

Phil Giebler Racing’s Vatche Tatikan won his prefinal and secured a fifth place finish in the ROK Masters main event while PSL Karting and Canadian pilot Marc Stehle leveled up from his eighth place qualifying effort on Friday to stand on the third step of the podium on Sunday. In ROK Senior, Thomas Nepveu qualified on the outside of the front row and won all three heat races to secure the pole position for the prefinal. Unfortunately, his engine would not start for the prefinal and he was forced to start from the tail of the field for the final driving forward to finish 14th.

Ben Cooper Racing driver Ellie Crisan had a consistent Micro ROK race weekend finishing seventh in the main event after qualifying seventh on Friday and crossing the line eighth in the prefinal. PSL Karting competitor Sacha Maguet was at the front of the Junior ROK field qualifying P2 and progressing through the heat races with solid results. Another second place result in the prefinal looked to be a positive step for a podium result, but in the end, it wasn’t meant to be and Maguet secured another top-ten for Birel ART North America.

Ben Cooper Racing’s Mathieu Cousineau turned his LO206 Junior second place qualifying effort into a prefinal win as he threw his hat in the mix for the race win. Prime Powerteam driver Logan Ferguson also battled at the pointy end of the field throughout the weekend as both drivers went on to garner fourth and ninth place results respectively. Joining them in the top-ten was Matthew Demarinas from Prime Powerteam, who ended his weekend in seventh.

In the LO206 Senior class it was six Birel ART North American drivers in the top-ten after qualifying including Prime Powerteam’s Jordan Prior on the pole position and QG3 driver Ian Quinn in P3. In the end, Prior was able to claim the sixth position after Sunday’s final checkered flag while Kelsey Hann from Gerald Caseley Racing ended the weekend in eighth.