The 13th season for Challenge of the Americas is set to kick off this weekend at the Musselman Honda Circuit. ROKkers from all over North America will converge on the Tucson, Arizona facility from January 24-26 to contest the opening two rounds of the premier winter series on the left coast. Nearly 100 drivers are registered in the 10 categories set to compete on the weekend, which should see perfect January weather for the southwest. 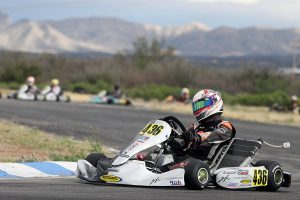 eKartingNews.com is proud to be entering the ninth season of Trackside Live program with Challenge of the Americas. EKN’s own Rob Howden will be calling the action all weekend from Tucson. Those unable to attend can listen in to the live broadcast – presented this weekend by Courtney Concepts, Leading Edge Motorsports and GFC Karting. Bookmark www.ekartingnews.com/live and follow the EKN social media channels for more throughout the weekend in Arizona.

Over 30 shifters will be in attendance in Tucson with more schedule to arrive when registration opens trackside. The Shifter Rok Senior division is at 16, and should eclipse the 20 mark by the time official practice opens Friday. Defending series champion Ron White (RWR / CRG) suffered a motorcycle accident in December and is still healing from injuries. He will be trackside with his Ron White Racing squad, but not in the driver’s seat. That opens the door for a new champion, with Hunter Pickett as the early favorite. The GFC driver scored two wins at the Tucson weekend and finished second in the standings. Through in former national champion Jake French (FGM / Birel ART) coming off a top-five at the Florida Winter Tour, they lead the top contenders. 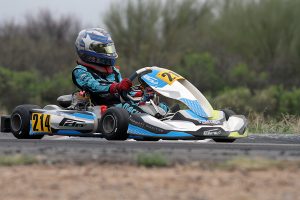 Macy Williams is among the top returning drivers in Junior ROK (Photo: EKN)

The category is welcoming a number of new drivers to the field, including Senior ROK champion Cooper Becklin (FGM / Birel ART), Jace Denmark-Gessel (RPM / Tony Kart), Hannah Greenemeier (RPG / Tony Kart) moving over. 2019 Junior ROK champion William Ferguson (SSM / Exprit) is making the move up adding five gears along with Ethan Ho (APM / OTK). Top shifterkart drivers Race Liberante (J3 / CompKart) and Kol Bailey (GFC) are scheduled to be at the event as well, not yet on the entry list.

The title slot is open as well in the Shifter ROK Masters class with defending champ Rod Clinard (RWR / CRG) cutting back his racing schedule in 2020. This year’s field is stacked, including 2018 champ Kalvin Chen (FKC / Italkart) and two-time vice-champion Nick Firestone (GFC). Veteran shifterkart drivers Mike Jones (DKC / Sodikart), Terry Lawrence (VemmeKart) and Jimmy McNeil (PKS / Aluminos) lead the depth of the field that will be fighting for podium positions on the weekend. 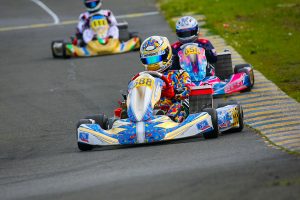 With drivers who were or scheduled to move up to Senior ROK, the numbers are a bit down from 2019 entering Tucson. Two-time race winner Jake Drew (FW / CompKart) and Colby DuBato (PKS / Ricciardo) were among those fighting for the championship last year, and lead the charge going into 2020. Oliver Calvo (LEM / Praga) is among the top drivers on the west coast, making his COTA debut this weekend. Canada’s Griffin and Adam Dowler (RPM / OTK) should be a factor all weekend. Jenson Altzman (Ruthless / Exprit) and Eddie Shimmon (GFC) have the opportunity to break through this weekend in the category, scoring zero podiums in 2019. Liam Letzsch (CB / FA Kart) is the lone rookie in the field.

The Junior ROK field has solid numbers going into the weekend, with the top drivers from 2019 graduating up. Macy Williams (CB / FA Kart) is the top returning driver from 2019, scoring two podiums with one victory. This year provides the opportunity for Hallie Schroeder (Ruthless / Exprit), Cole Schroeder (Ruthless / Exprit), and Rye Myers (FDM / OTK) to step up and battle for podium results this year. Max Oplaski (RPM / OTK) ended 2019 with strong momentum and could take it into the COTA opener. 2019 Mini ROK champion Enzo Deligny (RPM / Tony Kart) is among the top rookies in the field, including AJ Zarcone (RPM / Tony Kart), Ian Qiu (BBR / Tony Kart) and Patrick Molnar (PLM / Tony Kart).

The Masters ROK division is always a competitive one at the Challenge. This year is no different with defending champ Derek Wang (BBR / FA Kart) leading the way. His top rival in 2019 was veteran Billy Cleavelin (RPG / Kosmic) with 2018 champ Erik Jackson (JHM / Tony Kart) and Nick de Graaf (VemmeKart) expected to be among those fighting for podium finishes. 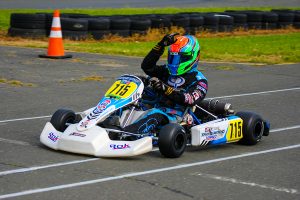 An increase in numbers is showing for the opener in the 100cc divisions. The Senior 100cc class is up to 13, with them setting the bar on Colby DuBato (PKS / Ricciardo). The 2019 champ won the final three races last year to close out the title chase. Jackson Dunn (FDM / CompKart) and Everest Fedler (FDM / CompKart) were among the top contenders last year that are returning. A number of new names will be doing battle in the class, including Toby Longenecker (Aluminos), Nathan Martin (FDM / CompKart) and Tommy Traylor (TKT / Birel ART).

New for 2020 is the Junior 100cc division, featuring for drivers in its debut. Calgary’s Alex Berg (RPM / Tony Kart) and Kiefer Peet (K&K) are making the trek from the north with California drivers Stephen Brucker (JHM / OTK) and Andrew Chapman (FW / CompKart) rounding out the field.

Tune in to EKN Trackside Live all weekend long and follow the EKN Social Media channels for updates and more from Tucson.