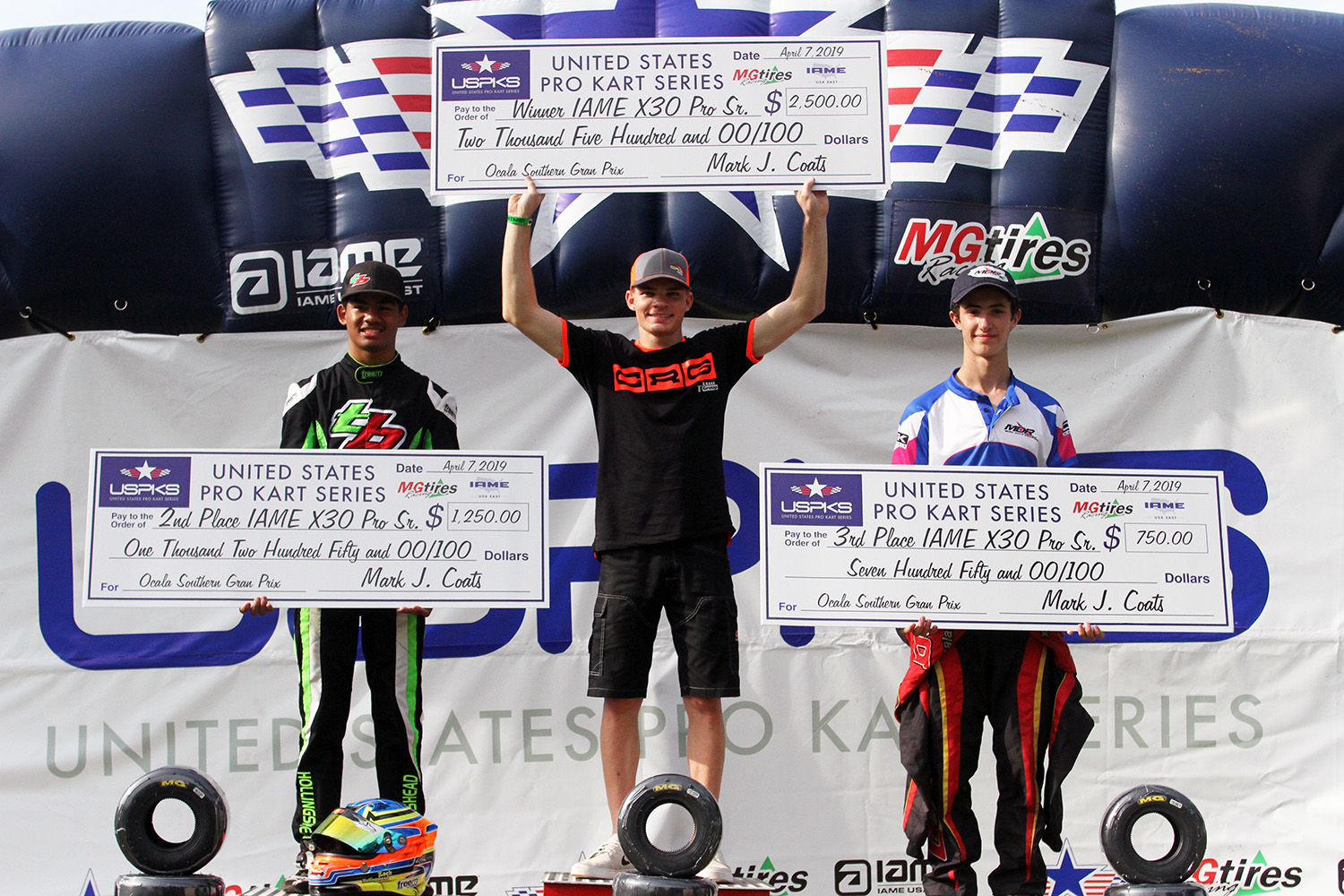 The USPKS has increased its weekend purse for X30 Pro and X30 Pro Junior to over $15,000 for all three events (Photo: EKN)

With a new decade now underway, the United States Pro Kart Series (USPKS) presented by MG Tires and IAME USA East, is preparing to roll into their 2020 racing season.  But first, a look back at what has been accomplished so far.

The USPKS certainly has made an indelible mark on the sport of sprint karting in the USA.  When series owner Mark Coats, along with 10 other veterans of the sport, hatched a plan in 2012 to shake up a sport. Karting appeared to be on the decline or at the very least, stagnant, and there were plenty of skeptics who gave USPKS little chance to survive.  Seven seasons have passed since then, and the USPKS continues to not only survive, but show the way in many areas. Industry leading tech inspection, and a close partnership with IAME and engine builders, has led to continued improvements in the ability to ensure fair technical competition. These factors also allowed USPKS to pioneer American usage of the European designed pushback bumper, which has now become standard kit stateside.  A smooth, simple process, along with a friendly registration staff has made lines a thing of the past, and competitors are very happy every time they arrive at the event.  USPKS has also raised the bar on sprint karting purses, awards, tickets, prizes and more, and it will not be stopping anytime soon. In short, the once-upstart series has become an industry leader in less than a decade.

One defining theme was part of the original USPKS charter, and that theme has held true for all seven seasons; listening to the racers.  The USPKS is not a profit center or someone’s personal livelihood.  It exists for the racers, as without them, there are is no racing.  The changes that the USPKS has gone through in its short seven-year rise to the top, have all been driven by racer request.  Just a few short months ago, the series asked its competitors for feedback on whether or not there should be another event added to the USPKS Championship, and the overwhelming response was “Yes”.  And while every effort was made to expand the 2020 schedule, frankly, it just was not in the cards.  To add to a crowded event calendar now, after all the schedules are out and plans have been made, just did not make sense.  BUT…the 2021 USPKS championship program will definitely feature four events, and at least two different tracks. Much of the clamoring for an additional event has come from racers and teams based in the west, so the series is investigating to expand in that direction.  Look for the 2021 USPKS championship series schedule to come out in late summer/early fall, so you will have plenty of time to clear your calendar!

USPKS once again is leading the charge to the bank, with increased cash prizes in X30 Pro and X30 Pro Junior. Last year, X30 Pro competitors raced for a weekend purse of $4500, with $2500 going to the overall winner, $1250 to second, and $750 to third.  For the 2020 season, the X30 Pro weekend purse has been nearly doubled and expanded to include the top-five. The cash prize to the weekend winner is now $5000, $2500 to second, $1250 to third, $750 to fourth, and $500 to fifth place. The X30 Pro Junior class weekend purse has also been increased. The weekend winner receives $2500, second takes $1500, third grabs $750, and fourth place is handed $500. This overall weekend purse of just over $15,000 will be shared by nine drivers, making USPKS one of richest paying sprint kart series in the USA. And, all nine of those prize winning drivers will also receive a set of tires courtesy of MG Tires.

What has become a staple with the United States Pro Kart Series is the year-end awards. The 2020 championship will feature all the same great IAME prize packages as in 2019, including the IAME International Final tickets, IAME engines, and IAME rebuild kits.  Plus, the USPKS Winner’s Circle packages, MG Tires, and tons more stuff from other series sponsors along the way.

One of the great benefits of the United States Pro Kart Series is the amount of track time and the shorter days compared to other programs. The series features seven of the best IAME classes, without needing to spend all day and night at the track while getting all the laps you can handle.  And don’t forget about the free Friday night cookout at every event.  Look for the online entry for the first event of the 2020 season at Ocala to open on February 22, remaining open for one month.  Visit the series website at www.uspks.com for all the series info (clicking on the “+” by each event will show the event hotel listing and more).