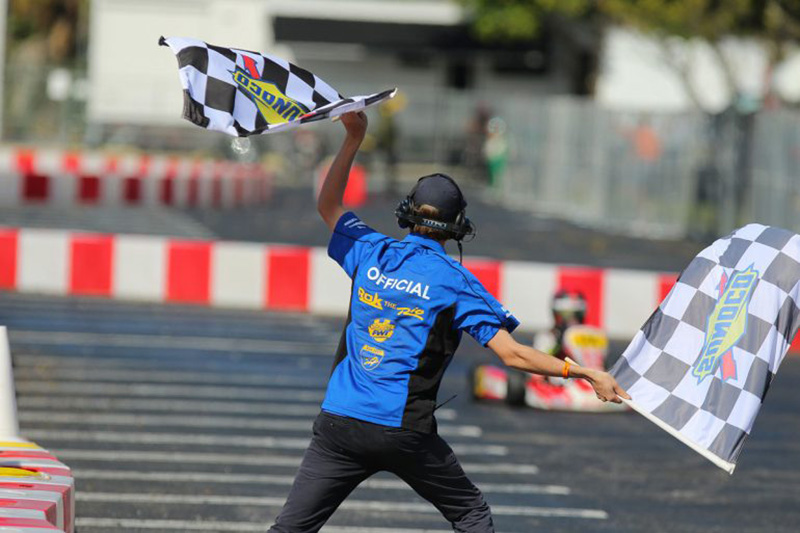 ROK Cup Promotions is kicking off their 2020 event calendar this weekend at Isle Casino in Pompano Beach, Florida for round one of the Florida Winter Tour. Taking place on the temporary circuit on the grounds of the Isle Casino Racing Thursday, January 16 to Sunday, January 19, 231 drivers from across the globe will be taking part in the event’s 22nd year.

After participating in one qualifying session, three hear races and one pre-final event, drivers competing in the first round of the ROK Cup USA Florida Winter Tour took to the track one final time on Sunday for the final and main event. Starting lineups for Sunday’s races were determined by the finishing results in Saturday’s Pre-Final.

With the day split into morning and afternoon sessions, drivers entered in 206 Junior, Master ROK, Micro ROK, 100CC Junior and Senior and Shifter Master ROK took part in the morning session completing one warmup session followed by the final. 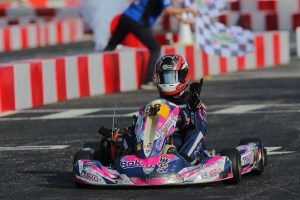 Beginning the race with Mathieu Cousineau (Montreal Karting Club) on pole and Adam Ali (Racing Edge Motorsports) slotted in beside him, Cousineau was shuffled to the seventh position as Adam Ali took the lead – ultimately winning the first round of the Florida Winter Tour. Prime Power House’s Logan Ferguson crossed the checkers in second, but after receiving a seven positions penalty, he finished ninth in the official results. Coming in second just 0.484 seconds behind Ali was Granger Perra. Danny Dyszelski of Syntech claimed the third position. Polesitter Mathieu Cousineau came in fourth and Daniel Ali finished out the top-five. 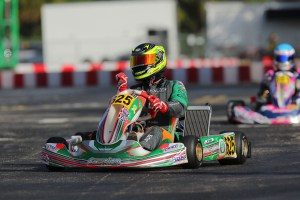 In a weekend long battle between frontrunners Danilo Ramalho, Vatche Tatikian, Renato Jader-David and Gaia Magno, Sunday’s final event was anyone’s to win. Renato Jader-David (Orsolon Racing), was ultimately successful, taking home his first win of the weekend.  Coming in second was Danilo Ramalho (Racing Edge Motorsports), who charged his way from the back of the field, gaining twelve positions. PSL Karting driver Marc Stehle finished in the third position followed by Gaia Magno and Vatche Tatikian rounding out the first five positions. 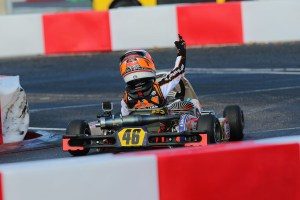 Salvador Dellavecchia (AM Engines) has dominated the entire weekend at Isle Racing Casino, winning all thee heat races and once again he was able to take the checkered flag, winning the first of three rounds in the Florida Winter Tour by a whopping 6.586 seconds. Kai Johnson (AKT), who struggled at the start of the weekend, began making a comeback during Saturday’s Heat 3 and Pre-Final. Continuing his climb to the top, Johnson finished the final event in second. Oliver Wheldon finished in the second position in two heat races as well as the pre-final this weekend, but in the final race, the JC Karting driver had to settle for third. Behind him was Jordan Di Leo (Goodwood Kartways) and Asher Ochstein (Benik). 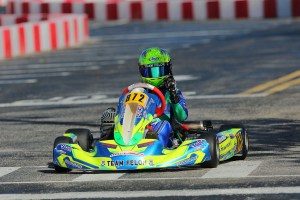 In the start of Sunday’s Final, polesitter Alex Stanfield (Crosslink Competition) was immediately overtaken by Late Apex Kartworks’ Connor Zilisch. Zilisch maintained his lead over the field for the remainder of the race, where he continued to stretch his lead to 6.297 seconds over Westin Workman (Timmy Tech/Compkart) by the final lap. Noah Baker charged up four positions, finishing in third ahead of Sam Corry (Team Felon) and Danny Dyszelski (Syntech). In the sixth position was Cole Schroeder of Ruthless Karting who made his way through the field gaining an impressive fourteen positions. 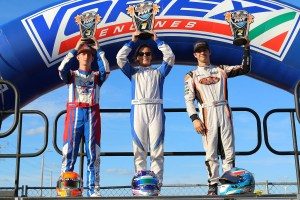 The senior class took to the track simultaneously with the Junior 100cc class, starting in the back of the field. As they have run all weekend, Team Felon driver Julia Boos worked to extend her lead, ultimately ending 1.939 seconds ahead of second place finisher Jenson Altzamn (Ruthless Karting). 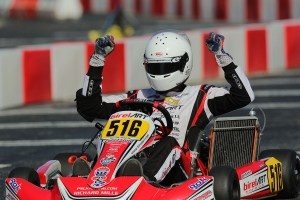 In Sunday’s final event, Jordon Musser (3G Kart Racing/PSL Karting) confirmed that he cannot be beat. Starting on pole and quickly establishing a dominating lead of 9.640 seconds over Daniel Dibos (JC Karting), he took the win. Also winning each heat of the weekend and the pre-final, Musser could not be passed in round one of the Florida Winter Tour. Victor Jimenez (Rolison Performance Group) finished in third in front of Rene Martinelli (TBKart USA). Hernando Sanchez rounded out the top-five for the main event of the weekend. 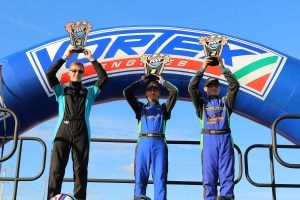 First on track were the Senior 206s. After completing all sixteen laps of the main event, Colin Warren (VLR/TS Racing) was the first to cross the finish line. However, after receiving a two-position penalty from the start of the race, he fell back into the third position. Alexander Searle (MGM), who had yet to finish in the top-three all weekend, claimed the victory, followed by teammate Zachary Linsell. Searle and Linsell were joined in the top-five by a third MGM teammate, Dylan Amundsen in the fourth position. TBKart USA driver Jed Perkins worked his way up from eighth to finish in the top-five. 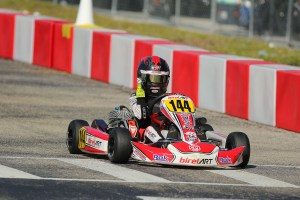 In the Mini ROK final, PSL Karting driver Caleb Gafrarar started on pole after winning Saturday’s Pre-Final event. Falling behind on the start, Enzo Vidmontiene (U-Race) took over the lead. By lap five, Vidmontiene had fallen out of the race and Yuanpu Cui (Supertune USA) took over the lead with Gafrarar close behind him. With eight laps to go, Gafrarar reclaimed the lead, ultimately winning the final event with Cui coming in a close second. Matias Orjuela (Parolin Factory Team) scored his best finish of the weekend, moving up six positions and finishing third, followed by Ayden Ingratta (Speed Concepts Racing) and Luis Umana (AM Engines). Also of note, Parker Delong (Syntech) and Max Garcia (Kart Republic North America) each moved up sixteen positions, finishing in the sixth and seventh positions. 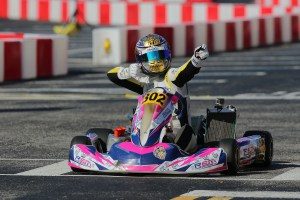 For the Senior ROK class, REM’s Zachary Claman continually found himself in the top-five, but had yet to earn a win the entire weekend. In Sunday’s main event, Claman started in the second position, but made quick work to catch the polesitter, Diego Ramos (HR Motorsports) and pass him for the lead on the first lap. From there, Claman held onto his lead claiming victory over Diego Ramos. The remainder of the top-five held their starting positions, finishing where they started. Andre Nicastro (NF Motorsports) finished third while Luca Mars (Speed Concepts Racing) and Cole Morgan (Supertune USA) filed in behind.  Rolison Performance Group’s Ryan Norberg gained an impressive 12 positions to finish sixth while Thomas Nepveu (PSL Karting) improved by 20 positions for 14 place. 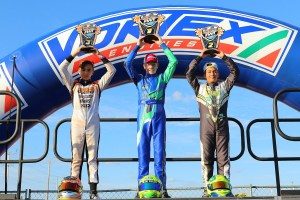 Junior ROKKER Connor Zilisch (Late Apex Kartworks) never dropped below the first position during a single race the entire weekend and continued his trend in Sunday’s main event where he clinched the lead for the final time, beating out another frontrunner, Guillerme Figueredo (HR Motorsports) who claimed second. Alessandro De (AM Racing Team) moved up four positions for the third place trophy, while Brent Crews (Kartsports North America) improved by six positions into fourth. Carson Morgan (Supertune) finished out the top-five. The biggest movers of the Final were Paul Bocuse of Speed Concepts Racing and Thomas Annunziata of Team Ferris/Team Felon – both moved up seventeen spots through the field. 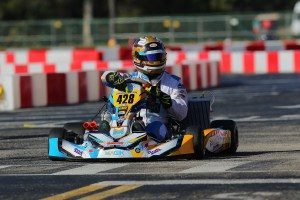 For the culminating event of the weekend, the Shifter ROK drivers took to the track for the final time of the weekend. Taking the win for the fourth time this weekend, AJ Myers of Checkered Motorsports held onto his pole position for the entirety of the race while the remaining drivers battled it out behind him. Nearly 3.5 seconds back was Austin Garrison from TBKart USA followed by Davide Fore from Goodwood Kartways – both drivers improved their positions by three and six points respectively. Daniel Formal (ANSA Motorsports) also maintained his position, finishing in fourth followed by Jake French in fifth. Coming in in the sixth position was GFC/Trackmagic driver Mathias Ramirez, who moved up 24 positions from the very back of the field.

With the first round of the 2020 ROK Cup USA Florida Winter Tour now complete, the series, teams and drivers will now set their sights on Round 2, which will take place next month February 13-16, 2020 at Ocala Gran Prix in Ocala, Florida.

A complete set of session results can be found on the easy to navigate ROK Cup USA app or by clicking here.

A constant stream of posts via the ROK Cup USA social media pages continue to put the event in front of the karting industry around the world. Stay tuned for more news, photos, information and results by following @ROKCupUSA on Facebook, Twitter and Instagram.