Multiple victories and podiums for OTK race team in Florida 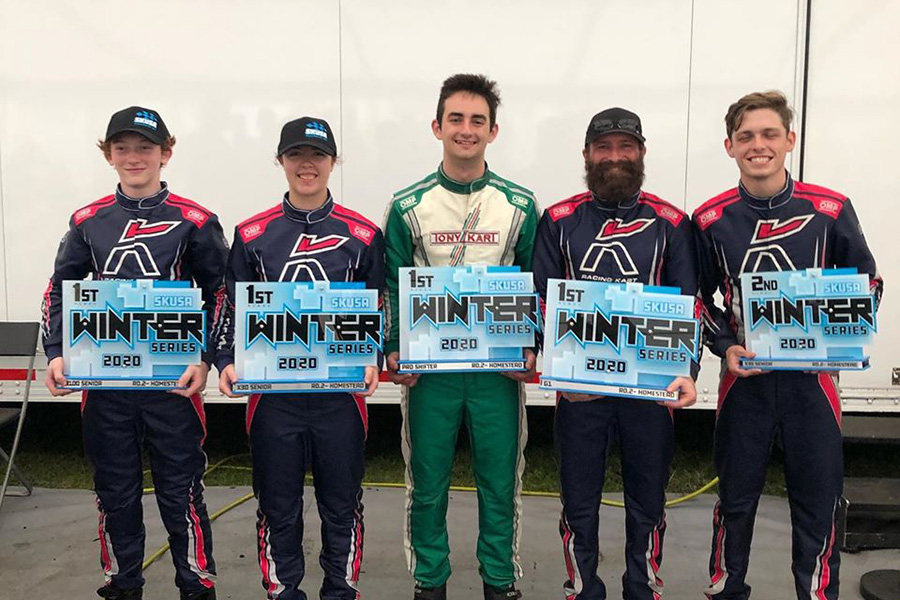 Sunday podium finishers for Rolison Performance Group at the opening event of the SKUSA Winter Series in Homestead, Florida

Success is not something that happens overnight. It requires time, dedication, and full effort to reach that full potential. This approach has always been the focus with the Rolison Performance Group. The Oregon-based karting team is among the best driver development programs in North America today, utilizing the vast amount of experience in the coaches under the tent along with the world championship OTK product line each driver pilots.

“We are here to build a culture of success,” stated Rolison Performance Group owner Mike Rolison. “The majority of the drivers we have under the tent have been with us for over a year. Some began at the Cadet level, and others as a Junior driver. They have the ability to learn from one another, guided by our very successful coaches. An achievement for one driver is not celebrated by just them, but the entire team. We work together to reach our goals and along the way, we gain strong accomplishments on and off the track.”

The first event for Rolison Performance Group on the 2020 calendar took the team to the AMR Motorplex in Homestead, Miami for the Superkarts! USA Winter Series opener on January 10-12. A total of nine podium finishes, including six victories, highlighted the first race weekend of 2020.

Leading the way with two victories in the Pro Shifter category was Kyle Wick. Returning home to RPG at the end of 2019, Wick was among the first drivers to join the race team in the early beginnings. Kyle has taken what he has learned over the years with RPG to take on the very best shifterkart pilots in North America, earning the 2019 SKUSA Pro Tour championship. In only his third event back with RPG aboard the Tony Kart chassis, Wick swept the two main events. Saturday was a complete sweep from qualifying to the last checkered flag, posting the fast lap of the Final. Kyle missed out on fast lap in Sunday’s qualifying session, but made up for it by winning the Prefinal and Final, including another fast lap honor. In the same session, Utah’s Justin Peck doubled up in the win column, scoring the victory in the G1 division both days to kick off his 2020 season on top. 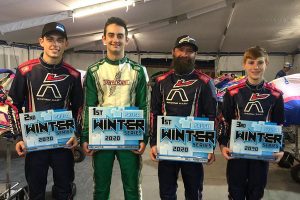 One of the biggest wins of the weekend came at the hands of Hannah Greenemeier, aboard an RPG Kosmic. A longtime RPG team member now entering her third season at the Senior level, Greenemeier has become a regular fixture at the front of the X30 Senior fields. Her development under the RPG tutelage took her from a mid-pack driver to among the best as a Junior. The transition to Senior racing was only a small hurdle thanks to the guidance of the RPG coaches. In 2019, Hannah gained her first California ProKart Challenge victory and begins 2020 with her first SKUSA Winter Series triumph. Greenemeier overcame a DNF on Saturday after putting herself within the top-five battle. She set the tone Sunday with quickest lap of the qualifying session yet ended up second in her Prefinal. After moving backward outside of the top-five early on, she worked back inside the top-three quickly. From there, Greenemeier attacked and put herself into the lead by lap nine and drove away to a near three-second victory.

“It has been a long time coming for Hannah,” added Rolison. “From the time she joined our team, I knew she had great potential. Over the last two seasons, she’s shown the speed to be one of the best, and just had not been able to put the complete day together. She did that in Homestead. I can’t thank Mike Beeny and Bonnier Moulton enough for guiding her the entire time. Their efforts have not only been a great benefit to her, but the entire team. The team chemistry is solid, and we are going to be tough to beat in all categories for 2020.”

Making it a 1-2 finish for RPG was four-time SKUSA Pro Tour champion Ryan Norberg. The defending SKUSA Winter Series champion opened up his second season with RPG with a pair of runner-up finishes aboard his Kosmic machine. Norberg was involved in an epic main event battle for the victory on Saturday, just missing out on the top step of the podium. Sunday was an amazing drive from 18th on the grid after a Prefinal penalty to join Greenemeier on the podium with a second-place performance. In total, RPG garnered six top-10 finishes with five of the X30 Senior drivers under the tent. Jacob Gulick continues to be among the top contenders weekend after weekend, placing eighth both days. Brazilian Joao Renato Corbellini scored the Prefinal win ahead of Hannah on Sunday, but slipped back to ninth in the Final. Senior rookie Bryson Morris used the knowledge gained in his final year in Junior categories last year with RPG to advance up the ranks. It was a successful first weekend in X30 Senior, placing seventh on Saturday with an 11th-place result Sunday.

The sixth victory came in the KA100 Senior class. It was a first weekend for Rolison Performance Group fielding drivers in the category, and also welcoming the brother and sister duo of Nate and Gia Cicero from New York. Nate came just short of the podium in the opening round on Saturday, placing fourth. Sunday was his turn to shine, securing the lead in the main event with his RPG Kosmic and earning his first SKUSA victory. Gia added to the top-10 results for RPG on the weekend, placing sixth on Saturday. North Carolina’s Brian Boly had two of his own in his first event with RPG. Boly was ninth on Saturday and improved to seventh on Sunday.

Josh Pierson added to his trophy mantle with his first of hardware 2020. The Junior driver attempted to run double duty on the weekend with a X30 Junior Kosmic machine and KA100 Junior Kosmic ride, however, an injury forced him out of competition on Sunday. His decision came after earning a third place result in the KA100 Junior category on Saturday. Pierson, the 2019 California ProKart Challenge champion, was top-three all day, gaining the third step of podium in the main event.

The Rolison Performance Group crew remains in Florida for this weekend, traveling roughly 100 miles north to Pompano Beach for the opening round of the ROK Cup USA Florida Winter Tour. A total of six drivers in five categories will carry the RPG flag throughout the weekend around the 7/10-mile, 14-turn temporary circuit outside the Isle Casino Racing Pompano Park.

The Rolison Performance Group is a leading race team and prep shop in American karting. Owner Mike Rolison, known as “Roli” at the racetrack, has built a career coaching some of the best kart racers on the West Coast. Over the past decade, he has helped 100′s of drivers and mechanics improve their craft. Mike brings world class driving and coaching experience to every racer he works with. Drivers who have been part of the Rolison Performance Group team over the past few seasons have recorded several national victories, claiming Superkarts! USA Pro Tour and Challenge of the Americas titles. RPG provides trackside support and arrive-and-drive programs for many series and events throughout the season. The team is a Kosmic chassis and product line dealer and is proud to campaign karts on the regional and national stage.