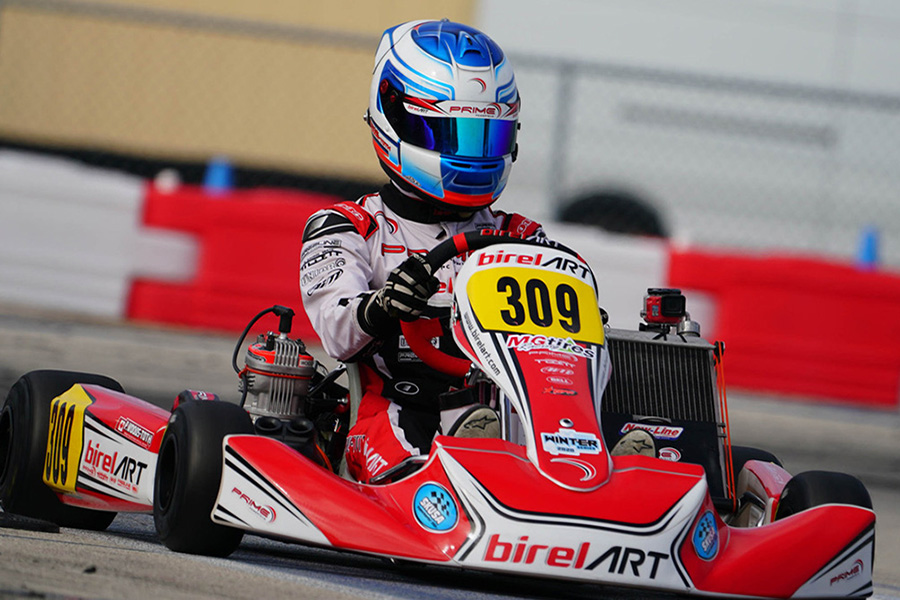 Taking part in their first event of the 2020 race season, Birel ART North America entered a handful of drivers in the opening round of the Superkarts! USA (SKUSA) Winter Series. Hosted by the AMR Motorplex in Homestead, Florida, the Birel ART contingent showed great speed and pace, closing the first race weekend of the year with wins and podiums.

“It was a good weekend for us, but not a great weekend,” explained Birel ART North America’s Dominic Labrecque. “We had several drivers in contention but had some bad racing luck, but that is racing. We definitely showed great speed sweeping fast lap honors in X30 Senior over the two main events and will work hard again this coming weekend to ensure we are at the front of the field.”

Two podiums and one win came from the X30 Senior ranks as Patrick Woods-Toth was able to take the checkered flag. After finishing third in the prefinal, the PSL Karting driver scored the fastest lap of the main event to take the race win, the first of the year for Birel ART North America. Thomas Nepveu overcame a disappointing 18th place qualifying effort to drive forward to claim an impressive fourth place result. Returning to the track on Sunday, Nepveu leveled up to stand on the podium in third while it was Woods-Toth’s job to come from the tail of the field rebounding from an opening lap incident that dropped him to 30th, to score the fastest lap of the race and a sixth place finish.

Sacha Maguet proved his speed in the X30 Junior class by qualifying third for both Saturday and Sunday’s wheel-to-wheel competition. Finishing seventh in the first main event, Maguet drove from 16th in Sunday’s final to just miss a podium result crossing the line in fourth.

Jackson Pearsall added a podium result for Birel ART North America improving from Saturday morning’s sixth place qualifying to drive to the third step of the podium. Sunday looked to be a carbon copy for the young driver as he once again qualified P6 and was running third in the main event before being involved in an incident on the final circuit.

Caleb Garfarar proved his pace in Mini Swift with another top-ten performance. After qualifying sixth on Saturday, an unfortunate issue in the day’s main event forced him to the sidelines. Returning to the track Sunday with a vengeance, Garfarar turned his eighth place qualifying effort into a sixth place result at the conclusion of the final on track session of the weekend.

Birel ART North America will return to the track this weekend for the opening round of the ROK Cup USA Florida Winter Tour with a strong driver lineup. Taking place at the Isle Casino in Pompano Beach, Florida, the team dubbed the “Red Army” will be aiming for the front of the field and the top step of the podium.