Over the weekend, P1 Promotions held a Facebook Live broadcast and poll to confirm the 2020 plans of the Lockhart Grand Prix. On May 16-17, karts will return to streets the Texas town, located roughly 30 miles south of Austin, known as the Official BBQ Capital of Texas. The street race is the first of three one-off events hosted by P1 Promotions, co-owned by Mark and Gina French. 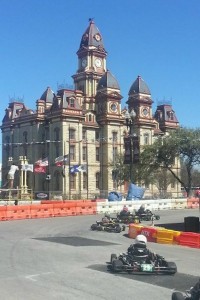 Lockhart, Texas will welcome karts once again with P1 Promotions hosting the Lockhart Grand Prix on May 16-17

Karts first hit the town of Lockhart in 2013 and return the next two years before the event went away. P1 Promotions has worked tirelessly over the last few months working with Lockhart officials to bring karting back to the area.

P1 Promotions hosted a Facebook Live show to discuss the upcoming return of the Lockhart Grand Prix and details surrounding the event. Among them were the track layout. The 2020 edition will replicate the original layout from 2013 and 2014, featuring a 7/10-mile layout of 11 turns around the downtown district that includes the historic courthouse square.

Also announced was the class line-up for the 2020 edition of the Lockhart Grand Prix. During their broadcast, a total of eight categories were announced with a poll running over 24 hours to decide a ninth. Karters submitted their request and two additional classes were added to the roster, making it a total of 10. Classes may be combined depending on numbers and time. All categories will compete on Evinco Tires. 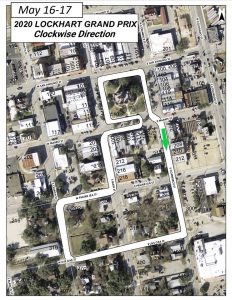