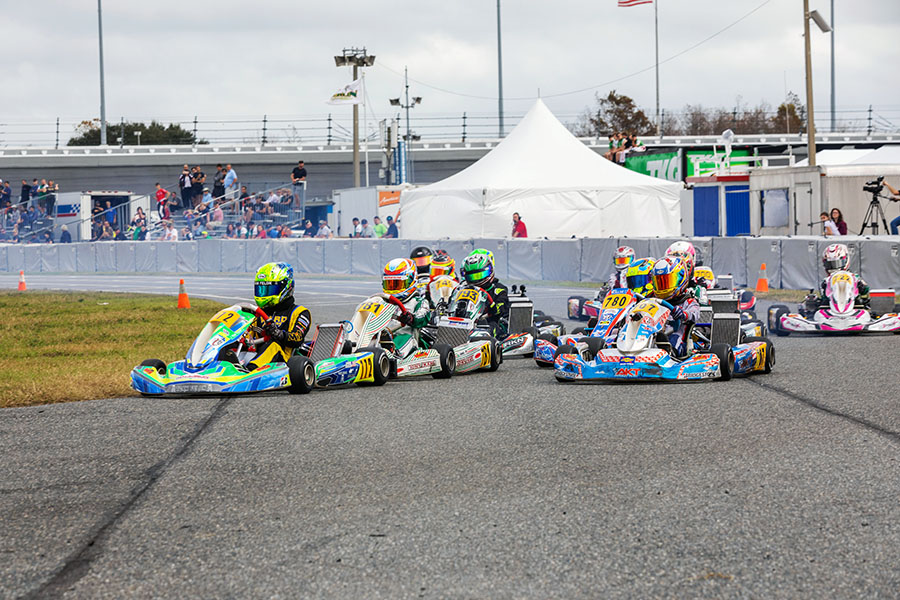 The 2020 karting season is officially underway as the World Karting Association hosted the 45th anniversary event of the Daytona KartWeek. Racers from all over North America converged on the Daytona International Speedway for a trio of events, including the Manufacturers Cup Series, National Road Racing Series and Dirt World Championships. Weather was a major factor from December 28-30, with rain hitting the area the first two days, and thankfully staying away on the final day of action.

For the Manufacturers Cup Series, the event began a new era for the historic sprint series as a partnership with ROK Cup USA along with a format change to one main event per race weekend kicked off the 2020 season. A total of 12 classes competed in 10 race groups over the three days. Qualifying was held at the end of Day 1 following official practice while two rounds of heat races were contested on Day 2. For Day 3, the final heat race shaped the grids for the main events to crown this year’s WKA Daytona KartWeek winners. 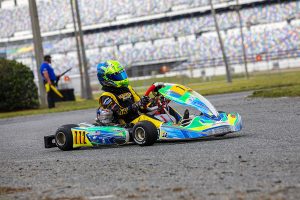 It has been some time that the event saw one driver earn three or more victories in the same year at Daytona on the Manufacturers Cup Series side, dating back to 2013 with John Paul Southern Jr. winning four in Cadet competition and Matt Solarczyk grabbing four in the Junior categories. If there were two main events per class this year, Connor Zilisch may have won six. Instead, Zilisch left as the clear top driver in the Junior categories, dominating all three classes.

Zilisch began by leading every single lap of the event in the X30 Junior category. After clearing the 18-driver field by two tenths in qualifying, Zilisch went untouched through the three heat races. He capped it off leading all 22 laps in the main event for a 5.7-second margin of victory for his first win of the event. Thomas Annunziata won the battle for second over Nikita Johnson. Jamaican Alex Powell was fourth in his Junior debut with Raiden Nicol fifth. 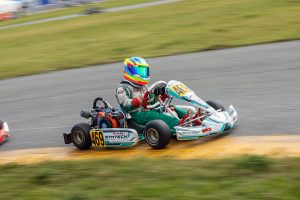 The second class in the order was the 100cc Junior division – featuring the IAME KA100 and Vortex VLR powerplants. Zilisch, utilizing the VLR engine, set a fast time of 42.679 ahead of Jamaican Alex Powell. Connor led all 12 laps of the opening heat race but weather played a big role in the second heat. Rain hit the area as the field hit the track with Zilisch sticking with dry tires. A group of drivers went out on rain tires, and were able to perform much better. Logan Adams came away with the win while Zilisch fell to 16th. With the progressive format, Connor had to start in that position for the third heat race. It took him all 12 laps to climb up and retake the top spot, grabbing the win on the final circuit ahead of James Overbeck and Adams. With the points totaled up from the heat races, Adams and Overbeck started on the front row with Zilisch in P4. It took Connor four laps to grab the lead and from there, drove away to a 7.5-second advantage for his second win of the event. Westin Workman was moved up to the second spot after Thomas Annunziata was given a two position penalty. That also moved Sebastian NG, making his Junior debut, onto the podium in third. Danny Dyszelski was fifth. 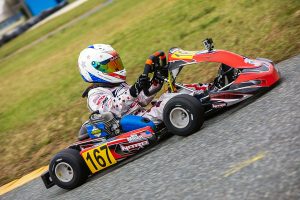 The final Junior class in the order was the ROK Junior division where it was a close battle through the event. Qualifying saw the top two of Zilisch and Jeremy Fletcher separated by just two thousandths of a second, as Connor’s 41.646 was the best lap. Zilisch won Heat #1 while Fletcher recorded fast lap. Fletcher grabbed both in Heat #2 as Zilisch recorded a DNF in semi-wet conditions. By lap four of Heat #3, Zilisch was back at the front and scored the win along with fast lap. The main event was all Connor, leading the 22 laps for his third victory of the WKA Daytona KartWeek. Fletcher drove to second with Danny Dyszelski moved up third after a penalty to Nikita Johnson.

The event nearly saw two drivers earn three victories. Cadet driver Parker DeLong took the checkered flag in all three classes, but left with only two victory trophies. The first came in the Briggs 206 Cadet division, featuring an event high 36 drivers. DeLong cleared the field by over two tenths of a second in qualifying before winning the opening two heat races. 2019 vice-champion Spencer Conrad took it to DeLong in the third heat race, leading the majority of the race and holding on by 84 thousandths at the line for the win. The two led the field to the green flag for the main event with DeLong on the pole position. They swapped the lead a few times until defending class champion Ben Maier came up from 11th to join the fight. DeLong was able to hold off Maier’s charge for the victory, as the two were separated at the line by just one thousandths of a second in a wild photo finish. Conrad settled for third with Christopher McKeithan fourth and Austin Olds in fifth. 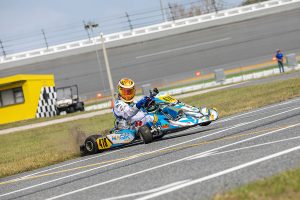 Mini Swift was the next Cadet class in the order, and qualifying was another tight session. The top six drivers recorded a lap within 94 thousandths of each other, with DeLong recording the fastest lap of 44.968. It was just one thousandths quicker than Karsyn Walters. They ran 1-2 in the opening heat race with DeLong taking the win. Heat #2 appeared to be DeLong’s as well until the final lap when Cameron Myers, making a return to the driver’s seat after a hard incident at the end of 2018, snuck by to win the race by 30 thousandths. Myers was able to get away in Heat #3, leading all 12 laps to earn the pole position for the main event. Myers jumped out to the lead early until DeLong took over after two laps. From there, he led the remainder of the race to what was the provisional victory. A penalty for a starting lane infraction took that win away, dropping DeLong to third in the order and handing Ben Maier the victory. It move Myers to second ahead of DeLong on the podium. Christian Quijano and Walters completed the top-five.

The ROK Mini class was all DeLong. Leading every lap through the three heat races, DeLong led all 22 laps of the main event to establish a 6.6-second advantage to claim his second victory of the event. Christian Quijano was runner-up ahead of Kaleb Renella with Rodney Dowless Jr. retiring early in fourth. 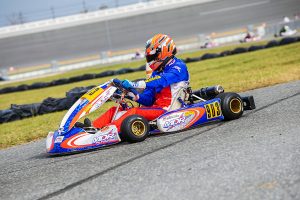 The 100cc Senior class welcomed 35 drivers for the third largest division of the event. For much of the event, it was the Brandon Jarsocrak show. The EKN TaG Driver Rankings #2 driver cleared the field by two tenths of a second in qualifying before going on to win Heat #1. Wet weather changed the outcome in Heat #2 with second qualifier Austin McCusker showing the way as Jarsocrak fell to fourth. Jarsocrak responded in Heat #3, jumping back to the lead and earning the win ahead of McCusker. Starting on the pole position, Jarsocrak jumped out to the lead in the main event and seemed to have a comfortable lead. That was until a charging Santino Ferrucci had something to say. The current IndyCar driver returned to the Daytona KartWeek event for the first time since 2011, and was the quickest kart on the track by a few tenths. He reeled in Jarsocrak and worked by for the lead with a few laps remaining. Ferrucci crossed the line as the provisional winner, however, was handed a pushback bumper penalty. That gave the win to Jarsocrak and moved McCusker to the second spot on the podium. Ferrucci was classified in third with Bryson Morris fourth in his Senior debut over fellow Comet Kart Sales driver Garrett Adams. 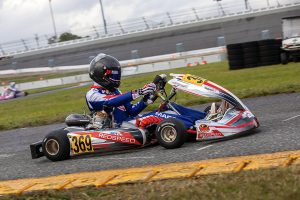 Shifterkarts returned as part of the WKA Manufacturers Cup Series and will be part of the program full time in 2020 with the ROK Shifter Senior and ROK Shifter Master classes. Nine drivers competed in the Senior class, with two fighting for the top spot all event. Austin Garrison set fast time in qualifying (40.464) with second place Andrew Bujdoso grabbing the win in the opening heat race. Garrison came back to win the final two heat races to earn the pole position for the main event. Garrison led the first 10 laps before Bujdoso took over and led the remainder of the race for the victory. Kyle Apuzzo completed the podium in third with Zachary Hollingshead fourth and Rory van der Steur in fifth. Hugh Templeman was the lone driver in the Master category.

The ROK Senior class featured a number of drivers making the transition up from the Junior ranks. Top qualifier Aaron Benoit set fast time and won the opening two heat races before Brazilian Matheus Morgatto won the final heat. Benoit earned the pole position for the main event with Luca Mars slotted in second ahead of Morgatto. It was Morgatto as the early favorite, taking the lead and showing the way until lap 15. That is when Mars pulled the trigger to claim the top spot. Leading the remainder of the race, Mars scored victory in his Senior debut, winning by seven tenths over Morgatto. Benoit was third with Luke Lange making the top-four all drivers in their Senior debut. IndyCar’s Santino Ferrucci ran double-duty, placing fifth after Jonathan Portz was given a two position penalty for a starting infraction. The ROK Masters class ran with the Junior drivers, featuring two drivers. Curtis Terry swept the event ahead of Safet Hatic II. 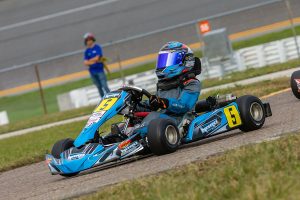 Caleb Tarter came away with the victory in ROK Micro (Photo: BH Perception)

A total of 16 drivers competed in the ROK Micro class with a number of drivers in the hunt throughout the event. Kai Johnson, fresh off victory at ROK the RIO in Las Vegas, set fast time in qualifying. He won the opening heat race before Isaac Malcuit won the final two heat races. They filled out the front row for the main event and led the way early. Before the halfway point, Caleb Tarter came up from his fourth place starting spot to take over the lead. Tarter ran fast laps of the race to lead the remainder of the main event to score the victory. Johnson settled for second with Malcuit in third. Alessandro Truchot and JJ O’Neil completed the top-five.

The Manufacturers Cup Series will take the next three months off before it resumes on April 17-19 with the second edition of the Charlotte Motor Speedway Karting Challenge. The Daytona KartWeek was the first half of the reestablished Florida Winter Cup Series, with the finale scheduled for February 21-23 at the Orlando Kart Center.