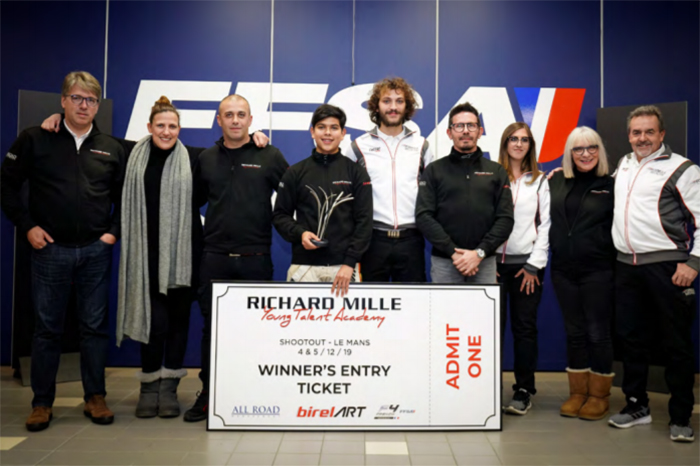 Held in difficult weather conditions, the second Richard Mille Young Talent Academy highlighted Mexico’s Rafael Villagomez among the 17 young talents gathered at Le Mans. After rigorous physical, mental and sporting evaluations, Rafael made the difference with his ability to progress, suggesting excellent potential in motor sport. Richard Mille has shown his confidence in him by offering him the chance to participate in the 2020 French F4 Championship.

Amanda Mille, Director of Customer Marketing, praised all the participants before revealing the name of the winner: “The constant fog on the Bugatti circuit made the young drivers task particularly difficult. We were pleasantly surprised by their seriousness and motivation in these harsh conditions. Despite the changes we have had to make to the programme, they have all demonstrated great abilities and I am sure they have a bright future ahead of them. The jury was unanimous in selecting Rafael Villagomez, a promising talent who has shown strong potential for adaptation and progress in every circumstance. With no experience in motor racing, he was able to significantly improve his lap times despite the reduced visibility. His performances, among the fastest at the end of the day, completed an already very positive physical and mental assessment. We are delighted to support him in 2020 in the French F4 Championship and in the longer term, if he fulfils the hopes we place in him.”

As the Richard Mille Young Talent Academy rule states, the commonality between the 17 drivers aged 14 to 18, from 14 nations and four continents, remains their remarkable karting experience on the Birel ART Group chassis, the partner of this unique scholarship. Chosen by their respective Birel ART distributor or by the Birel ART Racing Team in Maya Weug’s case, they were invited to participate free of charge in the two and a half days of the second edition of the RMYTA from 3rd to 5th December 2019 at Le Mans.

Within the FFSA Academy facilities, they were first subjected to physical and mental assessments prepared by Formula Medicine, Dr. Riccardo Ceccarelli’s famous driver training facility. Then, an instructor from the FFSA Academy introduced them to the basics of driving the F4 FIA on the Bugatti circuit. The day ended with a one-on-one interview with members of the panel in the presence of the parents.

On Thursday, 5th December, the driving sessions on the Bugatti circuit had to be adapted to the reduced visibility caused by fog. The contenders learned the track behind the safety car before having two 30-minute sessions in the early afternoon. Seven drivers were then selected for the final phase. Giorgios Markogiannis (GRC), Satumno Thanapongpan (THA), Craig Tanic (FRA), Pablo Perez De Lara (MEX), Mac Clark (CAN), Shrien Naidoo (ZAF) and Rafael Villagomez (MEX) faced the clock one last time in the fog for 15 minutes.

“Rafael Villagomez undoubtedly made the difference by making steady progress over the two days,” said Ronni Sala, President of Birel ART Group. “This second edition of the Richard Mille Young Talent Academy confirmed the great interest in its concept by giving young kart racers racing under the colours of Birel ART a great opportunity to prepare for their move to single-seaters. I would like to thank Richard Mille once again for his essential involvement in this unique event in the world, as well as the professionalism of the FFSA Academy teams who contributed greatly to the success of this second edition. I salute the impeccable behaviour of every participant and wish Rafael, our 2019 winner, every success.”

Come back in 2020 for the selection of the third Richard Mille Young Talent Academy, open to all Birel ART drivers wishing to move towards single-seaters.