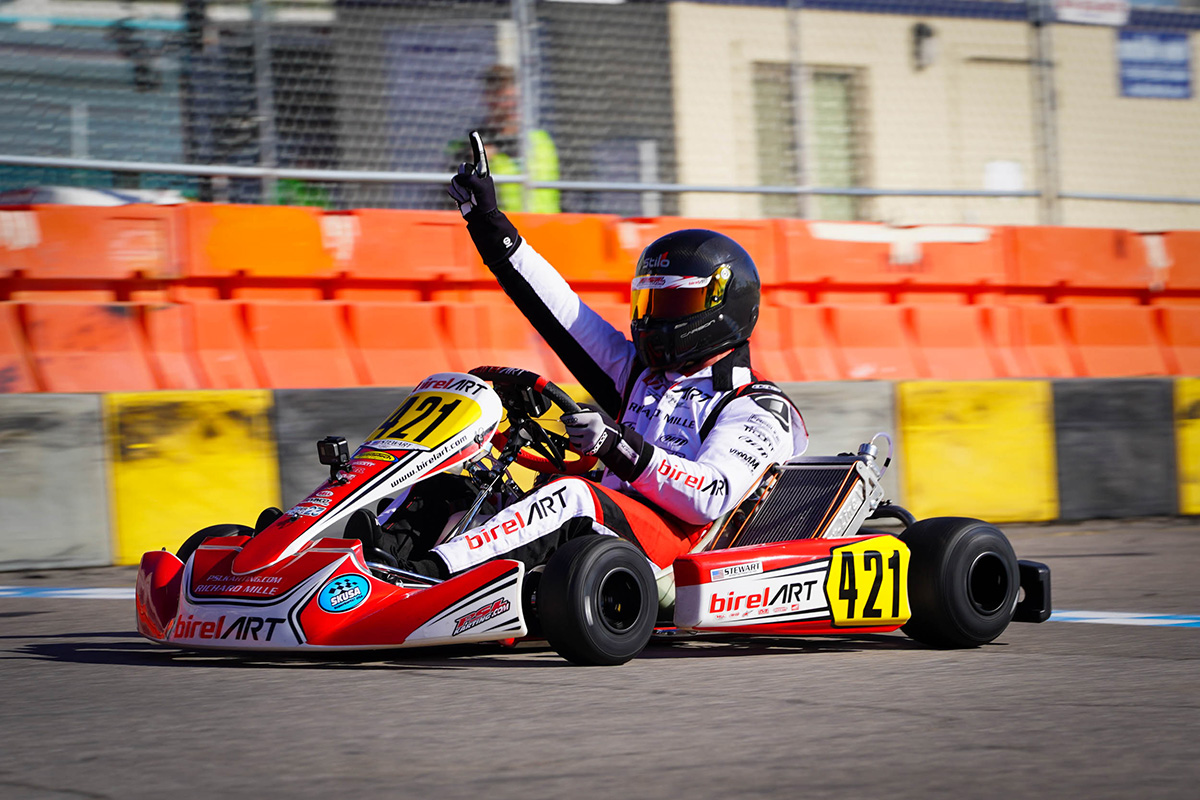 Ending the 2019 karting season on a high note, Birel ART North America left behind the sights and sounds of the 23rd annual Superkarts! USA (SKUSA) SuperNationals with some hardware. In a week that featured cold, rain, wind, sunshine and some incredible on track battles, the Red Army concluded their campaign with one SuperNats victory and six podium results including three Vice Championship honors.

“The SuperNats was extremely busy for us this year with over fifty drivers from eleven different countries and several dealers from our outstanding dealer network,” explained Dominic Labrecque. “It was a ton of work to organize everything, but I am happy with the end results and the efforts put forth by all the drivers and crew.”

Leaving Las Vegas with a SuperNats title to his credit was G2 competitor Nathan Stewart. After claiming the pole position on Thursday, Stewart went forward to put together a trio of solid heat race results and maintain his inside front row starting position for Super Sunday. Looking to cap off the weekend in style, Stewart drove his Birel ART to victory providing the elite level karting program another check mark on their success story.

A pair of G1 competitors found their way to the podium as perennial front runners Jordan Musser and Ryan Kinnear finished second and fourth respectively. Musser scored three heat race wins and scored the pole position for Sunday’s main event only to fall just short in the final. Kinnear started Super Sunday from outside row three and methodically worked his way forward to stand on the SuperNats podium in fourth.

Marjin Kremers was one of the drivers to beat in the KZ class and showed his pace throughout the week. Qualifying on the pole position and claiming a trio of heat race victories, Kremers battled at the pointy end of the field on Super Sunday to finish second for the second year in a row. Michael Stevens showed top-ten pace in a stout field of KZ competitors as was noted by his tenth place qualifying effort while Vincenzo Sarracino crossed the line eighth on Super Sunday to garner a top-ten result.

Newly named Birel ART North America driver Jake French found his way to the podium in the Pro Shifter category. Showing consistency through the heat race flight format, French put his Full Gas Motorsports entry on the outside of the front row for the start of the main event and maintained his position when the final checkered flag flew adding another impressive result for the Birel ART North America squad. Austin Wilkens qualified in the fifth position and put two in the top-ten as he joined French with his seventh place result. In the Pro Shifter 2 category, Greg Alverez ended his weekend in ninth.

X30 Masters competitor Jess Peterson turned his seventh place qualifying effort into a fourth place podium result on Super Sunday as he took advantage of some post-race penalties to advance forward. Fellow Birel ART North America teammate Michael Patrizi looked to secure the fourth position before contact on the final lap of the event pushed his bumper back and he was reprimanded with a post-event time penalty.

Honorable mentions go out to Mini Swift driver Caleb Gafrarar who battled near the top-ten and Jack Shrady who put his Birel ART North America machine in the top-ten during Thursday’s qualifying. Jamie Day qualified eighth in X30 Junior while Nick Ramirez was fourth in KA100 Senior, but lady luck would not be in their side during wheel-to-wheel competition. Additionally, Canadian Ben Cooper showed great pace in X30 Senior qualifying and throughout the heat races to start SuperSunday in the fourth position.

Labrecque continued, “All of our drivers showed great speed all week. Wish we could have had more victories to our name, but with challenging weather conditions throughout the race week, taking home six podium results is a true accomplishment.”

With the SuperNats now complete, 2020 is on the horizon and Birel ART North America is looking forward to getting started.