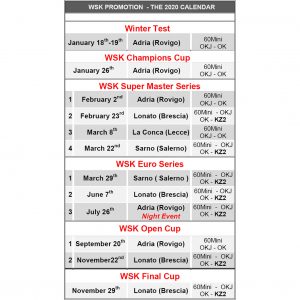 WSK Promotion has announced the new 2020 racing season. The cooperation between WSK and all the major Italian circuits continues: these circuits will host 11 events, from January to November across the whole season. As usual, many events have been scheduled in the first months of the year. The international categories OK and OK Junior, together with the 60 Mini, will take part in all the competitions, while the KZ2 will participate in seven events.

2020 starts from Adria. Main event: the Night Event at the end of July.

Besides the two iconic WSK series – the Super Master Series and the WSK Euro Series – there is another outstanding event which characterises the 2020 season: the WSK Open Cup. The Cup has two stages, the first in Adria and the second in Lonato. The two traditional single stage competitions  – the WSK Champions Cup and the WSK Final Cup – will open and close the season. This is the structure of the WSK season, whose preparation is in full swing. Also, the participation is open to all categories (KZ2, OK, OK Junior and 60 Mini) in the three events of the WSK Euro Series, which confirms its main event of Adria: the Night Event which will close the European Series on the 26th of July.