eKartingNews.com Driver of the Month: October 2019 – Jordan Prior 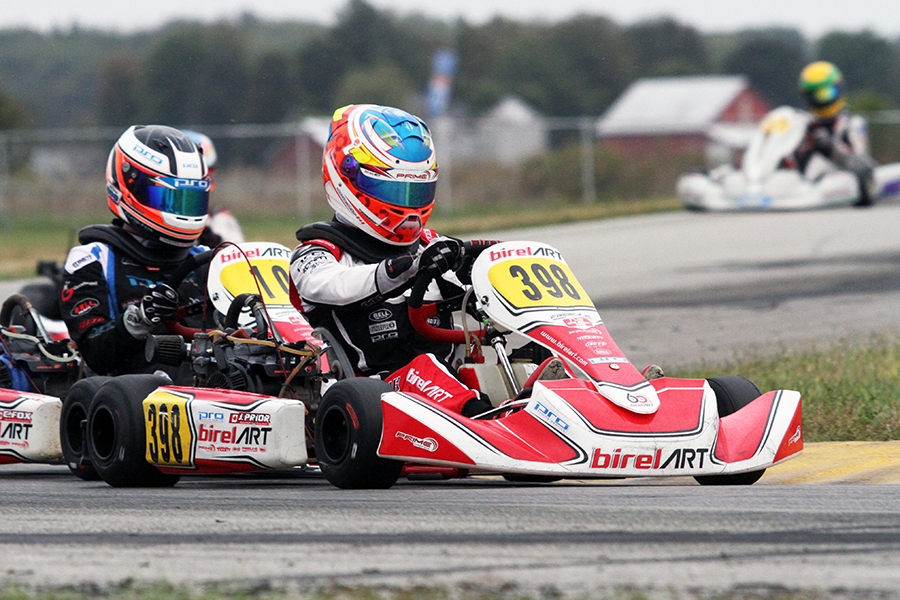 Jordan Prior drove to victory at the Cup Karts Grand Nationals 3 in CIK Medium (Photo: EKN)

The close to the 2019 season is upon us, and grassroots racers from all over North America completed the year back in October. The Cup Karts North America Grand Nationals have become the ceremonial finale, big daddy of the all, event for Briggs & Stratton 206 racers. Promoters Greg Jasperson and Steve Vermeer have put together a grassroots based program that not only has gain massive support from the industry, but the racer themselves. The 2019 edition, or Grand Nationals 3, welcomed 281 entries in eight categories to crown this year’s champions. Among them, 18-year-old Jordan Prior from Ontario, Canada.

Racing under the Prime Powerteam banner, the 2019 Canadian Karting Championship title winner was among the 71 drivers to compete on the weekend in the CIK Medium category, the largest field of the event. Prior opened up the event with fast lap in qualifying, edging out Florida’s Corey Towles by 38 thousandths of a second.

Three rounds of heat races in the A,B,C,D format determined the line-up for the Sunday main event. Prior was edged out by defending champion Gary Lawson in the opening heat race, by a margin of three hundredths. Prior came back to grab the win in his second heat race, this time just ahead of California standout David Vasquez. Prior reached the line first by 39 thousandths. Rain hit that New Castle circuit for the final round of heat races Sunday morning, with Prior showing off his rain skills to drive away to a 1.6-second advantage. This put Prior on the front row for the 14-lap main event.

The rain had left the area and with the CIK Medium class last in the order, the field competed on dry Vega tires. Prior led the field to the green flag but was quickly shuffled back. By the halfway point, his Birel ART machine was back in seventh. Thankfully, things never settled down at the front as shuffling took place throughout the 14-lap event. In the closing laps, Prior was able to climb his way forward, and put himself in the right position as the final laps came.

Prior put himself into the second spot, behind the defending champion Lawson. The Canadian made his move at turn five, getting inside of Lawson and was able to assume the lead. Vasquez came with him, creating a battle for second in the corners after. This allowed Prior to pull away, and reach the checkered flag first. Prior becomes the third different driver to claim the class victory, the first Canadian to do so.

Earlier in the day, Prior ran fifth in the CIK Heavy category, where teammate Curtis Fox scored the victory. The two Canadians were the only drivers to stand on the podium in both CIK Medium and CIK Heavy, with Prior fifth in Heavy and Fox placing fifth in Medium.

Prior adds the CKNA Grand Nationals 3 title to his growing list of accomplishments gained during his young career. Jordan has a busy 2020 season planned, beginning with racing in Florida this winter before the season in Canada returns with the HRKC, TRAK, MIKA, Ron Fellows Championship, Interclub Championship, Canadian Open, and the 20202 Canadian Karting Championships all on his schedule. Of course, he hopes to defend his titles at home and at the Cup Karts North America Grand Nationals 4 as well.

October 2019 EKN Driver of the Month – Jordan Prior 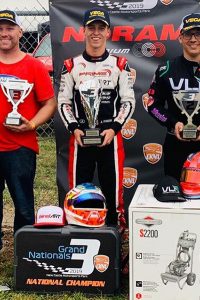 Chassis: Birel ART AM29
Engine/Engine Builder: Briggs LO206/Pro Racing Engines
Sponsors: N/A
Series You Compete In: MRFKC, HRKC, TRAK, MIKA (all out of Ontario, Canada)
Years Karting: 5
How did you get started in karting? My grandpa took me to an arrive and drive series
What has been the high point in your racing career? Winning the Canadian Nationals and Grand Nationals in the same year (2019).
What are your goals in racing? To keep racing, and to be involved in development of young racers.
In a few words, how would you describe your driving style? I like to be aggressive when I drive, especially in the corners. However, when I race, I am patient, I watch for opportunities and make my move.
Funniest moment at the race track? When I drove Frankie’s mini Rok this summer, it was a tight squeeze.

What do you do when not at the track? YouTube, Golf
What are your goals outside of karting? Get accepted into University for the fall
What type of street car do you drive? Honda Civic Coupe
What type of street car would you like to drive? Mustang
What are your pet peeves or things that irritate you? People who don’t maintain their karts
What do you think could be done to improve the sport of karting? Make the sport of karting more mainstream in local media, to bring awareness and draw interest to the sport. More people need to hear about it as many people have no idea it exists.  You hear about the local baseball and hockey teams, let’s hear more about the local tracks and the talent within the sport.

What are your favorite aspects about the sport of karting? The community and respect that the Senior Briggs drivers have for each other.