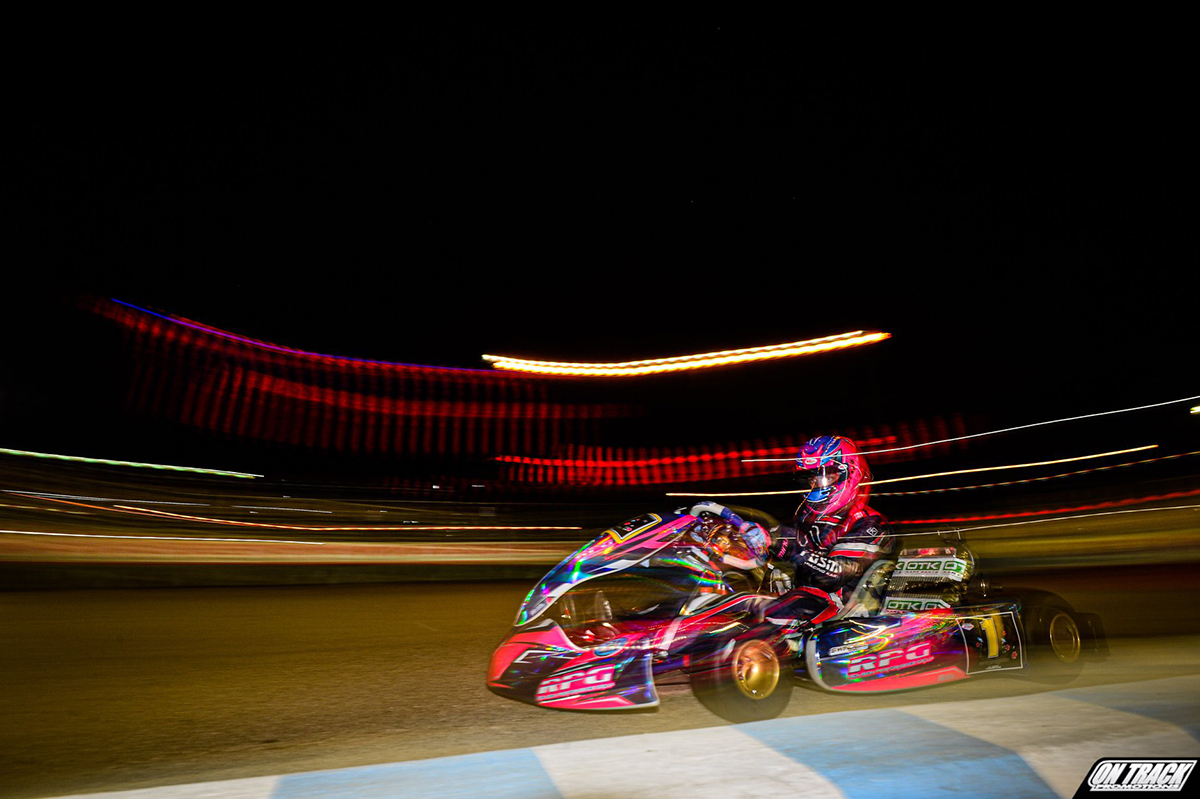 The Superkarts! USA SuperNationals 23 is underway at the Rio All-Suite Hotel & Casino in Las Vegas. Wednesday was a wet day and the rain continued into Thursday with the morning groups nearly all wet until qualifying. The track eventually dried as the timed sessions begin, and gave the afternoon groups a dry but cold track. Temperatures seemed to be in the 40s all day, with a spike into the 50s as the sun broke through the clouds briefly.

X30 Junior is the first class on the track and with the 76 drivers split into two groups. The unfortunate part of their qualifying sessions was the track conditions. The sun was out and it appeared to be a drying track. Some gambled with dry Evinco tires while others continued with the wet MG tires. The long 12-minute session ended with the dry tires finally coming in. The second group hit the track, all on dry tires and were more then four seconds quicker thus implementing the 101% rule. That put Q2, the slow group, to be merged with Q1 for the heat group lineup. Italian Andrea Kimi Antonelli (KSNA / Kart Republic) set fast time in the Q1 with a 47.235 while Guilherme Figueirdo (HR / Tony Kart) was the fast driver in Q2 with a 51.256. The rest of the groups were merged to form the ABCD groups for the heat races, which should see a lot of shuffling for position. 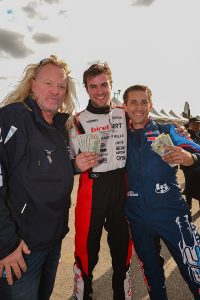 The Pro Shifter / Pro Shifter 2 category welcomed a new format for qualifying, including a 20-minute hot pit shootout for $1,000 to fast time and $500 for second. While two-time defending winner Billy Musgrave (MRC / Croc Promotion) was the quickest in the initial 12-minute session, posting a 42.892 lap, Rory van der Steur (CM / Magik) was the quickest in the shootout. His 42.516 was the provisional pole position with the $1k set to be his until an error regarding his exit and entry to the track during the hot pit cost him the payday. Officials laid down a 10-position penalty for the safety issue, similar to passing under yellow, putting him 11th on the grid for the three heat races. The moved Musgrave to P1 and Jake French (PSL / Birel ART) to second. Kyle Apuzzo (LRG / CompKart) was the quickest Pro2 in the field, fourth overall behind 2018 SKUSA Pro Tour champion AJ Myers (CRG Nordam).

All of the morning groups utilized dry tires for the first time in the event in qualifying, which put the drivers and teams in a guessing mode as to set up. Nitro Kart driver Spencer Conrad grabbed fast time in the Micro Swift division, posting a 52.957. Mini Swift saw SKUSA Pro Tour champion Kai Sorensen (Supertune / Tony Kart) come out of the 12-minute session with a fast time of 51.015 to start from the pole position in all three heat races. The morning groups ended with KA100 Senior, with a number of drivers holding the provisional pole in the 12-minute run. California driver Jake Drew (FW / CompKart) edged out North Carolina’s Pauly Massimino (MDR / Kosmic) by nine hundredths of a second for the pole position with a 47.496.

The X30 Senior class also took part in the 20-minute shootout for $1,000 on the line. Defending winner Ben Cooper (PSL / Birel ART) set the bar for the top-20 going into the session as the only driver into the 44-second bracket (44.983). The majority of the drivers sat on the grid for the first 10-minutes, with the hot pit not utilized by only a few. Four-time SKUSA Pro Tour champion Ryan Norberg (RPG / Kosmic) came out with quick time (45.015) to earn the $1k payday with 14-year-old Jak Crawford (Nash / FA Kart) earning the $500. Cooper came out of the session third with 2017 World Karting Champion Danny Keirle (Fullerton) in fourth, making the top four a very experience group heading into the heat races.

The X30 Master class was broken up into two groups, and thankfully no weather conditions made it difficult to merge the two as it was based on time. And that was led by three-time race winner Kip Foster. The Aussie racing on his KF Kart posted a 45.762, edging out 2016 winner Renato Jader David (Orsolon / Tony Kart) and SKUSA Pro Tour champion Matt Johnson (Nash / FA Kart). 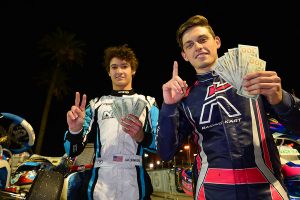 The final three classes had the #1 plate end their sessions in the same position. Recent KZ World Karting Champion Marjin Kremers (PSL / Birel ART) set the mark in the category for qualifying, with a 42.281, just a tick quicker than Noah Milell (RPG / Tony Kart). Mathias Ramirez was the top USA driver in the session, putting the Trackmagic kart in fourth behind Maximilian Paul (DRT / DR Kart). SKUSA Pro Tour KA100 Junior champion Connor Zilisch (LAK / Tony Kart) led a wild qualifying session. Nearly five drivers held the top spot on the final lap of the 12-minute run, with the top-12 drivers posting their fast time on the final circuit. Zilisch’s 48.142 was best ahead of defending race winner James Wharton (Parolin) with Streets of Lancaster Grand Prix winner Max Opalski (RPM / Tony Kart) in third. Four-time SKUSA Pro Tour champion Jordon Musser (PSL / Birel ART) set the bar in the G1/G2 session, lapping the circuit with a 43.114 lap time. Aussie John Grother (DKC / Sodikart) was only 58 thousandths off his time with three-time winner Bonnier Moulton (MSquared / Tony Kart) in third. Moulton is the only driver to compete in all 23 editions of the SuperNationals, and is one of 12 drivers vying to join Connor DePhillippi in the four-win club at the SuperNationals.

Friday is going to be a busy day as wheel-to-wheel action begins. Two rounds of racing for the 10 race groups, 12 categories will take place as the track is forecasted to be dry for the entire day, with temps into the 50s.