EKN’s Paddock Insider is part of our Trackside coverage, bringing you notes, updates and breaking news as it happens. The article will feature notes from trackside at the Superkarts! USA SuperNationals 23, which is being held this week at the Rio All-Suite Hotel & Casino in Las Vegas, NV.  This is insider info will not be seen anywhere else. Please feel free to comment and discuss our coverage and today’s action in the EKN Global Members Discussion area below. 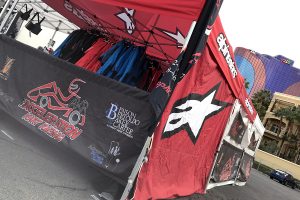 One thing that has been a consistent at the SuperNationals is the Cooksey family. The owners of Acceleration Kart Racing has been part of their home event here in Las Vegas for many years, not only as an industry member but also as competitors. Curtis Cooksey, a veteran driver with multiple championships and major victories both here in the USA and internationally, operates the company that began over 20 years ago. ShopAKR.com is among the largest internet-based karting sites in the world, representing many products from around the world. Their main focus is to provide karting consumers with the best equipment to get you on the race track. AKR has also been a major supporter of EKN from the beginning, and remains one of the longest running associates to the site, now reaching a 15-year straight partnership. At the SuperNationals, they have been the SuperSunday presenting sponsor for the last seven years. Thank you to the AKR and Cooksey family for all they do for EKN and for the sport of karting. 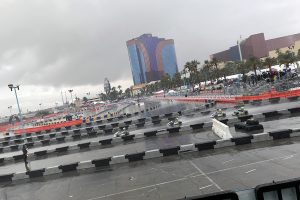 The rain is back. To be honest, it has never really left. The morning sessions ended under sunshine yet the track was still wet for the beginning of the afternoon classes. The first few groups remained on wet tires until the track dried. For the start of Round Four last night, a quick shower hit the track, sending many of the grips back to the pits with no time to change over to wet MG Tires, or not wanting to risk damage. Rain returned early this morning and has soaked the track immensely. The long back straight appears to be the biggest issue with the rain as large standing water puddles are causing the karts to hydroplane. The opening shifter sessions proved that and SKUSA has taken a 30 minute break to help eliminate some of that standing water. Unfortunately, the parking lot is not designed for drainage. 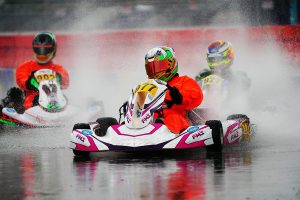 It has been something we have been watching for the last week – all the weather apps. The chance of rain increased from 30% to 40%, and continued to increase. When we wrapped up the SKUSA Pro Tour Awards Ceremony, it was 100% with the winds picking up and precipitation coming down. Rain has been in the area for hours, coming down at a consistent pace. Nothing like a thunderstorm, or the amount of rain that came during the SoggyNats 2013, but enough to keep the paddock wet, the track building up puddles, and forcing racers to decide if it is worth going out in the rain. As of 10:30am local time, the rate of rain has decreased from earlier in the morning hours and it is now a hit or miss for the remainder of the day. The good news, today should be the only day of rain falling as Thursday through SuperSunday are forecasted for zero precipitation. Due to the weather for the morning, the qualifying groups will be decided by the Round 6 session tomorrow for X30 Junior rather than Round 4 today. 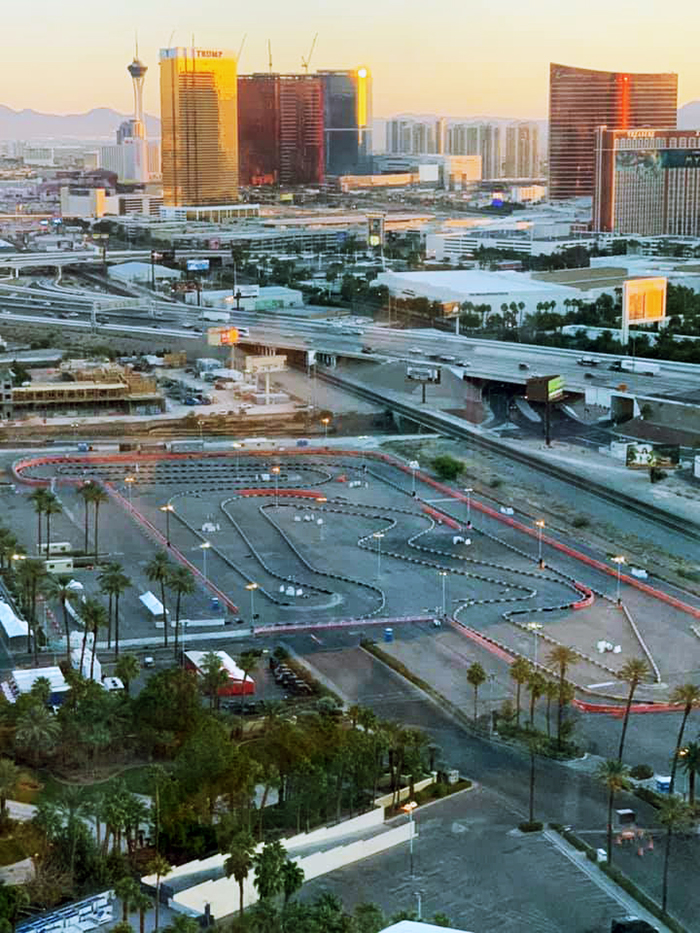 The nostalgic home of the SKUSA SuperNationals has become the Rio All-Suite Hotel & Casino. Of the 23 times the SuperNationals has been held in Las Vegas, the 2019 edition makes it 11 at the Rio. When you have been to all of them, as we have at EKN, it feels like home when you walk in off Flamingo Road. Just over 500 competitors will compete over the five days to be crowned the winner on SuperSunday with the Las Vegas Strip in the background.

This year’s circuit is very similar to the 2018 layout, composed by Bonnier Moulton, Howie Idelson and Wesley Boswell. There are sections of the track that were constructed differently, and more closely resembles the actually diagram. During the track walk Tuesday evening, that became more evident. The front straight is a bit longer, with turn one pushed deeper toward the VIP area that will be filled throughout the week. That equates into a longer run into turn two, setting up for great passing spots in each corner. The run into three and down to four is the same. Turn four is a bit tighter than last year. It was more of a double apex in 2018. Now it seems much more like a 180 degree turn. The kickback turn five was a curb last year, while this year it is just walls. That could come into play once again on SuperSunday. Turn six is very similar to last year, and leads into the two esses section. Turn seven-eight and nine-ten are much more defined. Last year was a straight shot, flat out in shifters even. This year’s construction has the two turns in each section much more defined. Those sections should separate the good from the bad. Turn 11 leading onto the straight is a tighter radius, however, has the wide exit and sets up for the long run down to turn 12. There, the apex was pushed in more, which makes the exit point down further toward the start/finish line.

EKN will have on-board footage later today, depending on weather conditions and how on-track action unfolds during Wednesday.