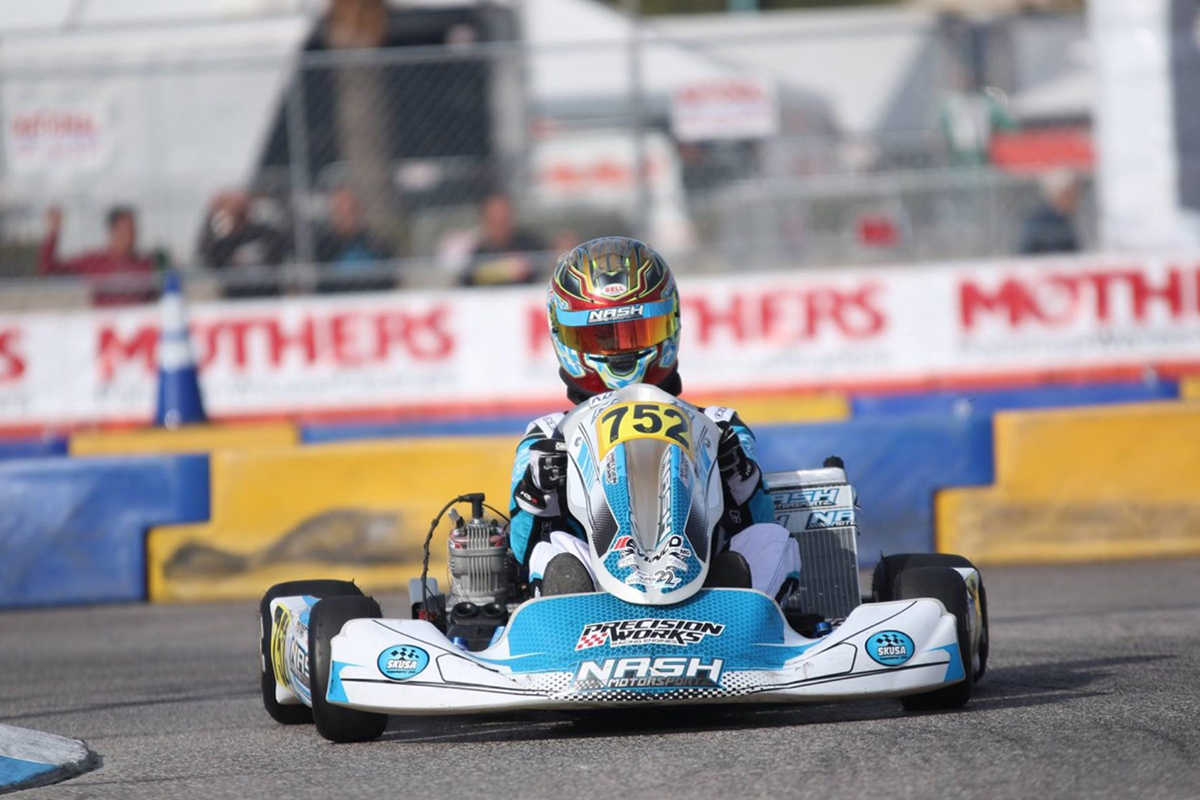 For Jak Crawford’s first ever Superkarts! USA (SKUSA) SuperNationals event in 2013, he spent SuperSunday visiting the Hoover Dam. Finishing 83rd of a field that featured close to ninety drivers, the Texan didn’t even have the chance to compete in the Last Chance Qualifier. Between the cold, the rain, the crashes, the kart not starting in the rain on the grid, and with dad as the mechanic in those circumstances, it just was a horrible experience for the eight-year-old racing in only his second national event. It was, simply, a year to forget.

The next year was a breakout year for the karting talent and he would reach the podium in Las Vegas, and in doing so, was surrounded by kids older than him. Every year since that first horrible result in 2013, Jak has contested for a podium, or even wins, at the prestigious end of the year karting event.  Almost always left off the list of drivers to contend on temporary circuits in Las Vegas, Jak has been an underdog with little respect from the karting pundits, but his finishes don’t lie. Since 2013, Jak has amassed two wins plus four other podiums, five top-five results and six top-ten finishes in the past five years.

In 2014 Jak was on the five-step SuperNationals podium in fourth. In 2015, he again finished on the podium in third while also claiming the Rotax Mini Max win in the one and only event held in Las Vegas by the former MaxSpeed Entertainment group. In 2016, a race win or podium was at his grasp until contact on the final lap while battling for the lead sent him down the running order to finish just inside the top-ten. 2017 saw the now formula car driver return to stardom claiming the X30 Junior SuperNationals victory while in 2018, he was again on the podium in second just missing out on a win after dominating the week’s on track sessions for a second year in a row. Fast forward to this week, Jak will compete in the X30 Senior category and look to return to SuperNationals superiority.

“Some people just know how to get around temporary circuits and Jak Crawford is one of those racers,” explained Seth Nash of Nash Motorsportz. “It suits his driving, and he especially excels before the grip comes in on Sunday.  His racing level just rises on the big SuperNationals stage and while he hasn’t raced karts much in 2019, overlooking him for a podium spot in his first senior attempt is a mistake, even against this older cast of characters.”

Re-united with his long-standing California-based Nash Motorsportz team, Crawford travelled west a few days early to get one day on track in order to re-familiarize himself with the Nash kart package. The last time he was in a kart, be it practice or a race, was this past summer at the SKUSA ProTour SummerNationals at the New Castle Motorsports Park.

Nash added, “I had to have him correct a few things Friday when we practiced at CalSpeed, but he immediately listened and reacted to what I told him, as he always does, and if all things are equal in Vegas, he will have as good a chance to win as anyone.  If it rains a day or two, that might be to his favor because he adapts very well to changing conditions.”

“The SuperNationals event is my favorite event in karting,” explained Crawford. “Partly because I race so well in Las Vegas, but also because it is not a circuit that you can practice on in advance. You show up and race, and people can’t camp out there a week or two testing.”

Crawford continued, “Based on every year we come here, I should be fast in the beginning, and then we will have to make sure that I keep my speed compared to others improving as the event rolls into Sunday.  Sunday is always difficult because the grip comes in and if you have been fastest earlier in the week, it is hard to get ahead of the adjustments needed to race for the win on Super Sunday. This is the main reason why I didn’t win last year as a driver outside the top-ten took a risk that we couldn’t take from my pole position.”

This will probably be Jak’s last year at the SKUSA SuperNationals event due to some other commitments that have been made in formula car racing. Not having much experience in a kart in 2019 and being a rookie in the senior category may be seen as a negative to others, but to him and his team, it is a chance to do something special, not unlike what he has been able to accomplish accumulatively in all his SuperNationals events since his first of several podiums in 2014.

Jak Crawford would like to thank Nash Motorsportz, Chris Freckelton and Precision Works Racing Engines, OMP Racing Gear, and Bell Helmets for their help and support this weekend and onwards into the future.For more information on Jak Crawford please follow him on Facebook, Twitter and Instagram by searching Jak Crawford Racing. Jak’s marketing website is jetpakjak.com.