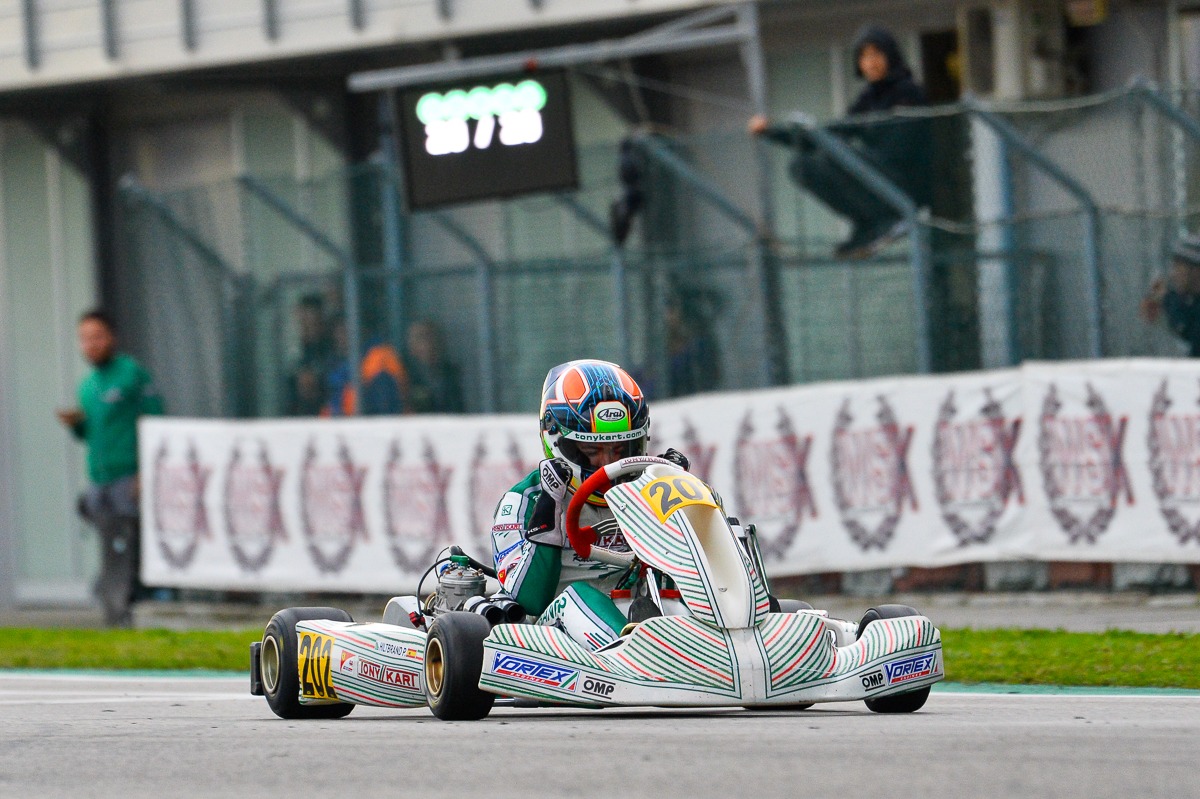 In the WSK Final Cup run on the Adria Karting Raceway, Pedro Hiltbrand wins in the OK category ahead of Joseph Turney and Lorenzo Travisanutto. In OKJ, Nikita Bedrin ends on the second step of the podium.

2019 couldn’t have ended better for the Tony Kart Racing Team, great protagonist of a WSK Final Cup from which we come back home with the first, second and third final place of the OK class. At the Adria Karting Raceway, Pedro Hiltbrand closes ahead of everyone, protagonist of a nine-position comeback and reaching the highest step of the podium. In the final race, Pedro joins the fight for the victory with two teammates: Joseph Turney, second, and Lorenzo Travisanutto, third. The amazing result comes after a weekend characterized by extremely changeable conditions, where the Tony Kart Racer 401 R powered by Vortexproves once again to support the drivers at best in every moment of the race.

For Pedro Hiltbrand and Lorenzo Travisanutto, recently together under our tent, the feeling with the Tony Kart material is excellent: Lorenzo, besides the third final place, also gains the pole position on wet track, two heats and a prefinal with best lap. Pedro, on the other hand, makes the most of his potential in the decisive race, driving in an excellent way with slick tyres on an asphalt, gradually getting dry. He also centres the best lap in the Final.

Also Joseph Turney is always at the top with two victories and a second place (and best lap) in prefinal, before closing, as mentioned, second in the Final.

Great weekend also for Josep Maria Martì, despite an uncertain start from the second position of the final. First, however, the Spaniard shows all the great deal of progress made so far with the second position in qualifying and two second places between prefinal and the heats, besides a best lap. Considering the performance shown in the last part of the season, Martì can certainly look to his 2020 in the OK class with confidence.

In OKJ, Nikita Bedrin is the author of another important weekend, obtaining an excellent second place in a final run with rain tyres on an asphalt with unpredictable grip. For Nikita, author of the pole position, also a second place in prefinal and third place in the Qualifying Heats ranking, where he gains a victory and a second place with best lap.

A few understandable difficulties for Aiden Neate and Harley Keeble, who continue their path of growth with our material in a wet and very instructive weekend.

From the Adria race, also the very young drivers engaged in 60 Mini bring home a lot of experience. They proved to be fast, with the fifth position in qualifying gained by Jules Caranta, together with James Egozi in top ten. All our standard bearers are protagonists of great battles in the heats: among them, at the end of the final, the best, after a comeback of eight positions, is Jimmy Helias.

The WSK Final Cup closes the international appointments of the Tony Kart Racing Team. We will now get back on track soon in view of the 2020 season, with lots of new targets and talents to grow under our tent.