The Race for the WKA Grand National Eagle 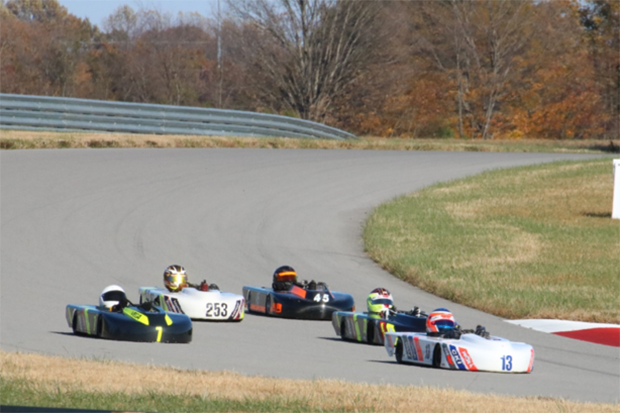 After freezing rain and low temperatures last year kept many karts off the track on Friday and cold weather looming in the forecast many racers were hesitant to make the trip back to NCM Motorsports Park for the last race on the WKA 2019 schedule.  With the racing Gods looking down, the weekend turned out to nothing but clear and sunny.  This was also the last chance for many karters to secure the points chase for WKA’s Road Race National Championships.  While this race closed out a fantastic racing season it also brought some sadness to the racing community.  Last week we lost a great man and friend to all in this little world we call karting. Randy Holewski was an avid enduro kart racing fan who started racing when he was 15 years old. He shared the love of the sport with his daughters, Stacey and Amanda and later his grandson Carson.  He was a great supporter of the sport and when he wasn’t out there on the track, he was always on pit road cheering on not only his daughter Amanda but also his grandson Carson.  He will be missed by all but never forgotten.

The 1st race of the weekend was the CIK LO 206 Sprint which brought 14 karters to the grid.  With John Morris leading the class in points, would he be able to secure the wins in Kentucky?  At the drop of the green flag number 118 Jamie Bradford took the lead and never looked back.  He continued this pace for the entire 30 minutes bringing home the checkered flag with a huge lead over 2nd place Stephen Gibson.  Sunday’s race was again looking exactly like Saturday’s race with Jamie Bradford taking an early lead.  Except this time number 707, Ryan Gensheimer was hot on his tail.  The battle continued throughout the race with Jamie, Ryan and Joel Negus.  In the end Jamie took the win with a 1 second lead and also took home 2 Grand National Championship eagles this weekend.

The 1st race also had the IAME Sprint class racing which held some great racing as well.  Jason Lorang came to Kentucky leading the IAME Sprint class over Gary Sircy, but would he have the speed and skill to bring home the points championship for 2019?  The battle for the top positions started early and continued till the checkered flag was waved.  Coming down the straightaway on lap 1, Jason Lorang was leading the charge in 1st place followed by Brad Adams and Richard Buckley.  Ultimately Jason kept his lead over Brad Adams and took home a Grand National eagle.  Sunday’s race in IAME started out a lot different with a mishap in turn 1 causing drivers to scatter every direction.  Fortunately, most drivers were able to keep things going including Jason Lorang, but he was at the back of the pack.  With lady luck on his side he was able to drive his way back to the lead position and take home another eagle.

“I think the cold weather which has become the normal in Bowling Green had us all getting creative to stay warm, but the weekend warmed up nicely!  Even with the cold temps, I found myself over a second a lap faster in both karts over last year, which helped me get the checkered in all 4 races this weekend! What a great way to finish the year! Now, it’s time to focus on Daytona and 2020.”

The Unlimited class on Saturday also brought 14 karts out to fight for the checkered flag.  Unfortunately, the race was cut short due to 2 red flags.  One right after the start of the race and another one about halfway through.  Thankfully there were no major injuries to either driver.  Most of the Unlimited’s were only able to make 5 laps in Saturday’s race, which lead number 111 Larry Dobbs to take home the eagle.

Sunday’s race painted a very different picture in the Unlimited class which was able to run the full 30-minute race. Right from the start Sidney Danals took the lead from the rest of the pack with Denver Liabenow running in second.  This pace continued for the full race leaving Larry Dobbs unable to take another eagle. Even though Denver Liabenow took home a 2nd place finish in Sunday’s race it was just enough for him to secure the points championship over Mike Tracy.

The last race of the day on Saturday was full of action with 6 classes, each racing for the championship.  The TAG Heavy class brought nothing but domination to the track with Jason Lorang leading the way with a 37 second lead over 2nd place Jarrett Bank and 3rd place going to Adrian Dale.  Even with the cooler temperatures he was finding the speed coming out a second faster than last year.  This win at NCM Motorsports Park helped him secure the points championship in TAG Heavy along with IAME.  Lady luck was also smiling down on Jason as he once again took home 1st place in Sunday’s TAG Heavy class.  Unfortunately, she was not spreading the luck to anyone else as Jason Lorang again snagged the 1st position with a full minute lead over 2nd place, Lucas Mauer.

With recruiting new people to the road racing side always being the topic of discussion amongst karters, it was nice to see newcomer Evan Stamer out on the track in Kentucky.  Evan has a major presence in the sprint world but has started making a name for himself here on the road race side.  This past weekend he took his place in the Yamaha Senior class with racing veterans, Randy and Rick Fulks, Brad Zoeller and Patrick Olsen.  On Saturday, Evan settled in behind Patrick Olsen at the start of the race, where they battled back and forth for a few laps.  Around the halfway mark Evan tried passing Patrick for the lead but regrettably a red flag was thrown and ended the race, which landed hime a 2nd place finish.

“I wish the race would have continued though because it was panning out to be an awesome race to the end, say Evan.”

Sunday’s race in Yamaha Senior was also a fantastic race for Evan and for the spectators.  For the first couple laps of the race the battle was tremendous as each driver was relentlessly fighting for 1st place.  Sadly, on lap 3 Rick Fulks ended up blowing a motor and Brad Zoeller dropped out due to mechanical issues, but this didn’t stop the remaining 3 from fighting for the checkered flag.  The battle continued but veteran Randy Fulks had just the right setup as he was able to pull away from Patrick Olsen and Evan Stamer winning the Grand National Eagle for Yamaha Senior.

“The race on Sunday was definitely high up on my list of the most fun I’ve had in a go kart, me, Rick and Randy Fulks, Patrick Olsen and Brad Zoeller were all battling and going back and forth for about 4 laps at the beginning of the race. It was such an honor to be able to race against and go head to head with the most legendary drivers in karting at one of the most legendary tracks in the U.S. NCM was such an amazing facility, the track was super fun, it was very smooth and flowy.  It was overall a great track for the karts we were racing. I hope we will be able to go back soon!”

With NCM Motorsports Park being the last race of the 2019 season I would like to thank all the racers for their continued support and to the sponsors that help support the different classes. Vega Tires for their support of the WKA Road Race Series.  Would also like to send out a huge thanks to Robby Harper for his dedication as the Road Race Director.