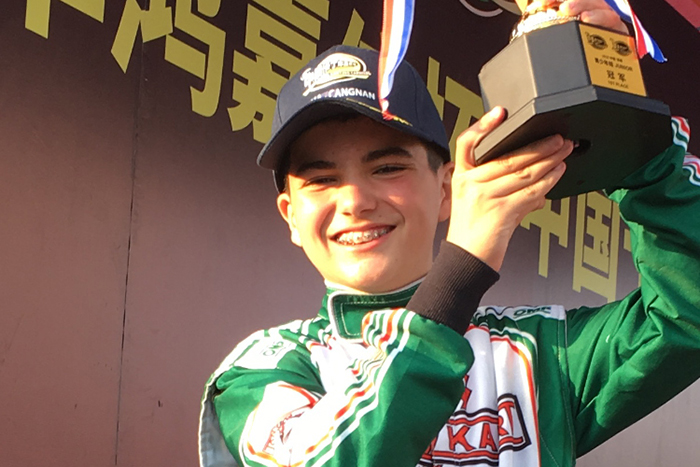 Traveling from his home state of California halfway around the world, junior karter Frankie Mossman descended on Wenzhou, China during the week of November 6th. Competing in the China Karting Championship event with Mars Racing Management, Mossman returned home with a championship trophy as he dominated the X30 Junior field.

“The race was absolutely outstanding and the event itself was something that I have never seen before,” explained Mossman, “There was no expense spared in putting on this race as Mars Racing Management, and even the Republic of China government, got behind the entire event. We had the kart dialed from the beginning so at the end of practice we had big expectations on how the weekend would go.”

With an event that featured 160 competitors and 40 international drivers, Mossman qualified his Mars Racing Management Tony Kart on the front row as he secured the pole position based on lap time. Unfortunately, following the session, Mossman was issued a disqualification for a track limits violation that put four wheels over the line in turn six. Asking the officials for evidence, Mossman and crew were shown the violation via the video marshaling camera system and accepted the penalty.

Forced to start heat one from the tail of the field, Mossman was motivated to begin his march forward. With a pair of heat races to work his way to the front, the Chris Wehrheim tuned Tony Kart drove from last on the grid to ninth in heat one scoring the fastest lap of the race. Heat two saw even greater progression as Mossman was able to steer his way to a second place result, again starting from the back of the field and scoring the race’s fastest lap. With combined heat race results setting the grid for the main event, Frankie would roll off for the weekend’s final inside row three in the fifth position.

Mossman added, “I was able to get a good start and by lap three, I was in the lead. From that point forward it was all about hitting my marks, being consistent and not making any mistakes.”

Working his way to the front with seventeen laps remaining in the twenty-lap main event, Mossman was able to open a gap to his rivals and drive away from the field. In a race that only saw his chassis get better as the laps wound down, Mossman secured the X30 Junior China Karting Championship victory by more than six seconds.

Mossman continued, “A huge thanks to Chris Wehrheim my mechanic, tuner and driver coach for the incredible help and support all weekend long. Also, a huge thank you to Mars Racing Management for this amazing opportunity. I will definitely be promoting this event back in the United States and look to return in the future.”

Before the on-track action began, Mossman and the rest of the event attendees were spoiled with an amazing welcome dinner at the Internationals Hotel in Cangnan, China. The hospitality continued throughout the weekend with friendly and courtesy officiating, a track crew that was second to none and an overall great atmosphere around the entire event weekend.

Returning back to the United States, Frankie Mossman will now take on the X30 Junior field at the Superkarts! USA (SKUSA) SuperNationals. Looking to utilize his momentum gained in China, Mossman will be aiming towards the top step of the podium next weekend in Las Vegas, Nevada.